Aide: Mr. President, we have some important information to discuss with you.

The Don: Is it really important, as I still have 5 holes to go. That was some shot I just hit off the tee, wasn’t it?

Aide: Yes, Mr. President, but I am confused how the ball wound up 30 feet from the green?

The Don: Are you accusing me of cheating?

Aide: Of course not Mr. President. You, cheat?

The Don: I am the most honest person in the world.

The Don: And I have the evidence of my prodigious shot. Hey Lindsey, did you see my last shot off the tee. My caddie has some doubts about it.

Lindsey Graham: Mr. President, I watched in disbelief as that ball soared above the trees and landed near the hole. I was dumbfounded. My shot is still 200 yards from the hole.

The Don: Lindsey, you’re a wuss…So what is this important information?

Aide: I was told to tell you that you need to be briefed about options for Iran and it is time to “Wag the Dog.”

The Don: You want me to get off the golf course to wag a fucking dog? You know I hate dogs. Why would I want to wag one? The sight of one makes me sick. Slimy, smelly, attention seeking. Pet me, pet me!  Which general told you that as I am going to fire him?

Aide: It was actually Pompeo.

The Don: Can’t fire him. He knows too much. You know, the Ukraine thing, the illegal impeachment thing. Well go back and tell Pompeo that there is no way I am stopping my golf game to wag a dog. The only dog I ever want to be around is Conan, the one that helped killed that scum Baghdadi Even so, what the hell does it even mean to wag a dog?

Graham: The expression comes from the saying that ‘a dog is smarter than its tail’, but if the tail were smarter, then the tail would ‘wag the dog’.

The Don: What the hell does that mean?

Graham: It comes down to creating a diversion so what seems like the most obvious thing to look at becomes replaced by something else. If the tail of a dog was shaking the dog’s body you would say: ‘holy shit, look at that; the tail of the dog is wagging the dog’s body.’

Funny thing is that there was a movie called “Wag the Dog” that starred one of your favorites, Robert De Niro, who plays someone who is helping the president with his message to the American people.

The Don: I don’t find that funny Lindsey. That no-talent bastard. Don’t ever mention his name in front of me again. It’s almost as bad as the curse word Obama.

Graham: Never again, Mr. President.  Fuck De Niro. But back to wagging the dog. You know how you hate the impeachment thing. And don’t worry Mr. President, we will make sure you are vindicated. But you don’t want the country focusing too much on that, so if you do something to distract people’s attention, then it helps you.

The Don: That’s good. And I am the master of distraction, so I love it. So who are we wagging?

Graham: Iran? After all, they just stormed our embassy and humiliated us.  You were pretty steamed at your New Year’s soiree about it, which by the way was a blast and once again, I want to thank you for inviting me. Also, it was such an honor to be at the same table as, Eddie Gallagher, the Navy Seal you pardoned. What an American hero.

The Don: Shush up Lindsey. Your groveling is distracting me from making this eagle putt. And why are you talking about seals now, I thought we were talking about dogs?

The Don: Shush. If you make me miss this put Lindsey, I will expose you for you know what.

(The Don putts and misses.) 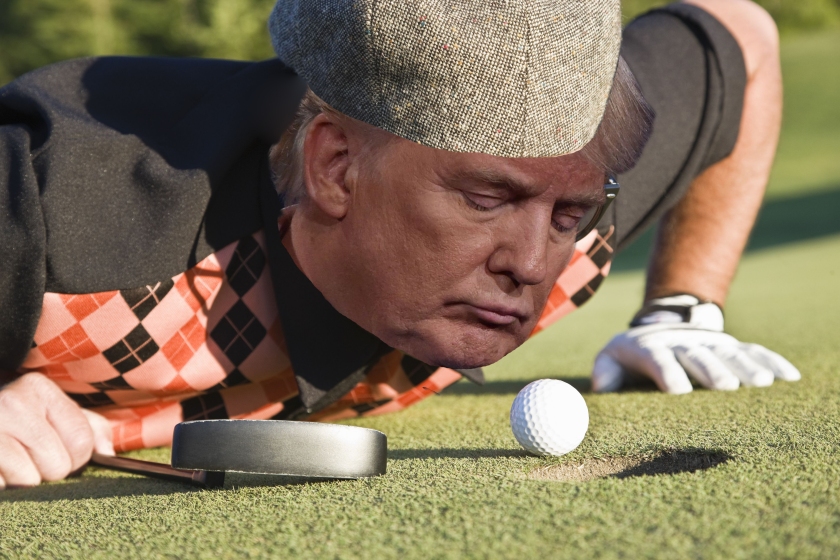 The Don: Lindsey, you saw it with your own eyes. Two shots on a 400 yard hole. Take that Jack Nicklaus!

Lindsey: Mr. President that was one of the greatest holes ever played.

The Don: So now, remind me. Were we talking dogs or seals?

Pompeo: Hi Mr. President. Lindsey told me all about your golf game today. Must admit, at first I was a bit skeptical that you two holed a 400 hundred yarder, but Lindsey has the evidence.

Pompeo: We have intel (wink, wink) that this bad ass Sulaimani is planning to take some actions that will put American lives at risk.

The Don: From the intelligence community?

The Don: But I don’t believe anything  our intelligence people tell me. They are still blaming Putin for intervening in my election and it is clear that it was Ukraine.

Pompeo: I understand what you are saying but we need some intel to allow us to move forward. Rest assured Mr. President, this evidence is kind of like Lindsey’s evidence regarding your golf today. Also, Pence has ‘Lindsey’ kind of evidence that ties Sulaimani to the 9/11 attacks.

The Don: So we really have the goods.

Pompeo; Absolutely. In fact, I have already contacted Russian Foreign Minister Lavrov to let him know what we are doing. And I  heard you spoke to Putin a few days ago.

The Don: Yeah, and Putin says hi. And I really like Lavie. We had a real blast in the oval office a few years ago and the best part is no one even knew he was there until Russia’s media leaked it.

The Don: Anyone in Congress been informed besides my caddie, oops, I mean my buddy, Lindsey?

Pompeo: Of course not.

The Don: Does any other country know our plans?

Pompeo: Of course not.

The Don: Even Bibi?

Pompeo: Nope. Mr. President, not only will you be moving impeachment off the front page, but you will be seen as strong and an American hero.

The Don: Let’s take the motherfucker out then. But one question. Aren’t some going to want to see evidence of an imminent attack to justify this?

Pompeo: Well, let’s put it this way. You have been a master at denying access to evidence regarding the Ukraine thing so we will just keep with the program.

The Don: I have an idea. If it gets too hot, I will call up Bibi and tell him we will withhold military aide until he goes public that the intel was shared with him. 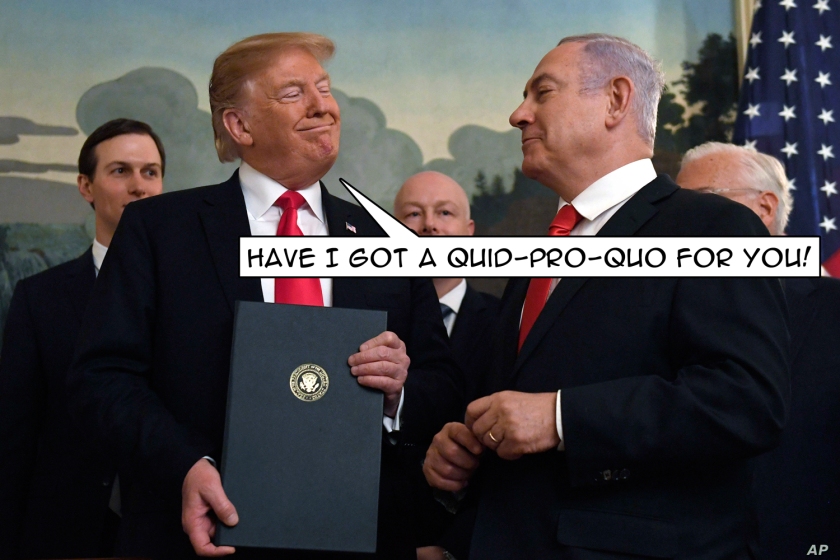 Pompeo: Mr. President, you are brilliant!

The Don: A great genius. That’s what they say about me. Now that we’ve decided to “Wag the Dog,” I would like to put my tail down on the couch and watch some football. Just buzz when the deed is done and I’ll switch to Fox News and watch them hail me as the greatest American president.

Pompeo: Mr. President, it is an honor to serve with such a visionary and American Hero.

The Don: (Turns on TV and sounds of football- helmets crashing.) Wow, did you see that hit? I just love those animals.