This will be my last piece of 2019. 2020 is a year of profound reckoning. Barring a miracle in the Senate (impeachment trial), the power to restore normalcy and advance our democracy is up to us. The great wind bag needs to deflated! My new resolution: The Don defeated, Lindsey Graham and Mitch McConnell beaten, and the beginning of a progressive era in America begins!

In the riveting film, “Inherit the Wind,” Tennessee schoolteacher Bertram Cates (Dick York- think Darren from “Bewitched”) is put on trial for violating a state law prohibiting public school teachers from teaching evolution instead of creationism.

In the film, Spencer Tracy and Frederick March go head to head in a courtroom drama for the ages. Ultimately, science and enlightenment prevail- religious dogmatism is put back on its heels.

These days, in The Don’s America, the attack on science and enlightenment has returned (Climate change is a hoax!); it is a core part of The Don’s strategy to sustain his political base. It is a cynical movement motivated by greed, requiring regressive thinking and inspiring blind allegiance to a new theocratic order. In this world, truth and facts are not fixed things but are manipulated by a false theology called Donism.

As many have said: When facts and truth don’t matter, we are in some serious deep shit! Democracy tilts on shaky ground and autocracy ascends- the institutions we rely on for guidance are threatened and instability and chaos become part of the norm.

Not being a bible-quoting type of guy, the below passage, from which “Inherit the Wind,” draws its inspiration, gives me hope:

Proverbs chapter 11, verse 9: He that troubles his own house shall inherit the wind: and the fool shall be servant to the wise of heart.

Simply put: One who causes trouble or unrest in his home, his town, or even his country, invites trouble and chaos.

The bible turns out to be prophetic. The Don’s chaos making, disregard for the law and lack of human decency has led him to be impeached! His desire to sow chaos and tear apart his country has led to a reckoning.

That has not stopped his flock from defending him against the clarity of truth brought before the House of Representatives. The fervor of the devotees of Donism, despite the facts presented, has no bounds. In a statement that could have come right out of “Inherent the Wind,” Republican, Representative Barry Loudermilk of Georgia, compared Mr. Trump  with Jesus Christ, saying that the son of God had been “afforded more rights by Pontius Pilate than Democrats had given the president.” 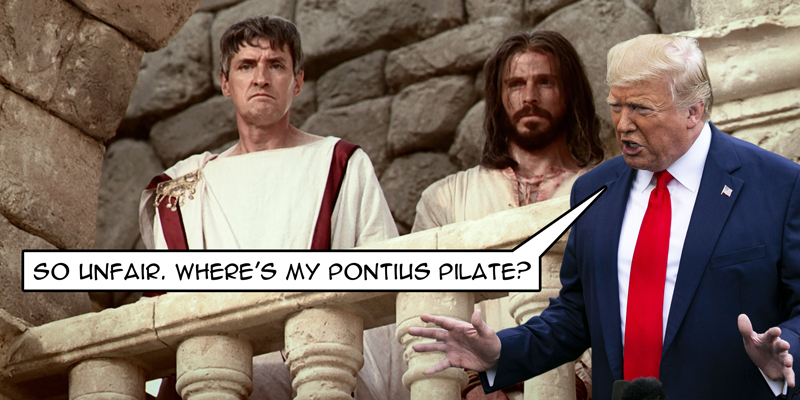 Now that’s one hell of a windbag. Jesus would barf knowing The Don was being compared to him.

And that brings us to wind and the greatest windbag of them all.

During a two hour rambling rant at a rally, that took place in real time, while Nancy Pelosi adopted the articles of impeachment against him, The Don waxed poetically about one of his pet peeves: wind. It is in this rant that we hear everything we need to know about how The Don promotes Donism.

“I never understood wind,” “I know windmills very much, I have studied it better than anybody. I know it is very expensive. They are made in China and Germany mostly, very few made here, almost none, but they are manufactured, tremendous—if you are into this—tremendous fumes and gases are spewing into the atmosphere. You know we have a world, right?”“The world is tiny compared to the universe,” he continued.

“You want to see a bird graveyard, go under a windmill someday. You will see more dead birds than you’ve ever seen in your life.”

So let’s deconstruct the windbags rambling about windmills and his model for Donism.

“I never understood wind,” “I know windmills very much, I have studied it better than anybody.”

Here is The Don speaking utter nonsense-the ultimate windbag. I know, I don’t know and I know more than anyone. This is the trust me, I know more than the generals trope. It doesn’t matter t\he doesn’t know anything; it’s just important to believe in him and you’ll take it from there, as he alone can fix it.

“Tremendous fumes and gases are spewing into the atmosphere. You know we have a world, right?” And that “The world is tiny compared to the universe,”

Just for the record, compared to fossil fuels, wind energy has the lowest carbon footprint of any energy source.

The Don uses lying and exaggeration as part of  his windbag arsenal with such brazen certainty that people believe him . If he says something with enough conviction  people take it as gospel, because they are too lazy and ignorant to pursue the facts.

Second, did you know we have a world and that the world is tiny in the scheme of things? Here we have: I am going to say something so idiotic, something every 8 year old knows, but say it in a way that makes it seems that I am the first person to ever discover it. 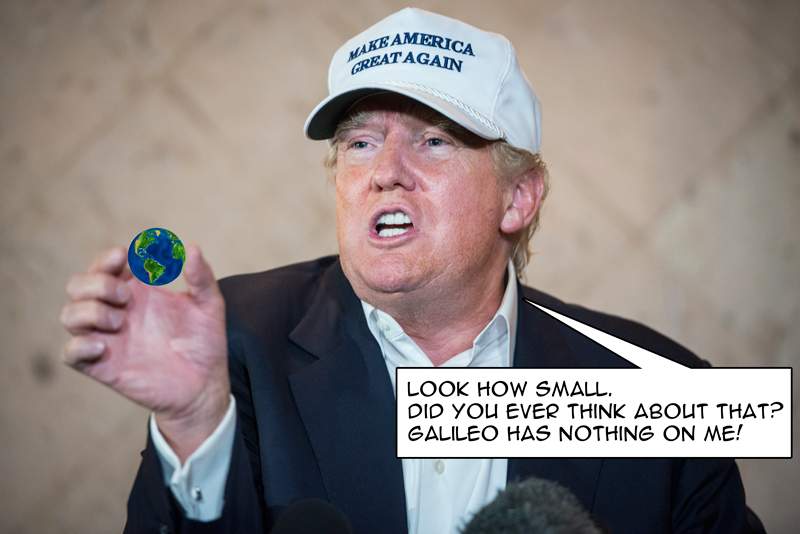 So here we have it: The essence of Donism. Claim to know more than anyone, so you should trust him to lead the way, lie and exaggerate with passion and conviction to people who need something to believe in and claim ownership of ultimate truths, so people believe you are special and attaching yourself to him makes you special as well.

So what will America do? Will Donism continue to rule the day? Will the Senate impeachment trial be a genuine attempt to follow the truth wherever it leads? Or will it be held hostage by our immoral enabling Republican Senators? Will we brought further back in to the primitive world of Nativism and Creationism or will facts win the day. Let’s hope that like in the film, “Inherit the Wind,” that science and truth prevail and the great windbag and his cronies have to suck wind from being chased out of town.