So Robert Mueller finally testified in a public hearing. Many were disappointed that there was no revelation, no “John Dean” moment, that would create a clear path to impeachment. Yes, Mueller was bumbling at times; yes, he struggled to hear things; yes, he looked anxious; he did not carry himself the way we imagined a decorated recipient of the Purple Heart would. He often responded to questions with different versions of “nah, not gonna say nothin about that,” frustrating both Democrats and Republicans.

He allowed Republicans to challenge his credibility and didn’t say a word.

He was told by Representative John Ratcliffe, Republican of Texas, that he had “inverted burden of proof” by detailing the president’s conduct without charging him with a crime.

“Respectfully, respectfully, you managed to violate every principle in the tradition,” Mr. Ratcliffe said.

Guy Reschenthaler of Pennsylvania accused the process of Mueller’s investigation as being “un-American.” Rich coming from a guy genuflecting to a president who is having a bromance with Putin, a man who is trying to destroy our democracy.

Representative Louie Gohmert, was his usual foaming-at-the-mouth self, while accusing Mueller of “perpetuating injustice.”

Then there was our favorite Don mule, defender and sycophant Devon Nunes waxing poetically:

“Welcome everyone to the last gasp of the Russia collusion conspiracy theory… The American people may recall the media first began spreading this conspiracy theory in the spring of 2016 when Fusion GPS, funded by the DNC and the Hillary Clinton campaign, started developing the Steele Dossier… There is collusion in plain sight: Collusion between Russia and the Democratic Party.”

Talk about turning things on their head: The Democrats as the colluders. This is now the world we live in. This is like someone going in to a store, stealing something and when they are apprehended, saying it wasn’t them who stole it; it was the guy behind the counter. And even if he did steal, it would have never happened if the owner hadn’t purchased the item in the first place.

During this game of charades, where clowns are posing as lawmakers, dissembled, scolded and ridiculed, Meuller was tight lipped and just absorbed it all. I kept hoping, that at some point, he would have a “Network” moment.

Mueller gathers himself, gets up from his chair, takes stock of the room, looks right in to the cameras and says:

I am not going to take this shit from you morally bankrupt people, who have no idea what an American is and have decided for reasons beyond what I can imagine to allow our democracy to be threatened by our greatest foreign adversary. The truth is that the president is a lying, colluding, obstructing, unpatriotic, criminal who represents a grave and present danger to our democracy. And yes, if he were any other citizen who did what is clearly documented in this report, he would have been indicted. And if this sordid affair teaches us anything, it is that the Office of Legal Counsel memo, stating you can not indict a sitting president, should be abolished immediately!

But wait, he kind of did say most of that!

Asked if The Don “wasn’t always being truthful” or complete in his written answers under oath to the special counsel’s questions, Mr. Mueller responded, “I would say generally.”

During questioning by Adam B. Schiff, Democrat of California and the Intelligence Committee Chairman, Mr. Mueller agreed that receiving campaign assistance from a foreign power was “unpatriotic” and “wrong.” Take that Mr. president, Bob Mueller actually said out loud that you were “unpatriotic!”

Jerold Nadler, Chair of the Judiciary Committee asked Mueller: “The president has repeatedly claimed that your report found there was no obstruction and that it completely and totally exonerated him. But that is not what your report said, is it?”

Most chilling was Mueller’s comment that campaign’s openness to accepting Russian assistance would prove to be “a new normal.” And he warned that not only had the Russians not been deterred from election interference but “they’re doing it as we sit here.”

Think of that. While you were running to the bathroom or refilling your bowl with popcorn, Russia was working to undermine democracy by influencing and infiltrating our election. In fact, the day after Mueller testified, the Senate Intelligence Committee, led by republican Richard Burr, released their report finding that the Russians had infiltrated our elections in all 50 states!

So what does low life Mitch McConnell do to address the urgency of this matter. He refuses to let a number of proposals, that would protect our elections, even come to the floor for a vote! (By the way, while we are getting rid the OLC, let’s get rid of this ridiculous rule that the Senate Majority Leader can single-handedly prevent any bill from coming to the floor!)

Joe Scarborough, of MSNBC, once a Republican Congressman, tweeted this regarding McConnell’s action.

Coincidentally, Rusal, the aluminum company partially owned by Russian oligarch Oleg Deripaska, announced plans to invest around $200 million to build a new aluminum plant in Kentucky; it will be the biggest new aluminum plant constructed in the U.S. in decades. Rusal will have a 40 percent stake in the facility. Interestingly, this is happening just months after the Trump administration removed it from the U.S. sanctions list. McConnell was among the advocates for lifting sanctions on Rusal.

Call me a conspiracy theorist but Moscow Mitch has got an itch for Putin as well.

What else could McConnell be hoping for from the Russians?

What about the promise of a new Russian plastic surgery technique that will remove his baggy jowls?

So of course the Republican members of the Intelligence Committee, who listened to Mueller say “they are doing it as we sit here,” and have now added that they are doing it in every state, are outraged and as patriots are all knocking down McConnell’s door to force him to bring the bills to the Senate floor to protect our elections. Right? Umm, not so fast!

So I ask, where is Little Marco, and Mittens (Romney) and the wilted Graham Cracker (Lindsey)? Don’t hear you, do we? And until we do (which we won’t) we can call you Moscow Mule Marco, Moscow Mule Mitt and Moscow Loving Lindsey. To Russia with love! Thanks for your service to our country! 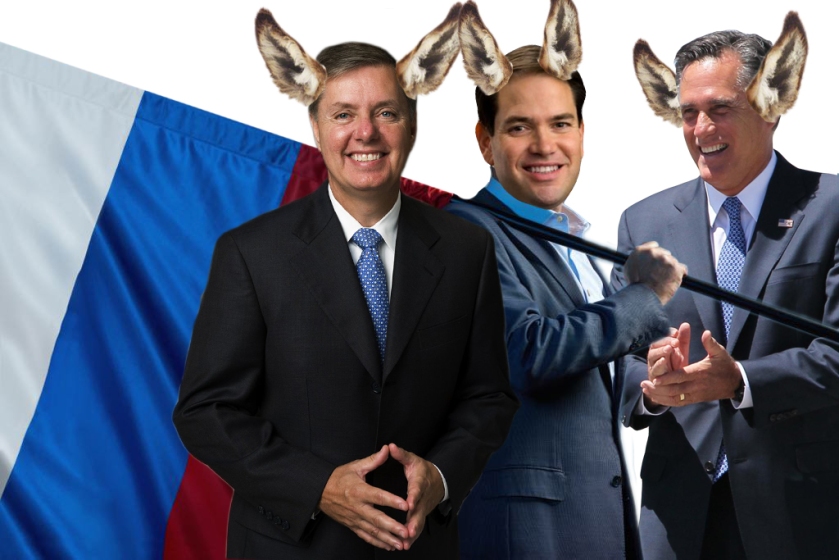