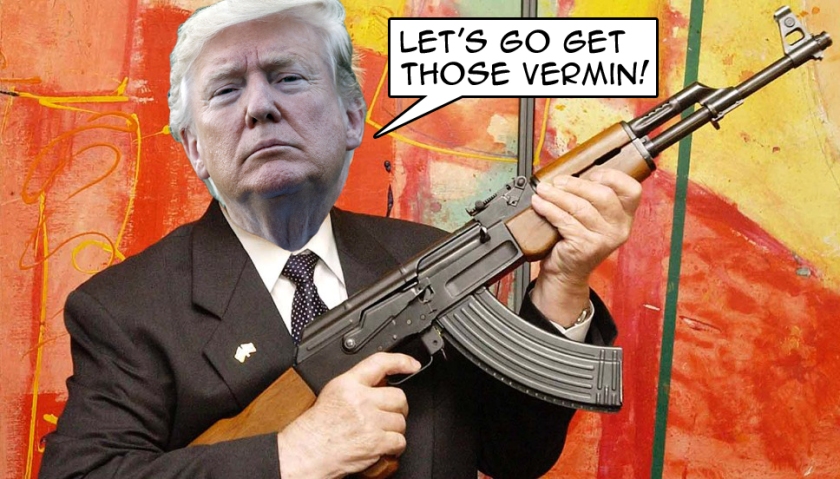 Of all the thousands of The Don’s egregious lies, his sickening fabrications about his involvement in the tragedy of 9/11 are some of the most heinous. Everything you need to know about how disturbed he is can be gleaned from this.

Three hundred forty-three firefighters and paramedics were among the thousands of people who died in the fires and in the collapse of the two buildings.

Tens of thousands of first responders have suffered serious medical and psychological problems as a result of the catastrophe.

Dr. Michael Crane, who directs The World Trade Center Health Program, says 72,000 people are enrolled, including firefighters and police officers but also utility workers, medical examiners and others. Of them, he says, 8,000 already have cancer. And how many are still suffering with PTSD as a result of what happened?

Finally, after years of battle, the Senate signed a bill to permanently fund the 9/11 Victim Fund. (Thank you Jon Stewart, whose tireless work and shaming of Congress finally achieved something that should have happened a long time ago.

Standing on the White House lawn, after signing the bill, The Don took the opportunity to once again make everything about him.

In outrage and parody, the Twittersphere went bonkers with memes about The Don’s famous moments in history:

Who can forget those famous words uttered by Donald Trump when he stepped onto the surface of the moon?

“That’s one small step for me, one giant leap for me.”
#LostTrumpHistory pic.twitter.com/iA5AIZfOf1

Verily, Trump was there, as Jesus spoke to the masses. #LostTrumpHistory pic.twitter.com/tI4Jig7DWf

Here is some more Don-history regarding 9/11:

On the day of the attack, Mr. Trump called into WWOR-TV to say that he had a window in Trump Tower that looked directly over the World Trade Center. Guess he wanted New Yorkers to know that he was watching the event. “Hey guys, it’s Donald, just want you and all of New York, who are tuned in to your amazing show, that I am watching the buildings burn.”

The anchors, thrilled to have The Don on the air, praised his real estate prowess in a wide-ranging interview. The Don took great pleasure in this. How perverse does it get?

He actually said (while he was watching the disaster unfold) that his building “40 Wall Street actually was the second-tallest building in downtown Manhattan and it was actually, before the World Trade Center, was the tallest — and then, when they built the World Trade Center, it became known as the second tallest. “And now it’s the tallest.” (It wasn’t.) His penis rising while the world around him tumbles. Isn’t that the kind of guy you want as president?

Initially, he claimed he had hundreds of friends who died. He had none. How sick is it to insert false pain in to such tragedy? Frankly, if he did have a friend who died, it would have meant nothing to him, as he has absolutely no capacity for empathy.

He also said: “I have a window in my apartment that specifically was aimed at the World Trade Center, because of the beauty of the whole downtown Manhattan. And I watched as people jumped, and I watched the second plane come in…Many people jumped, and I witnessed that. I watched that.” His apartment is 4 miles from the Trade Towers, which makes it impossible to see people jumping from the buildings. But wait, maybe he was using the famed Hubble telescope.

So what is it?

A profoundly disturbed individual, who is the most powerful person in the world, who trivializes other’s pain, and aggrandizes himself without a care about the impact of his words or actions.

A man who will say anything to get what he wants, and get others to focus on him.

What it is, is a man, who, from the moment he started his campaign, has maligned Muslims, people of color, and immigrants coming in from our southern border.

What it is, is a shameful and dangerous strategy to rile up white people against “the other.”

And while The Don spews and inspires hate in his base, the consequences of his actions are grave.

In some ways, The Don is no different than the leaders who inspired the World Trade Center attack on 9/11. Bin Laden, turned his hatred toward America and the West; The Don focuses his hatred on people of color in his own country. 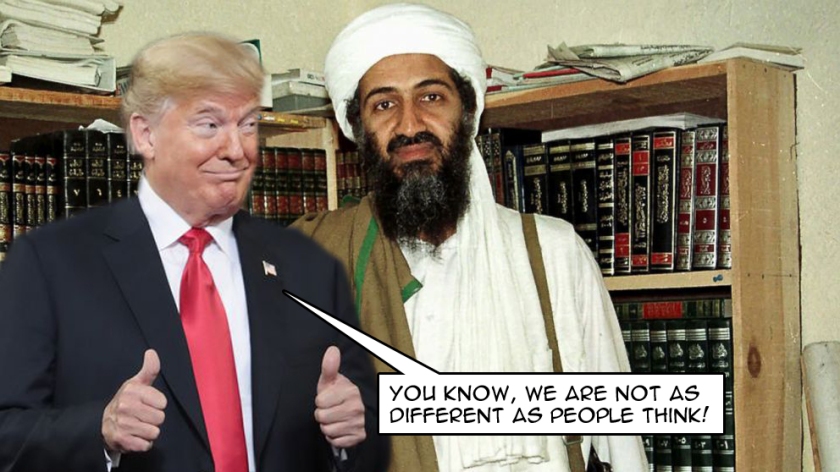 His rhetoric inspires and cultivates our own home grown terrorism.

He has welcomed to the White House, and thus given his blessing to, a corps of hard-liners, demonizers and conspiracy theorists shunned by past presidents of both parties.

In March, Mr. Trump. “They don’t like it when I say it — but we are being invaded,” he said of his critics. “We’re being invaded by drugs, by people, by criminals. And we have to stop it.”

Here is The Don at a rally before the mid-term elections:

Here’s what the El Paso gunmen wrote in his manifesto:

“This attack is a response to the Hispanic invasion of Texas.”

Here’s Frank Figliuzzi from a July 31st Op Ed in the NY Times:

Our experience with online radicalization has shown there is a clear path to violence. I fear we are on it.

This week alone there have been three mass shootings, in California, Texas and Ohio. The California and Texas shooters both espoused White Supremacy

So let’s call it what it is: Domestic terrorism!

Both were inspired by The Don’s hate-filled anti-immigrant rhetoric. In his mind, this is a winning political strategy. In my mind, though he may be less intentional than Bin Laden, he is as responsible.

The blood of those murdered is on his hands. But he feels nothing; the love he gets from his followers is all he is concerned with. If he truly cared about any of this he would stop his rhetoric and make it clear to people that this violence must stop! If I hear one more Republican blame video games and mental health issues for this…

Let’s face it folks, we have a domestic terrorist as the President of the United States.