Mitch McConnell, the brave protector of women, who was willing to create a health care bill that denied millions of women basic pre-natal care and voted against the Lily Ledbetter Fair Pay Act that supported equal pay for women, finally came out and changed his “if” to a yes.

For days he had dangled on the edge, holding on to Republican supporters of Roy Moore-choosing party over decency- by saying “if” the allegations of sexual misconduct against Moore were true, he should get out of the Senate race. This “if” to “yes transformation came after a 5th woman accused Moore of sexually inappropriate behavior toward her when she was 16. (Since then, four more women have come forward against Moore.)

In an emotionally wrenching account at a press conference, she revealed a disturbing story about being trapped in a car with Moore, fearing he would  rape her. Moore vociferously denied this new accusation stating that he had never met this woman and never been to the restaurant she waitressed at. Problem with that denial is that he included the name of the restaurant in his inscription in her yearbook. Perhaps there is a Moore body double involved. Now that’s scary!

We have also found out that Moore was known as the “Menace of the Gadsen Mall,” where he was banned because of his unsavory reputation for sexually harassing  teenage girls.  Rumor has it, that before this banishment, he was banned from the “Build a Bear” counter for his eery and lecherous interactions with the Teddys. 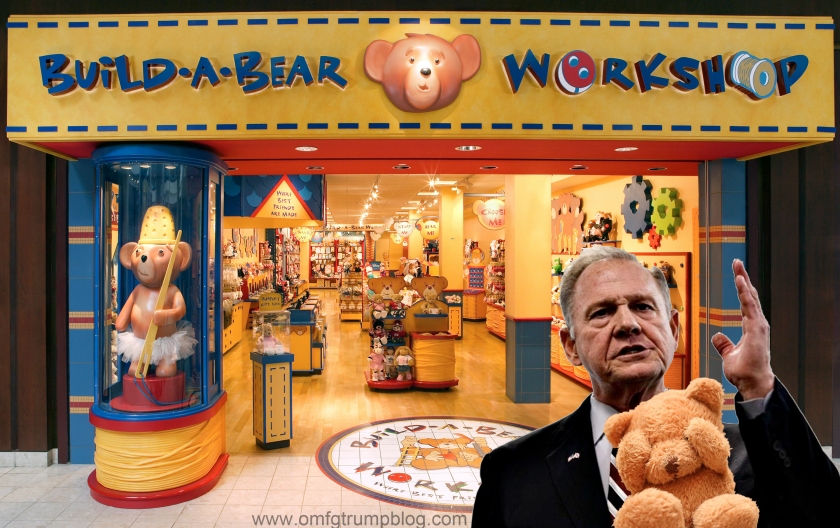 He also was banned from the YMCA for harassing teenage girls.

And though some other Republicans lawmakers have come out against Moore, urging him to step down from running, many haven’t.  Only a few days ago did the National RNC  withdraw their support. That leaves the Republican Party of Alabama going strong in its attempt to get Moore elected. Better to elect a sexual predator than a Democrat, as the devil you know, is better then the devil that is a Democrat.

If my memory serves me right, Republicans and some Independents already proved they could choose a sexual predator when they voted for The Don. So all bets are off  in this election. What makes this case particular heinous is that the acts were perpetrated against girls as young as 14.

Moore has railed against the press and plans on suing The Washington Post, despite having 30 sources corroborating their story. It is all fake news and politically motivated by evil democrats. The aggrieved Moore has used this attack on his morality as a fund raising tool. “I will bring God to the Senate” and “Alabama embraces all 14 year olds with love,” are notable tag lines for their the fund raising letters.

If Moore stays in the race and wins McConnell will have to greet him. How would that go?

“Moore joins this sacred body with an outstanding resume. His pedophilia, oops, I mean pedigree, is something to behold.”

“Now people let’s get back to tax reform as our donors are waiting and if we don’t get this thing passed we won’t get another nickel from those guys and then are re-election efforts are screwed.”

“I’ve been asked if the senate is going to take any action to ensure that Moore doesn’t serve time in this sacred body and my answer is two fold:

Ask Steve Bannon and we’ve got a tax bill to pass.”

“After all, our president, who we all voted for, is a known (and unabashed) sexual predator.  53% of the white women of our great country voted for him. Clear that they don’t mind pussy grabbers being president. Ha!” Nor his inappropriate violations of sexual boundaries with Ms. Teen America contestants in 2013 in Moscow.”

This is what The Don had to say about that experience:

Well, I’ll tell you the funniest is that I’ll go backstage before a show, and everyone’s getting dressed and ready and everything else, and you know, no men are anywhere. And I’m allowed to go in because I’m the owner of the pageant and therefore I’m inspecting it. You know, I’m inspecting, I want to make sure that everything is good.

You know, the dresses. ‘Is everyone okay?’ You know, they’re standing there with no clothes. ‘Is everybody okay?’ And you see these incredible looking women, and so, I sort of get away with things like that. But no, I’ve been very good.

My two favorite words of the above are funniest and very good. Though the fact that he didn’t say very, very, very, good gives cause for pause.

According to Alabmans, Roy Moore is a good man, too. He’s a poet and recites some funny stuff. The title of one of his side splitter is:

Republican lawmakers have stood behind him  (Are Republicans even allowed to stand behind one another?) and have said:

“Other than being with an underage person-he didn’t really force himself.”

“The same thing went on when Trump ran for office: there was about 15 ladies who ran to the press and said the same thing.”

“There’s just nothing immoral and illegal here. Maybe just a little bit unusual,” said the Alabama State Auditor (whose name I can’t write write as I can’t type when my hands are poised to strangle someone.)

“Take Joseph and Mary. Mary was a teenager and Joseph was an adult carpenter. They became parents of Jesus.” “There’s just nothing immoral or illegal here. Maybe just a little bit unusual.”

Unusual is definitely one way of describing it. That’s a pretty controversial statement, Mr. No-Name. Come to think of it, rather heretical. To defend Moore, you actually challenged the orthodoxy of the Immaculate Conception. Mike Pennance for you. On the positive side, here is an Evangelical giving a shout out for science, at least with the birth thing.

And Moore has been the voice of moral authority, fire and brimstone Christianity.

He is was just tickled when the president referred to the communion as “my little wine and my little cracker?” And it was so funny when he referred to Second Corinthians as “Two Corinthians. The joke goes: Two Corinthians go in to a bar and leave disappointed because there were no under age women there.

Notice that The Don hasn’t weighed in yet. He was too busy hugging Putin and Duterte, being duped by China and plugging his golf course during his speech about North Korea. Though he did manage to tweet that Ed Gillespie was a loser. Perhaps the topic is a little too close to home?

So what will McConnell do if Moore remains in the race and wins?  McConnell was head of the ethics committee during the 33 month investigation in to Senator Bob Packwood’s sexual misconduct with more than 20 female staffers back in the 1990’s. They produced over 10,000 pages of documents detailing Packwood’s transgressions. Rather than facing expulsion, Packwood resigned. During the inquiry, at one point Packwood defended himself by saying “it was his Christian duty to have sex with her.” Jesus!

More than anyone, McConnell knows what to do. He could start an investigation right now proving how serious he and his fellow Republicans are about having a sexual predator and pedophile among their ranks. But then again there is a tax bill to pass. And Mr. McConnell, if you have the guts and moral rectitude to do your duty to make sure Moore doesn’t serve in the sacred body of the U.S. Senate, then maybe your next target will be The Don, our Predator-in-Chief.