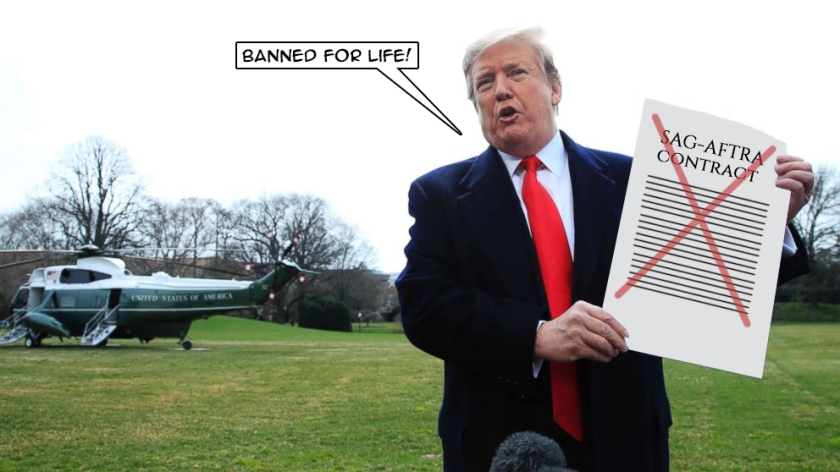 With his impeachment trial beginning and the possibility of conviction a near impossibility, we turn to the Screen Actors Guild-American Federation of Television and Radio Artists, Sag-AFTRA, for inspiration and a moral compass.

The union voted “overwhelmingly” to find probable cause that Trump had violated SAG-AFTRA’s constitution in inciting the January 6 attack on the U.S. Capitol and “sustaining a reckless campaign of misinformation aimed at discrediting and ultimately threatening the safety of journalists, many of whom are SAG-AFTRA members.”

On the other hand, the Republican party, who gave a standing ovation to Q lady, Marjorie Taylor Greene, has already decided that inciting an attack on the U.S. Capitol and to quote Sag-AFTRA, “sustaining a reckless campaign of misinformation aimed at discrediting and ultimately threatening the safety of journalists” as well as the Capitol police, members of Congress and the vice president, does not rise to the level of a conviction and being barred from running for public office again.

In fact, with such overwhelming evidence against him, The Don’s lawyers won’t even try to argue the facts: their defense will be to claim the proceeding itself is constitutionally illegitimate. A defense ready made by the 45 Republican senators who voted to derail the trial before it started.

It will come down to what I call the Sargent Schultz (of Hogan’s Heroes fame) defense: “I see nothing, I know nothing” and for good measure, I am not even here. In other words, regardless of what you witnessed, it doesn’t matter, because there is no basis for a trial. Since the trial shouldn’t exist, you can’t vote to convict because that would be an acknowledgement of the fact that there was a right to have a trial. Feels a bit Kafkaesque.

Once again, we are confronted with the stark reality that the Republican party is willing to risk the very democracy it is charged to defend and abandon all its principles, to pledge its allegiance to The Don.

The Don, true to form, seeing the handwriting on the wall, beat them to the chase. Resigning before they call to say: “You’re fired,”

Below is his resignation later. I reprinted it in full because it such classic Don.

I write to you today regarding the so-called Disciplinary Committee hearing aimed at revoking my union membership. Who cares! While I’m not familiar with your work, I’m very proud of my work on movies such as Home Alone 2, Zoolander and Wall Street: Money Never Sleeps; and television shows including The Fresh Prince of Bel-Air, Saturday Night Live, and of course, one of the most successful shows in television history, The Apprentice – to name just a few!

I’ve also greatly helped the cable news television business (said to be a dying platform with not much time left until I got involved in politics) and created thousands of jobs at networks such as MSDNC and Fake News CNN, among many others.

Which brings me to your blatant attempt at free media attention to distract from your dismal record as a union. Your organization has done little for its members, and nothing for me – besides collecting dues and promoting dangerous un-American policies and ideas – as evident by your massive unemployment rates and lawsuits from celebrated actors,

Who even recorded a video asking, “Why isn’t the union fighting for me?”

These, however, are policy failures. Your disciplinary failures are even more egregious. I no longer wish to be associated with your union.

As such, this letter is to inform you of my immediate resignation from SAG-AFTRA. You have done nothing for me.

SAG-AFTRA’s response was a simple “Thank you.”

I appreciate the elegance, the high mindedness and the desire not to engage and breath oxygen into the situation.

But here would be my response.

First let’s set the record straight on a few things. What you did in those movies is not called work: It is called a cameo. And even though you are no longer a member, we feel it is our patriotic duty to due justice to your presidency. At present, there are numerous projects being explored. Too bad we won’t be able to consult you or even cast you, but we promise that we will create compelling, dramatic and riveting entertainment. Exactly what you would want.

Here are a just a few that are being considered by two new production companies: Orange Rot Productions and Golden Showers Productions.

Vlad and Me: A buddy picture for the ages. The plot revolves around a president of the U.S. sharing secret information for love. For any old movie fans, there is one scene of Vlad and a certain orange haired president that equals the steaminess of Burt Lancaster and Deborah Kerr on the beach in “From Here to Eternity.” Purportedly, its climax has a golden shower.

The Insurrectionist: a deep dive into the coordinated attempt between White Supremacy Groups and people in government to overturn an election. The opening scene is one of the scariest things ever produced. Take a seat Chucky. The scene opens with a mob storming the Capitol. The camera zooms in on crazed man taking a fire hydrant and smashing it over a police officer’s head. The camera then zooms in on an orange haired man in the oval office watching TV yelling: “Did you see that shit? That’s better than any WWF thing I’ve ever seen. Do these people love me or what?” The phone is ringing. Aides are trying to get the president’s attention to no avail. “Tell them I’m not in. Look at this shit, isn’t it just amazing.”

From Riches To Rags: This film follows the ruinous descent of a president of the United States as he loses all his friends, money, the debtors who want their due and ultimately is imprisoned. Rumor has it that some of the jail scenes at the end are quite chilling.

Let’s hope that with the current president doing the work of the president and not just making cameos, we will emerge from this nightmare and once again be able to say: “How about we go to a movie?”

Disciplinary Board of SAG-AFTRA