Let’s start off with a little fun. Let’s play “What’s Your Favorite Quote.” This week there were some doozies.

According to traitor John Bolton, The Don told Chinese President Xi that he “should go ahead with building the (internment) camps, which was exactly the right thing to do.*”

Rumor has it that The Don asked Xi for his blessing to put asylum seekers in camps and separate children from their families. Xi responded: “Great minds think alike.”

Bolton also quoted The Don asking Xi for help to get reelected. “Make sure I win,” he asked.  Isn’t that an impeachable offense? Remind you of something else? Maybe Ukraine?

Regarding his race-baiting decision to hold a rally on Juneteenth in Tulsa (which was changed because of blow-back), The Don said: “I did something good. … I made Juneteenth very famous. Nobody had ever heard of it.”  Spoken like a true narcissist!

During his rallying in Tulsa, after claiming that he prevented 100’s of thousands of deaths from Covid-19, he lamented the fact that cases were on the rise and said “When you do testing to that extent, you will find more cases. So I said to my people, ‘Slow the testing down, please.’”.

Rumor has it that he later said: “How are ever going to convince people the virus is going away if we keep testing people. Fire those people!”

Despite outcry from scientists and political leaders around the country warning that the rally in Tulsa could be a super spreader event, The Don’s bottomless need for adulation won the day.  Rumor has it when he heard that he was creating a super-spreader event, he smiled and said “I’m someone who is always doing ‘super’ things, that’s why a million people are coming from all over the country to see me.”

With cases in Oklahoma skyrocketing, so was worry. One lawyer appealed to the State Supreme court to block the rally because it was a public health hazard. The Supreme court said, “Meh?”

Bruce Dart, the Director of the Tulsa Health Department was panicked and said: “We’re coming up on a perfect storm of disease transmission and frankly, it’s a perfect storm that Tulsa can’t afford.”

When The Don heard that, he reveled in the description of the rally as perfect. He boasted: “For the record, I just love, love, love storms. Remember what a great job I did in saving Puerto Rico after the hurricane? Remember my perfect form when I threw paper towels at the people?”

When asked if he was concerned that people could die from attending his rally, where there would be little social distancing and little mask wearing, The Don was rumored to say: These people are “warriors” and their love for me is so amazing- that’s what’s important.

The entire scene event had the feel of a spectacle taking place in a Roman coliseum with Caesar orchestrating the festivities, but instead of lions as the enemy, there was an invisible one.

How do you describe an event where the president of the U.S. asks people to come to a rally where the spread of a deadly disease is 100% guaranteed? To me, it is the dystopian confluence of narcissism and nihilism, which merges an insatiable need for attention and adoration with a complete disregard for others and all moral principles because human life is meaningless. Or continuing the Caesar analogy: Hail Caesar and fuck it if you die hailing him!

This event lays bares The Don’s psychopathology in stark relief. Did it make a few Republicans uncomfortable? Oh come on, Mitch, Lindsey, and Marco. Just a little? Your man asks people to die for him so he can get some applauds, renewed chanting of “lock her up,” call Biden “Sleepy Joe,” say testing for Covid-19 is just so boring while thousands continue to die?

The Don did not mention the deaths form Covid-19 once; nor did he mention the tragic recent murders of black men and women by the police. He did spend countless minutes addressing his humiliating stumble down the ramp after his West Point address; he then performed a magic trick showing the crowd how he could drink a glass of water with one hand. (He had recently faltered at an event and had to prop up the glass with the other hand in order to drink.) After watching him do that how could you not want to vote for the guy? 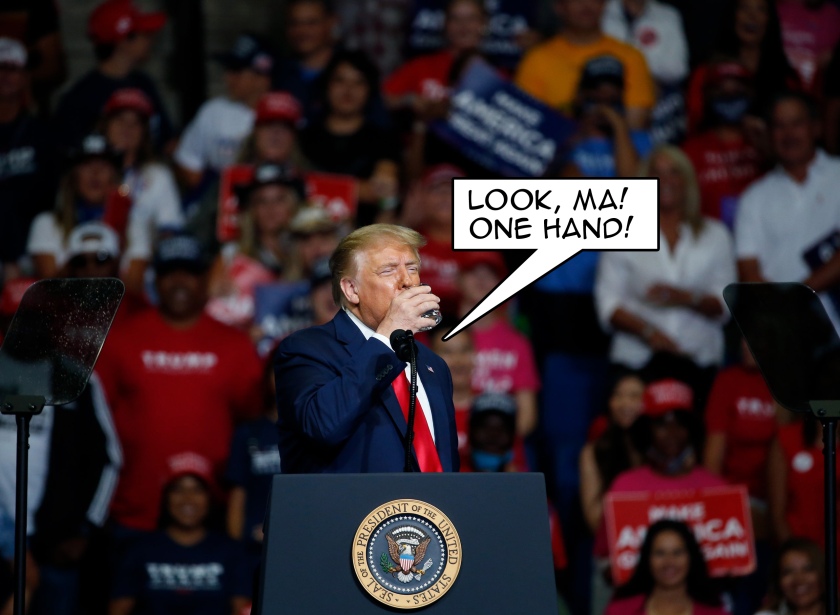 Turns out the rally didn’t go so well. Only 6,200 people showed up to the 19,000 seat arena. Plans for a huge outdoor event from the expected overflow of his fanatic followers were rapidly dashed when there was no one outside. Tantrums ensued. 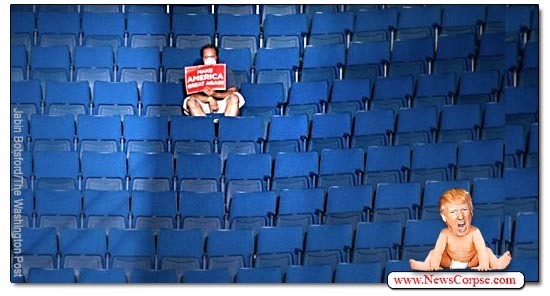 What happened? How did the campaign get it so wrong? How did they miscalculate so badly? The Don’s campaign tried to pawn the disappointing turnout to radical protestors who interfered with attendance.

Turns out Mary Jo Laupp, a 51-year-old from Fort Dodge, Iowa, said she had been watching black TikTok users express their frustration about Mr. Trump hosting his rally Juneteenth.  She vented her own anger in a late-night TikTok video on June 11 — and provided a call to action.

“I recommend all of those of us that want to see this 19,000-seat auditorium barely filled or completely empty go reserve tickets now, and leave him standing there alone on the stage,” Ms. Laupp said in the video.

When she checked her phone the next morning, Ms. Laupp said, the video was starting to go viral. It has more than 700,000 likes, she added, and more than two million views.

I can only imagine the shit-eating-grin on representative Alexandria Ocasio-Cortez when she tweeted “Actually you just got ROCKED by teens on TikTok.”

*As of 2018, it was estimated that the Chinese authorities may have detained hundreds of thousands, perhaps a million, Uyghurs, Kazakhs, Kyrgyz and other ethnic Turkic Muslims, Christians as well as some foreign citizens such as Kazakhstanis, who are being held in these secretive internment camps.)