How desperate do you have to be to accuse a 75 year old Social Worker from Buffalo of being a serious threat to “law and order?

The Don did just that when he accused Martin Gugino of faking his injuries after being pushed to the ground by police during a peaceful protest, even though he had been in the hospital for multiple days because of his injury.

Buffalo protester shoved by Police could be an ANTIFA provocateur. 75 year old Martin Gugino was pushed away after appearing to scan police communications in order to black out the equipment. @OANN I watched, he fell harder than was pushed. Was aiming scanner. Could be a set up?

And what about the fact that he was in the hospital Don? Umm. Oh I know: “The doctors treating him and the administration in the hospital are co-conspirators-could be ANTIFA as well! Think I’ll go up to Buffalo and kick him with my bone spur!

The Don received some serious blow-back for his continued peddling of conspiracy theories. Rumor has it that when he heard that Gugino was a Social Worker, he doubled down on his comment saying: “Social Workers are dangerous people. People out there want to replace police with them. How dangerous is that? Why would anyone ever want to be a Social Worker? All you do is spend your time helping people. Why would you do that? What a waste of time.”

Surprisingly (not), despite Mitt Romney, Republican lawmakers decided to skirt the issue. When asked about the Don’s tweet they just slinked away, turning their heads to avoid eye contact, like someone in a commercial for halitosis.

At least they could have made up some good reasons for why they couldn’t hang around to comment on the tweet.

Tom Grassley: Listen, I would love to talk to you about this, but I just took a suppository and I feel a giant bowel movement coming on and I haven’t had one for a week.

Lindsey Graham: I have a booty call with one of the cutest boys I have ever hired.

Didn’t you love Marco Rubio’s comment that he didn’t read tweets and that he just wrote them. Oh come on Little Marco, you know you are always checking twitter to see how many people commented on your tweets and how many followers you have. Be honest, tell us that you had to run because you were meeting with people organizing your 2024 presidential campaign.

And what about our bestie Mitch McConnell. Instead of obfuscating, you could had just said that you were scheduled for jowl surgery and had to run; or even better, you were meeting with a religious leader to see if your immoral behavior had reached the depths where absolution was no longer on the table and that going to hell was a done deal.

President Bone Spurs, how desperate for gravitas do you have to be to require West Point graduates, who have been sent home because of Covid-19, to return to campus, so you can give a graduation speech? You really required all those hard working cadets to quarantine for 14 days so they could bow to you and listen to your babble? After your rebuke by top level military, you have turned the military against you and that is one helluva accomplishment.

In a rare moment for high ranking military officials, Army Gen. Mark Milley, the chairman of the Joint Chiefs of Staff, issued an extraordinary apology for his participation in that awful presidential photo op made possible by the use of tear gas against peaceful protesters.

Wonder what those graduates were saying during their presidential quarantine?

Cadet 1: “This bozo is a sick puppy. Why couldn’t we have a zoom graduation like everyone else?

Cadet 2: My family has voted Republican all their life, but will never vote for that idiot.

Cadet 3: This guy wouldn’t last a day at West Point. 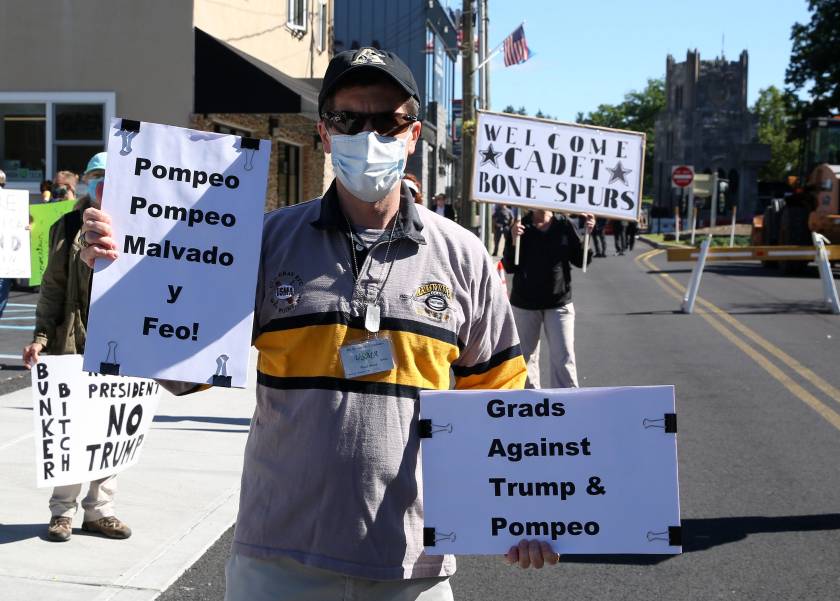 And the battle between King Virus Don and Institutional Racism continues to blow up and blow minds.

As the protest around the world for equity and justice continued, even NASCAR decided to take down its Confederate flag and the military decided it needed to change the names of military bases like Fort Bragg and Fort Lee because they happened to be the names of Confederate leaders.  About fucking time, as, if you recall from your history books, those guys were fighting to keep black people slaves!

But Mr. History decided to double down on keeping the names of the military bases because of their historical significance. Now that’s what I call doing more for black people than any president, doing more to remind them of their history and oppression.

And let’s end with Juneteenth (June 19), the date that marks the day in 1865 when Union soldiers arrived in Texas and read the Emancipation Proclamation announcing that slaves had been freed, the last of the Confederate states to officially receive the news.

Despite spiking Covid-19 numbers in Oklahoma, The Don chose to do his first rally on Juneteenth in Tulsa, of all places, the site of one of the country’s bloodiest outbreaks of racist violence– the consummate double header of race baiting.

Here’s what Mr. “I did more for black people than anyone” had to say about staging the event for this date:

The man who is supporting maintaining Confederate leaders names on military bases is celebrating the liberation of blacks, in a city that had a thriving black community burnt to the ground. Sorry Mr. History, this is not a celebration but a desecration.

Correction: In a moment of sensitivity (not), The Don decided to change the date of his rally to June 20th. At the same time, he asked all those wishing to attend his Covid-19 dance party, to sign a document indemnifying him from any responsibility should they get sick form the virus. The theme for the rally is: You love me so much you will even die for me!