With the horrendous murder of George Floyd taking center stage in our country, this piece should probably be entitled “The Tale of Two Viruses and One Cancer”. But, first to the viruses.

To witness The Don this week is to beg the question: Is there still a pandemic going on? Has the great America tamed the virus? What’s all the fuss over 100,000 people dying? People die every day. Anyway, most of them are from nursing homes; you know, just a weigh station before the good Lord takes you away anyway. So what’s the fuss all about?

The delusional man with the little hands and devil’s heart is telling us they have little value, little value.

Many lost are black and brown people and because they are already a sickly bunch it’s actually their fault.

The delusional man with the little hands and the devil’s heart is telling us they have little value, little value.

America needs its meat, so sorry plant workers, we give so little shit about you that OSHA hasn’t bothered to set up federal safety guidelines for you.

The delusional man with the little hands and the devil’s heart is telling us they have little value, little value.

The delusional man with the little hands and the devil’s heart had to be convinced to fly the flag at the White House half- mast to honor the dead. Maybe for him, half-mast is wimpy, like a flaccid penis. Doesn’t project strength, like wearing a mask.

And guess what The Don was doing as we approached 100,000 dead? You guessed it: playing golf. Mr. Mulligan was tired of being cooped up and wanted to set an example to the country’s premature reopening by taking to the links. As he bragged about hitting his One Iron as far as Tiger Woods, moved his ball to better positions (called cheating!), took do overs of shots he didn’t like (mulligans) and then took whatever score he earned on a hole and lowered it by two (cheating again),ultimately declaring how extraordinary he was (bloviating grandiosity), the country was in mourning.

The Don was peeved that all this talk about mourning was going on as it was harshing his mellow, creating an unwanted hitch in his swing.

He turned to his caddie, and rumor has it, this is the conversation they had:

Caddie: Amazing, but how will you do it, Mr. President?

The Don: Just watch. I will tweet it away. Bam!

Caddie: That’s a real zinger Mr. President. Though from what I read Scarborough wasn’t in Florida at the time of the death.

The Don: So? Anyone who can be so nasty to me could be a murderer. Here’s a great retweet. Boom!

“The only good Democrat is a dead Democrat.” Can you hand me my 9 Iron? Shit. That shot doesn’t count. You know what I mean?

Caddie: “Absolutely, Mr. President. I never even saw you take that shot.

And look at these cool retweets I am making by John Stahl. Remind me to invite him to play golf with me. Pow Pow.

Kamala (Harris) “Willie’s Ho.” (This is a reference to Willie Brown, the powerful California State Assembly speaker who was her mentor and onetime boyfriend.)

And Stahl said this about MSNBC’s fake news host Joy Reid: “When you’re born butt-ugly, changing your hairstyle every day is only going to make you look phonier than your nonsense, pathetic show.”

The Don: (Swings his club) Now that’s the 9 Iron shot I wanted. Remember, I got to the green in one shot.

The Don: Trying to focus on your shot while tweeting is tricky. Makes you more error prone. Putter please.

And look at Sleepy Joe in the black mask. Quite a look. I am going to destroy him in the election.

How about this retweet. Shazam! Isn’t it the coolest thing ever? 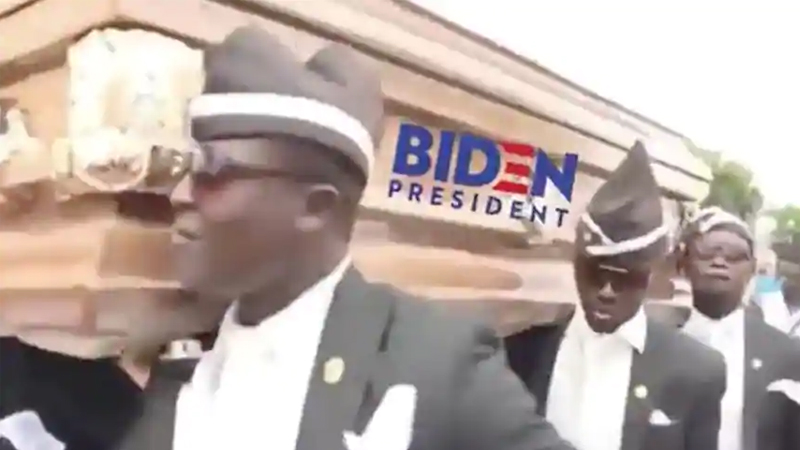 And his demise is going to begin at the in-person Republican convention in August. Can you believe the nerve of the Democratic Governor of North Carolina saying it might not be safe?  The nerve. If he won’t do it other Republican governors will. And to show America how amazing we are no one who comes to the convention can wear a mask!

Shit. The wind messed up that putt.

The Don: Shit, the wind messed up my putt again.

The Don: Now that I think of it the ball really should be much closer to the hole because the original shot was held up by the wind.

Shit. Let me move closer. Kerplunk. (The sound of ball in cup.) So satisfying a sound. Amazing how I one putted this from the edge of the green; I challenge any pro to do that.

And can you believe what Twitter did to my post about mail-in voting? That’s war! Do they know who they are dealing with?

Caddie: That was something. No one should ever start a war with you. But there is one thing. It seems what you are trying to change, you know, the law protecting folks who post on Twitter from being sued for spreading lies about people that might, as they say, come back and kick you in the butt.

The Don: That’s ridiculous. Why would I do something so stupid? What’s my score going in to the 10th hole?

Caddy: Um, let’s see. Do you want the real score or you know, the one you want it to be?

The Don: You know, the same way we deal with the virus.

Now to the cancer.

America’s very being is founded on violence through its genocide of its indigenous people.

America was built on the backs of slaves.

Our constitution refers to black people as three fifths of a person. That is the foundation of the White Supremacy that rules this country.

The majority of the people in prison are black and brown, though they make up a smaller percentage of the population.

Despite some progress in their civil rights, blacks on the whole, suffer from gross economic inequities, are still targets of voter suppression and disenfranchisement and are targets of egregious and unrelenting police brutality.

If you are black, you can be gunned down for going out for a jog.

If you are black, a police offer can enter your home without a warrant and shoot you while you are in your own bed.

If you are black you can be suffocated to death by a knee in your throat by a white police officer in plain sight, all the while yelling that you “can’t breathe.”

For blacks. The “Land of the Free,” is for white people. For blacks it is more the “A People Under Siege.”

Black people are tired (and so am I) of platitudes that promulgate American decency.

Black people are tired of hearing that “America is better than this,” when we see riots in the streets.

The trope of American exceptionalism is taking a beating. The bottom line is that unless we are honest with ourselves and truly acknowledge our original sin of enslaving an entire people and its impact and treat it like we would a stage 4 cancer, America will never be exceptional.

The Don did not create this but he has built his brand sowing division, promoting hate, excusing (and encouraging) White Supremacy and has made comments during his presidency that have stoked the fires for the moment we find ourselves.

The Don’s responses to tragic death of George Floyd and the protests that have ensued is to quote Walter E. Headley, Miami’s former police chief, who in 1967 said, “When the looting starts, the shooting starts,

One of Trump’s most revealing tweets since the rioting began was a boast about the prowess of the Secret Service — and to threaten to sic “the most vicious dogs, and most ominous weapons” on the crowds outside the White House if things intensified.

We need to rid ourselves of this toxic White Supremacist before any healing can begin. We need a leader to bring us together, not further apart. I am not sure America is up to the task but as MLK said: We shall overcome because the arc of the moral universe is long but it bends toward justice.