This week we saw more evidence that the White House was aware in mid January of a potential devastating coronavirus pandemic. And on January 29th, a memo from Peter Navarro, Director of Trade and Manufacturing Policy, and the national Defense Production Act policy.

In the memo, Navaro wrote: “Doing nothing (the “No Containment” option) could range from “zero economic costs” to $5.7 trillion depending on the lethality of the virus.”

He also estimated a scenario in which the coronavirus could kill 543,000 Americans.

Of course, The Don claims he never saw the memo.

Navarro’s Feb 23rd memo begins with, “There is an increasing probability of a full-blown COVID-19 pandemic that could infect as many as 100 million Americans, with a loss of life of as many as 1-2 million souls.”

Navarro called for an “immediate supplemental appropriation of at least $3 billion” to support efforts at prevention, treatment, inoculation and diagnostics. He described expected needs for “Personal Protective Equipment” for health care workers and secondary workers in facilities such as elder care and skilled nursing. He estimated that over a four-to-six-month period, “We can expect to need at least a billion face masks, 200,000 Tyvek suits, and 11,000 ventilator circuits, and 25,000 PAPRs (powered air-purifying respirators).”

Guess what happened to Navarro: He was disappeared from the task force and replaced by, “Mr. President, I think I love you more than Jesus” Mike Pence.

The Don persisted in magical thinking, asseting that this would never happen here, because after all, he is The Don, and not only will he not allow bad things to happen, but the virus is no match for him.

So while the virus was taking hold, The Don was still waxing about how the virus was going to just fade in to the sunset. He saw what happened in China and what was happening in Italy and chose to do nothing!

The Don railed at the World Health Organization trying to blame it for his administrations incompetence. He has railed against governors and the news media; I am waiting for him to say that if Obama hadn’t been president none of this would have happened. Actually, if he had heeded the Obama administrations warnings, not discarded the plan they set up for a pandemic crisis-including setting up a special pandemic task force- our country would have managed this crisis more effectively.

The Don did take time to get rid of Glenn A. Fine, who was the acting inspector general for the Defense Department since before Mr. Trump took office and who was set to become the chairman of a new Pandemic Response Accountability Committee to monitor how the government carries out the $2 trillion Coronavirus relief bill. Is there a chance Don that you will be minding the store, siphoning off money, making your friends richer, while people die? Why else get rid of someone whose job it is to make sure the money is distributed appropriately? Does that sound immoral and disgusting? Yes, and you have proven time and time again, that you are quite capable of doing this!

He also had the government purchase 29 million doses of Chloroquine for treating the virus when there is no evidence that it works. In fact, one study in Brazil had to be terminated, as it caused fatal heart attacks in 11 patients. Sweeden also terminated it study and no longer administering the drug to patients as numerous died of heart attacks as well.

When a reporter asked Dr. Fauci to speak about the drug you told the reporter that the question had been answered many times before and cut off the reporter so Fauci couldn’t speak.  Instead there is reporting that says you have been listening to Rudy Guiliani and Laura Ingraham, of Fox News, who have been feeding you with unscientific anecdotal evidence of the drug’s efficacy. (Hey Rudy, welcome back! Aren’t you in jail yet?)

What do you imagine is on Fauci’s mind when he is being silenced by the master of disinformation and lies? 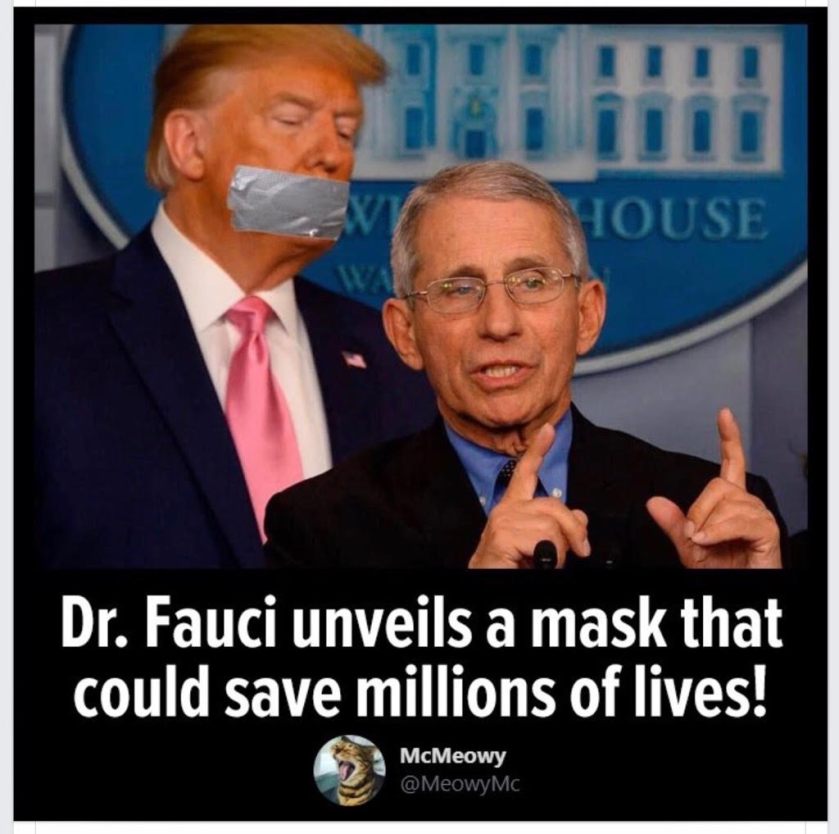 Your patience with Fauci has been running thin; he, as opposed to you, tries to tell the American people the truth. Finally you couldn’t take it anymore and retweeted a former Republican Congressional candidates post: “Time to #Fire Fauci.” Perverse acts of intimidation in your demented reality show “Survivor.”

Hopefully, this schoolyard bullying will have no impact on Fauci’s truth telling as he is interested in saving lives and is truly devastated by what is going on; you, on the other hand, have no empathy and just want to win an election and somehow think getting the economy buzzing back is your pathway, no matter the casualties. If you fire him, maybe he will be liberated and tell the American people how badly you botched this.

We know things are starting to get bad for The Don when you start criticizing the Wall Street Journal. Soon he may even have to go after Lindsey, “I’ll do anything, and I mean anything for you,” Graham. Suddenly, they are starting to say that maybe it isn’t a good idea for you to be spending so much time rambling during the press conference because as far as the public is concerned as the great B.B. King sang: “The Thrill is Gone.”

The Wall Street Journal always “forgets” to mention that the ratings for the White House Press Briefings are “through the roof” (Monday Night Football, Bachelor Finale, according to @nytimes  & is only way for me to escape the Fake News & get my views across. WSJ is Fake News!

The bump in your popularity for handling the crisis is retreating. Your lies, denial of facts and reality, insults of journalists and governors and preening about ratings, are starting to lose their luster, even with some of your supporters. Maybe people dying because of your incompetence breaks the hypnotic spell you have over your base? If death doesn’t then…

The Very Stable Genius faces a true existential dilemma: When is the right time to open up the country again and get people back to work with the prospects of a resurgence of the virus looming?

The Don is right in referring to his decision to reopen the country for business as “the most important decision he has ever made in his life.” Sure is Don, but your attention span to think through things and make decisions based on facts and not your “instincts” leaves me panicked. Luckily, governors are in control of their states and can make independent decisions despite you tweeting that you have the ultimate authority.

Recently you referred to the virus as a genius and in your daily version of “Survivor” you, The Very (Evil) Stable Genius, pitted yourself against an evil genius virus. The consequences of that match up is the unnecessary death toll we are facing. You are so over-matched; your utter incompetence and delusions of grandeur have given the evil genius virus more power to destroy.

If you are serious about making the right decision, then why do you keep repeating that we really don’t need to do a lot of testing? And why do you keep saying we have tested more people than any other country when there are 17 countries that have tested a larger percentage of their population? Why are you not coordinating a national response instead of putting the onus on the states? So when all is told, it will be the states and the governors that failed? That’s your re-election strategy?

Everyone is telling you that massive testing is the way to figure out how to bring the economy back, yet you downplay its importance? There is only one explanation: You are trying to hide the numbers of infected from the American people. You don’t want us to know how bigly and huge they are so you can say “look our numbers are so much lower than expected, see what good job I did!”

Don, the Covid-19 virus is eatingThe Very Stable Evil Genius alive. It feeds off your incompetence, which has allowed it to increase its devastation. But thanks to governors, mayors, front line medical workers, and essential workers, we are fighting the good fight and we can see some progress because of our mitigation tactics of staying home.

Now you are pushing to open the country for business on May 1st, despite scientists imploring that it is too soon. It is clear that you don’t have the smarts and patience to stay the course to save lives. If you open the country too soon, more will die and more blood will be on your hands. And that blood is not the kind that can be washed off with soap. The sad part is that your immorality will prevent you from caring. Let’s hope the American people do and get rid of you the way we are all trying to get rid of the virus.

————————
On a more somber note, the greatest percentage of people dying from the virus are brown and black. This is not surprising, but no less devastating. Poverty, poor health care, higher levels of preexisting conditions, as well as the fact that many are working at jobs that have high exposure rates, explain this gruesome reality. In Chicago, more than 70 percent of the deaths related to the Coronavirus were among black residents, though black residents make up only a third of the city’s population. In Michigan, black residents make up just 14 percent of the population, but over 40 percent of the Covid-19 deaths. This is happening all over the country. What the virus has brought to light is the stark reality of inequity in this country. There is no hiding from statistics. America’s long standing institutionalized racism has been brought to bear in the grimmest of ways. In this game of “Survivor,” it has been clear who the greatest losers are. The question is, when we finally get to the other side of this, will there be the political and spiritual will to do something about it. Will there be institutional change allowing access to healthcare for all. Will there be an emphasis on creating real economic opportunities for people of color to address this shameful inequality?