Last minute newsflash: After the writing of the piece, The Don announced that Easter will be the return to normalcy despite what scientific advisers say. Pence was once again astounded by The Don’s connection to the spiritual world and told him that his brilliance in understanding that America and Jesus will be resurrected on the same day is why the Evangelicals love him so much. To  which Tho Don replied: What does Easter have to do with Jesus? I just want to see all the pretty ladies in their bonnets and if the virus is still around they can use their bonnets for masks.” More on the greatest Easter parade ever in my next piece.}

As the specter of devastation looms over this country, our incompetent president was asked to rate his performance on a scale of 1-10, and saw fit to give himself a 10 out of 10. My only surprise was that he didn’t say, “Too bad you can only give yourself a 10, because it would definitely be an 11, or maybe even 12.”

The most powerful country in the world is being brought to its knees by an invisible microbe. Talk about David and Goliath.

The Don, the most bigly man in the room, but small minded and petty in all ways, has been usurped by one the shortest guys in the room, Anthony Fauci, a.k.a. Tony.

To watch Fauci twist and turn, bite his bottom lip, put his hand to his head when The Don speaks, is to bear witness in real time to the pathology of The Don and the horror show of his presidency. You can see Fauci looking at The Don with imploring eyes as he meanders in to disinformation and false promises thinking: Please, pretty please with a cherry on top. Please, don’t say that. No, no no!

That was the case with his unsubstantiated aggrandizement of the promise of chloroquine, an anti- malaria drug that is also used to treat Lupus and Rheumatoid arthritis.

None of this has any scientific validity and caused a run on the medication which negatively impacts people who need to take the medication to treat their Lupus and arthritis.

So Fauci, the man who has been battle-tested like no other-starting with the AIDS crisis, once again walked to the podium and with a resoluteness that should shame every single Republican lawmaker, gently contradicted the president with something called “facts”.

Can you imagine what The Don feels when that happens? No one tells the president he is wrong! And on national TV to boot!

Don’t you wonder how many times after the press conference The Don has to be talked out of firing him? His staff probably preps him before the briefings: “Mr. President, at some point, Tony may clarify a few things you say, so don’t pay much mind.”

“I don’t see why that’s necessary, as I am a very stable genius and have great instincts for things like science. Like with climate change. My gut definitely tells me it is a hoax. And why can’t I just fire him? I fired Comey and everyone thought that would be the end of my presidency. I booted out traitor Vindman and not a peep from the Secretary of Defense. You know my base would be just fine. They think I am doing a great job (unbelievably, most Republicans support his handling of the crisis) and they probably get bored when Tony is speaking. Got to admit he is pretty boring, such a dweeb. I don’t know how anyone so boring could get to be so important. And he is getting way too much TV time. Let’s do a few of the press conferences without him-bring him down to size.”

I had a dream last night that The Don was locked in a room and the key was thrown way.

The reason The Don tolerates Tony is because he is terrified. He has finally realized that he can’t connive, spin, and lie his way out of people dying. But if you understand his pathological narcissism you also realize that he can’t stop lying, making false promises and blaming others. During national crisis a leader unifies: The Don is incapable of that as he is all about sowing division and conquering. There is no WE for him, just “I”.

He attacks reporters telling them they have asked a nasty question. Most recently NBC’s Peter Alexander asked:

“What do you say to Americans who are scared?”

“I say that you’re a terrible reporter,” Trump answered.

Too bad Alexander didn’t say, “Mr. President, you are a terrible president. Incompetent to the core, lacking any decency and capacity for empathy”.

I can dream, right?

Think about that answer. The President of the United States responding to a question about how he can be a calming influence and reassure people. Basically, his response is: “Fuck you, you fake news asshole. How dare you ask me a question like that? You are just stirring up trouble. Now people are going to start thinking they aren’t safe. You are a traitor to our country! We really need to ban these reporters. Get them the hell out of here.” 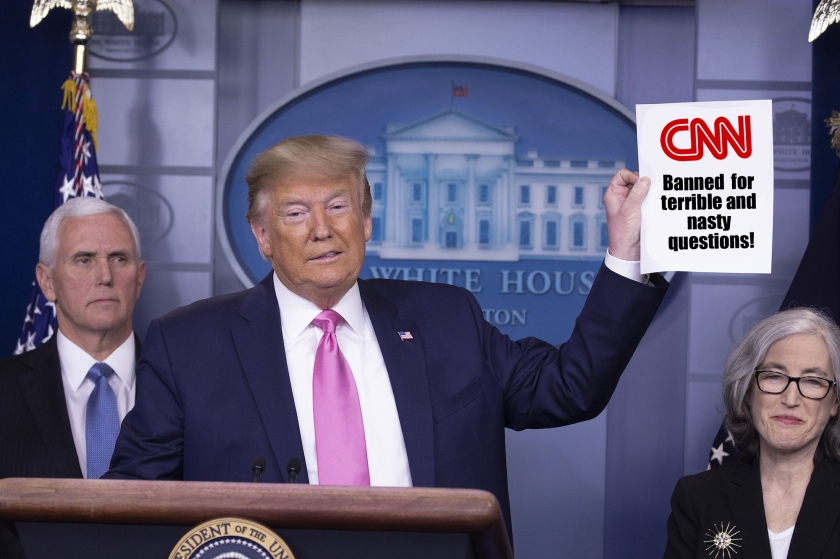 He could have just said: “Of course people are scared. It is normal to be scared. During this time we need to put aside our differences and support each other. This is so hard.”

Instead he berates a reporter. God, do I wish dreams could come true as locking him up in a room seems so the least we can do during this crisis and frankly, in the realm of my dreams, that’s a relatively benevolent solution.

His insistence in referring to covid- 19 as “The China Virus,” is another case in point. China was deceitful about revealing what impact the virus was having there, but the U.S. knew about its devastating effects in January and The Don just called it a hoax and denied its severity. If we had dealt with this then, we would be in a much different place now. In fact, one can say that The Don’s behavior was no different than the president of China’s. The fact that we had advanced notice of what was going on and did nothing until recently is the fault of the president. It’s the old reliable playbook; the “crooked Hillary playbook, where you blame someone of the very thing you are guilty of.

And while The Don plays his petty politics of grievance, hospitals do not have enough masks for doctors, there is an unconscionable shortage of ventilators and rather than operationalize a war-time initiative by not just invoking the DPA, but ordering it to mobilize, the now self-proclaimed “War-Time President” is leading us in to battle the same way doctors without masks and protective gear are fighting the virus.

Let’s have a shout for two American patriots Senators Burr and Loeffler, who, in mid January, were briefed privately about the potential devastation of the virus and continued to feed the public pollyan-ish information while divesting of significant stock. Heinously, Burr and Loeffler did virtually nothing to protect the health and safety of their constituents or of Americans in other states. Burr even went so far as to co-write an article for Fox News.com bragging about the country’s readiness.

And wouldn’t you want to see the stock transactions of The Don, his family and his cronies as well? As MAGA crowds are known to cheer: “Lock them up!”