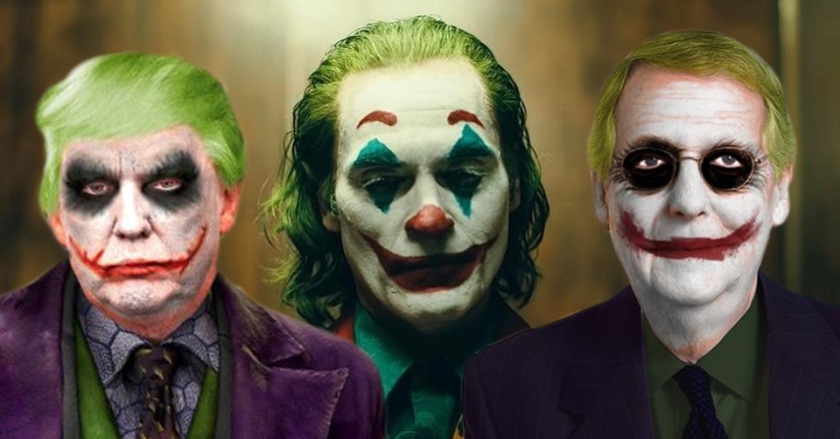 Since we are in the middle of awards season, let me begin by saying that Joaquin Phoenix’s performance in the dystopian film “Joker” is one of the most riveting and moving performances I have seen in years. What makes his performance so breathtaking is not only his ability to inhabit the character fully, but to somehow make a man who embraces violence sympathetic. It’s not that I am condoning violence, but rather I am acknowledging that being beaten down by a sometimes cruel and unfair world can transform people: sometimes for the better and sometimes for the worse.

But enough of the Oscars and Hollywood, as there is another show playing, being writ large on our national psyche, that has its own set of awards; and like the Oscars, there is tough competition and like “Joker’ could be considered dystopian to its core.

The most coveted prize-think best actor in a leading role- is the “Hypocrisy Award.”

Other awards being presented include:

“Who gives a fuck about democracy” award.

“This is so boring” award.

“What’s all the hubbub about?” award.

“Nobody is listening” award.

Let’s focus on the Hypocrisy award.

You think the Joker is evil? This is the man who gleefully calls himself the “grim reaper,” and has said “The Senate is where bills go to die.”

What of his tweeting out a picture of a mock graveyard with a tombstone bearing Amy McGrath’s name (she is running against him for Senate in Kentucky) just hours after a mass shooting in El Paso, Texas, where 22 people were killed and many more injured. Chilling to the bone. Take that Joker!

McConnell’s grim (reaper) determination to see no evidence and hear no witnesses is particularly hypocritical because in 1999, during the impeachment trial of President Bill Clinton, he did favor allowing witnesses. “It’s certainly not unusual to have a witness in an impeachment trial,” he said then.

How could he be so hypocritical you decry? It’s all about power.  Ultimately, Mr. Reaper, one can only hope you reap what you sow and your attempt to hijack a trial will lead you to lose your Senate seat or at least your majority in the Senate. I can’t wait to make a photo of your tombstone.

At this point in time, Graham’s capitulation is so complete that The Don has him shine his shoes by licking them.

During the Clinton impeachment trial, Graham, a member of the House and an impeachment manager at the time, was quite clear about the need for witnesses: “If there’s any doubt, call witnesses.”

“In every trial that there has ever been in the Senate regarding impeachment, witnesses were called,” Graham noted then.

Graham is right about that, as the average number of witnesses is 33 for each of the past impeachment trials.

“It certainly doesn’t have to be a crime if you have somebody who completely corrupts the office of president and who abuses trust and who poses great danger to our liberty, you don’t need a technical crime.”

Dershowitz took his stance to a completely absurd place in a book he wrote in 2018.

“Assume Putin decides to ‘retake’ Alaska, the way he ‘retook’ Crimea. Assume further that a president allows him to do it, because he believed that Russia has a legitimate claim to ‘its’ original territory.” Even that would not merit impeachment and removal by Dershowitz’s standards.

Even loveable Sarah Palin might take issue with that one as she probably would rather just “See Russia from her house,” than in her house. The scary thing about Dershowitz’s statement is that if The Don isn’t removed from office by the Senate or the American electorate, who knows what could happen. It is crystal clear that The Don is compromised by Putin and as Nancy Pelosi said: “All roads lead to Putin.”  If I were you Lisa Murkowski I would be voting for witnesses and The Don’s removal before you are replaced by some Russian Oligarch.

And the winner is? Though all three have embodied the role of hypocrite with the tenacity of Joaquin Phoenix’s “Joker,” the award goes to (drum roll) Mitch McConnell.

McConnell is the immoral character at the center of the Republican’s attempt to obstruct justice by refusing to have witnesses.  (Why can’t we impeach all the Republican Senators for that?)

He and his fellow Republican cronies are protecting a president who they know is guilty of abuse of power and obstruction of congress. In fact, they are protecting a man who, because of his misuse of power, whether it be with Ukraine, women, immigrants, undoing environmental protections and bullying of others, makes him much more evil than the Joker. The Don, who has had all life’s privileges and used it to abuse others, is exactly the kind of person the Joker is fighting back against.

And remember: The Joker is a movie character but The Don is real. But even if the Joker were real he could never be as evil as the frightening  with all the power.