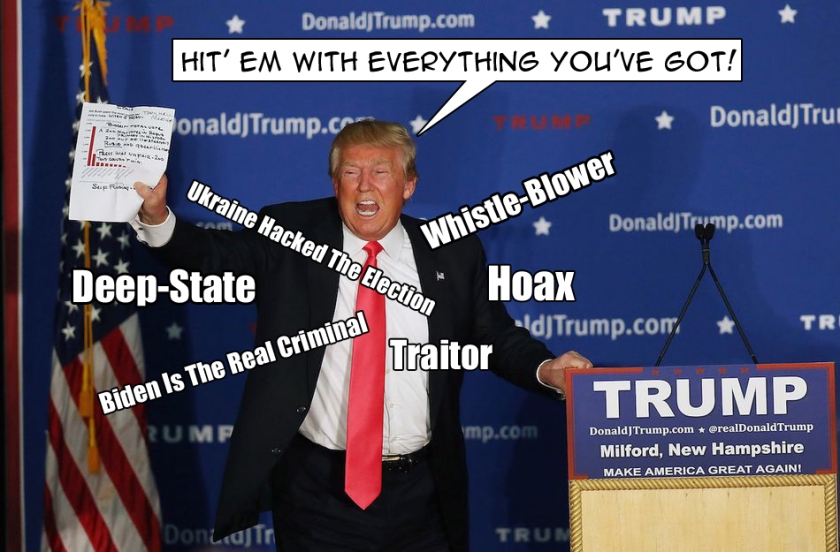 Before I get in to the ways the surround sound of sycophant Republicans have tried to defend the Don, I would like to quote from a recent rally.

“By the way, you’re going to lose your Second Amendment if you vote with Democrats,” the president told that Lexington rally. “You think I’m kidding? … You will lose your Second Amendment as soon — I’m telling you. As sure as you’re standing here. Is anybody sitting? Nobody ever sits. You can sit if you want. No, just stand. You know what they say in the fake news? Look, you’ve been standing. Nobody sat? I don’t know, isn’t that exciting?”

I don’t know about you, but if I didn’t know this man was president of the U.S., I might think he was someone who had just been discharged from a psych emergency room and was treating random people to a bizarre game of Simon Says.

Simon says “sit”, Simon says “stand, sit, stand, sit stand”. Anyone left in the game? The Republicans that’s who! Would you let him play hide-and-seek with your children?

Republicans, what will you tell your children when they ask you why you defended this man?

And with all the Impeachment hoopla, the fact that the president of the U.S. has just admitted he scammed people (at a fundraiser where he claimed to be raising money for the military and used it for personal reasons!)  through his “faux charity” and had to pay $2 million fine barely gets any attention.  Add this to the fact that he had to pay $25 million to people who were scammed by Trump University. Shouldn’t this be enough for Republicans to say: maybe he isn’t the kind of guy we want our children to admire?

Oh yeah, didn’t they say that when the Access Hollywood tape came out. Something like: “How could I look my daughter in the eye if I supported a man like this? Guess your daughters weren’t so important compared to your political career. Frankly, I hope they never forgive you for forsaking your morality.

So now that we are about to hear public testimony regarding The Don and his cronies involvement in a shakedown of the Ukrainian government, the Republicans are mounting their defense of the defenseless.

Once again, these politicians will have to look their children in the eye and explain to them why they defended a man who has used his power to extort favors. They will have to explain to them why they defended him after he shook down the Ukrainian government, withholding crucial military aid in their conflict with Russia, compromising the Ukrainian and the U.S’s national security. Extortion is a crime in this country but according to Republicans, not for The Don.

Let’s take a look at the evolution of the defense of the criminal in White House.

The whistle-blower complaint against Trump is invalid because it’s based on hearsay. The Republicans are obsessed with the identity of the whistle blower; after all, he started this Ukrainian mess. Once outed, they can undermine his credibility, even though every witness who has testified has verified their account.

This is a hoax perpetrated by Democrats and Never-Trump Republicans. Wah, wah, wah! The whiny Republicans. Every time anyone says anything negative about The Don, the deep-state is to blame.

The impeachment inquiry is a sham. After all, it is just so out of control to impeach a president for shaking down a foreign government to get dirt on an opponent while creating a national security risk?

How about Lindsey Graham’s “stupid” defense: “The president and his people have no idea what they are doing, and thus are too stupid to pull off a quid pro quo.

“It was incoherent,” Graham says of Trump’s Ukraine policy. “They seem to be incapable of forming a quid pro quo.”

“I’ve written the whole process off,” Graham said. “I think this is a bunch of B.S.”

And then there is The Don asking William ‘Lower the Barr’, to hold a press conference clearing him of any wrong doing. And lo and behold, The Don’s Roy Cohn does have a bar he won’t cross as he has surprisingly refused to do so.

Mike Mulvaney and Rudy G. were responsible and the president was too busy playing golf to have the time to plot this.

Gordon Sondland, who received an ambassadorship after donating a million dollars to The Don’s campaign (quid pro quo?), who was once a“Great American,” is now someone “I hardly know.” He did some bad stuff and is the real culprit.

Alexander Vindman, a decorated war hero, is a double agent working for?

The Ukraine hacked our election. The Russians would never do that.

And “Russia, if you are listening, everything is going to be fine- and will you do me a favor? Will you investigate Joe Biden, please? After all, if it weren’t for you I wouldn’t be president.

So I say to you Republicans: When your children look you in the eye, what are you going to tell them when they ask you why you defended this man?