(In this piece, all the quoted parts are actual statements that were made.)

The Don: Hey Mulvaney, good try out there. Especially the “get over it” part. Let’s put those shirts and hats on to the White House website side by side with the MAGA stuff. Cha-Ching $$$

And Mickey, we can add “Get over it” as a refrain at my rallies. But first and foremost, never to be topped, is “Lock her up” and now “Lock him up” for the slimy, corrupt Bidens. Have you ever seen a more corrupt father-son duo?

Mulvaney: Really Mr. President, how low can you go? And such hub-bub about Ukraine. We were just practicing politics as usual. So how about everyone just:

The Don/Mulvaney (together) “Get over it!”

The Don: Can you believe how crazy everyone got about the G-7 at my Doral property. You’d think I shot someone on 5th Avenue.

Mulvaney: Ha! Mr. President that remains one of my favorite things you have said, along with shit-hole countries and good people on both sides. And comparing the impeachment bull to lynching, now that’s something.

The Don: So sad about the G7. I would have given them an experience they would never forget. After all, I spent my whole life building great properties, some equaling the Taj Mahal.

And wouldn’t it have been great to go out on the golf course and find Putin at the 1st hole? Surprise everybody! The G7 just became the G8. The 7 would be outraged but we would just yell:

The Don/Mulvaney: “Get over it!” 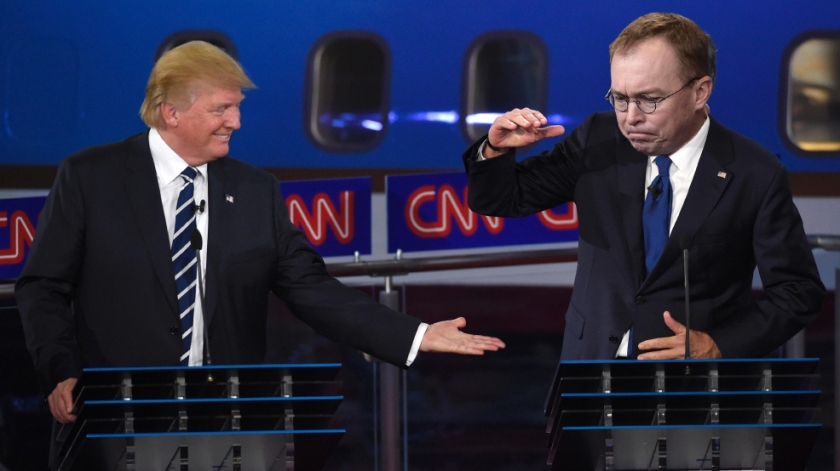 The Don: And now we have the silly Syria thing. Even the wimpy Republicans got bent out of shape. McConnell said I “made a great mistake.” Lindsey lost his shit and said there would be “ethnic cleansing.” And Mitten the Kitten said it would be “a stain” on our country because we abandoned our allies. Frankly, between me and you Mickey, I wouldn’t mind a little of that ethnic cleansing at home. My base would love it.

Mulvaney: I bet they would. You are so loved by so many.

The Don: Do me a favor Mickey, get me the Kurdish commander, Chobani, on the phone. Just want to reassure him.

The Don: I hate yogurt! Just get me whatever his name is on the phone.

The Don: This is President Trump. Is this Chobani?

The Don: Let’s not quibble about names as it is “a great day for the Kurds and civilization.”

Commander: How could you say that? You are subjecting my people to displacement and slaughter. There will be ethnic cleansing of the Kurdish people from Syria.

The Don: Again with the ethnic cleansing. You’ve been talking to my boy Lindsey? Listen Chobani, you’ve “got a lot of sand over there. “There is a lot of sand that they can play with.”

Commander: What? People are dying and being forced from their homes you and you are talking about sand?

The Don: You know it’s a shame I had to cancel the G7 at my Doral Hotel as I was looking to upgrade the sand for my sand traps and since you have so much, I thought maybe we would buy some from you.

Commander: Not only have you abandoned your friends, the Kurds, who have been essential in dismantling ISIS, but your actions are freeing thousands of ISIS members and their families and you have given Putin a stronghold in the region. How could you do this?

Commander: You are responsible for killing my people.

The Don: Let’s not get so high and mighty Chobani as the Kurds are “no angels.” And anyway, I am intervening. Erdogan got a bit greedy. Gave him a foothold and he wants the entire territory. Didn’t you see the letter I wrote him?

The Don: I will read it to you. It will reassure you

President of the Republic of Turkey

I have worked hard to solve some of your problems. Don’t let the world down. You can make a great deal. General Mazloum is willing to negotiate with you, and he is willing to make concessions that they would never have made in the past. I am confidentially enclosing a copy of his letter to me, just received.

I will call you later.

The Don: See Chobani, I am intervening on your people’s behalf.

Commander: That’s what you wrote?

The Don: It’s cool, right? I wrote it like a real letter, the way you learn to write one in 3rd grade. 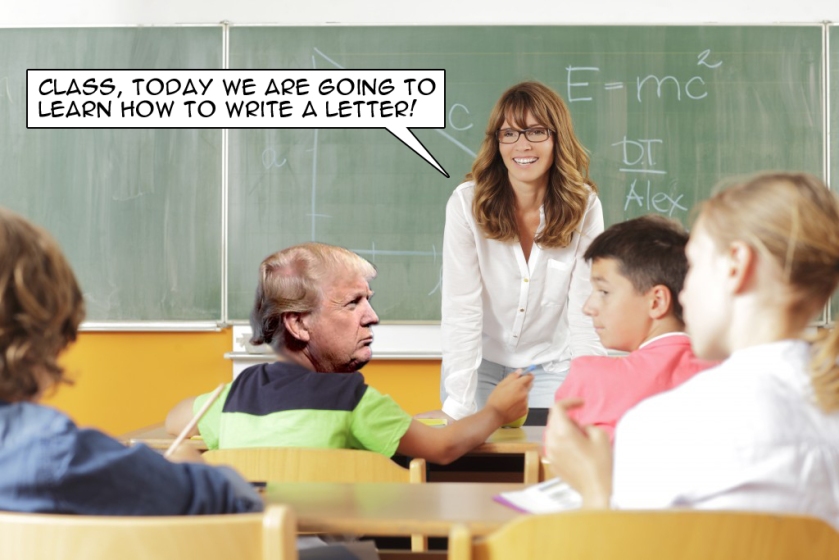 Commander: Third grade, that’s about right, Mr. President. I heard Erdogan ripped it up and threw it out.

The Don: Don’t get cute with me Chobani and that’s fake news about him throwing it out. I hear he framed it and put it up in his palace.

Commander: All I have to say to President Trump is history will look upon you unfavorably as you are inhumane. It will look upon you forever as the devil because bad things have happened. You are a weak man and a fool. I definitely will not call you later. And one more thing Mr. President: I hope they impeach and convict you and you wind up in prison you back stabbing, amoral bastard.

The Don: Mickey, all I can say about Chobani is he needs to:

The Don/Mulvaney: “Get over it.”