Let’s face it: The Democrats lack guts and imagination.

While they are on stage babbling about healthcare, The Don and his cronies continue to break norms, laws, and commit heinous acts. (I am a supporter of Medicare for All but know that congress has to pass that bill, and at this point, this will never happen.)

Let’s start with the emoluments clauses. It comes in two delicious flavors; domestic and foreign.

Article I, Section 9, Clause 8 of the Constitution prevents the president and other federal officers from accepting “any present, Emolument, Office, or Title, of any kind whatever, from any King, Prince, or foreign State,” without Congress’ consent.

The Domestic Emoluments Clause, clause authorizes a fixed presidential salary that cannot be augmented by Congress during the term, and specifically states that the president not “receive within that Period any other Emolument from the United States, or any of them.”

It is not an exaggeration to say that The Don’s entire presidency has functioned as a kleptocracy. He lied to us about divesting himself from his businesses while president, and has been in violation of the emoluments from his first day in office.

Let’s start with foreign affairs. But before we do, I need to bring up a comment that the Princess of Darkness, Ivanka, recently made during an interview with Entertainment Tonight in Jackson Hole Wyoming. According to two people in attendance, The Don passed on his moral compass to her.

Now if you were Kate Mckinnon on SNL playing Ivanka saying: “Oh, my daddy, he just has the greatest and biggest ethical and moral compass in the world. He just swings that big beautiful, gold thing and the world sways in his direction,” the audience would probably crack up.

And just to make sure there was no confusion, Ivanka made similar comments at the Republican National Convention in 2016, Politico noted. “My father taught my siblings and me the importance of positive values and a strong ethical compass,” she said then. 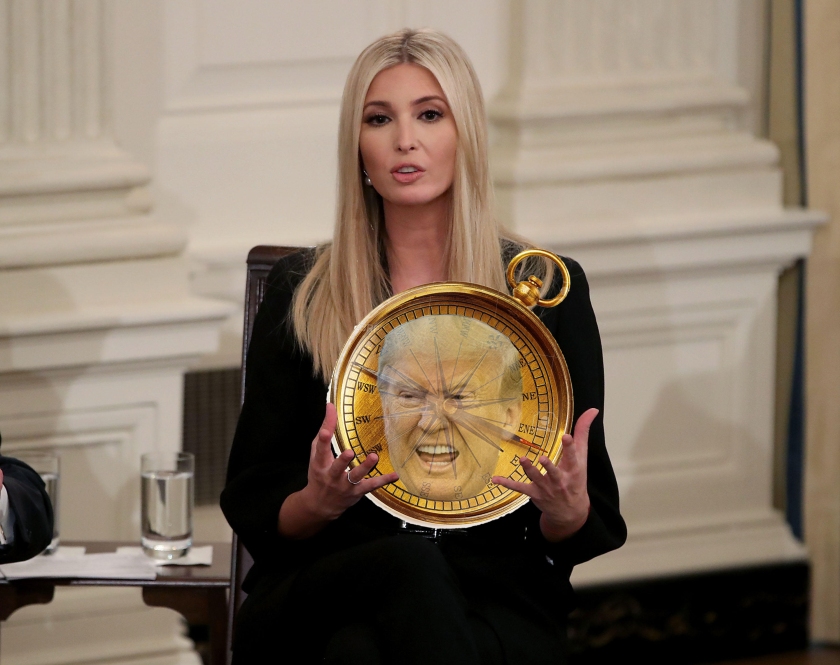 Let’s return to the man with moral compass. Let’s take his Washington Hotel. Is that a domestic or foreign violation?

The Don has made millions of dollars from friendly travelers from the following governments: Kuwait, Saudi Arabia, Malaysia, and Georgia (the country.) When The Don learned that diplomats from Georgia were staying he supposedly remarked: “There are two places named Georgia? Wow, that is really something!”

Diplomats of these governments have paid premium dollars to stay there courting favor with the administration.

And there is the state of Maine whose Governor Le Page and his entourage spent $22,000 on a stay at The Don’s hotel.

Here’ what Le Page, who is in a bit of lobster pot hot water regarding his use of taxpayer money for his sojourn had to say:

“I didn’t realize that a night in his hotel and he’s in my back pocket.”

Rumor has it that Le Page’s rational for the trip was to scope out a new place to hold Maine’s annual Lobster Festival, traditionally held in Rockland, Maine. When queried about this, he was rumored to have said: If the president can have the G7 summit at his Doral property, what’s wrong with Lobsterfest in D.C? Got to say Le Page does have a point here.

Yes it is true that The Don is looking to have the G7 stay at his Doral property in Miami. No credit cards. Just dollars!

What about the infamous Turnberry Affair: U.S. military planes fueling up at a tiny airport only 30 miles from The Don’s failing Scotland golf course? Heard the military people got discounts to play golf. Rumor has it that one of men looked around and said: “Who the fuck plays golf?” Another serviceman went to the bar while the plane was filling up on fuel and ordered a beer. “I’ve got this voucher here with the president on it.” The bartender looked down and said: “Sorry sir, that just gets you a glass of water, and that doesn’t cover using the restrooms.”

Turns out that the Saudis are personally bankrolling Turnberry. It was just reported that 25 Saudis, with 100 suitcases, stayed for a week. The Saudis just love, love, love golf!

Then there is Mike Pence stay in Ireland at The Don’s property there. Not so weird. Wouldn’t you stay 180 miles away from the conference you were attending?

And William Barr, The Don’s personal attorney, is going to have his holiday party at Mar-a-Lago.

And who knows the amount of money The Don and the prince of darkness, Jared, have made in their dealings with the Crown Prince of Saudi Arabia? 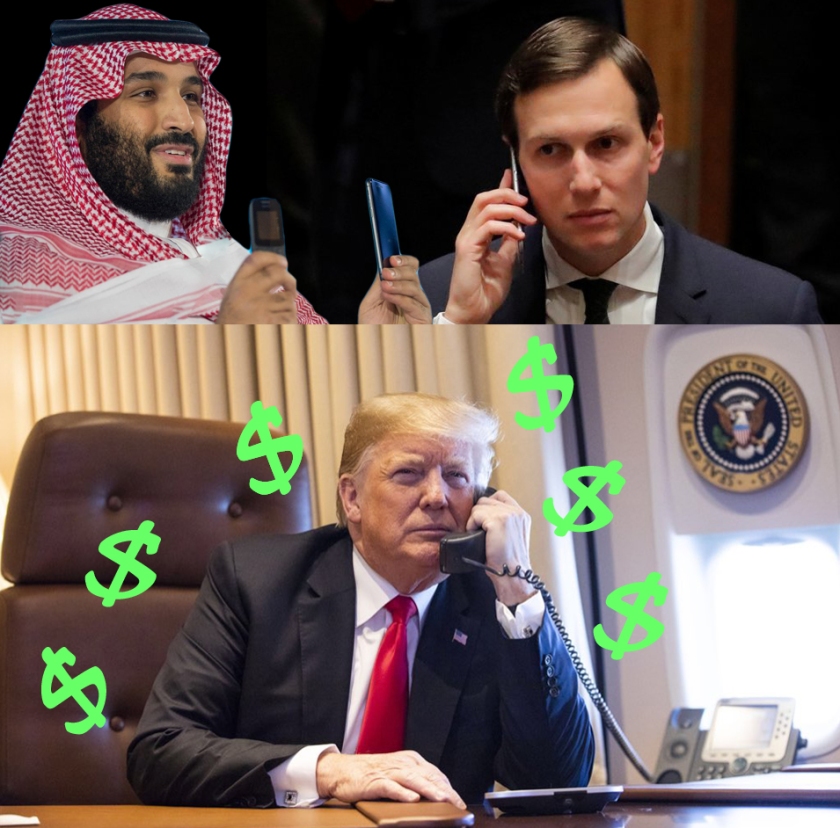 What did Ivanka say? She got her moral compass from her daddy?

Hey Ivanka, does that include deregulation of pesticides that are known to cause brain damage in children?

How about keeping people at the border in cages like animals?

And now for something straight out of the devil’s playbook.

Sending children home to die! That’s right, the great moral compass has sanctioned that children who are here illegally, receiving life saving medical treatment, will have to leave the country.

From my vantage point that makes The Don an accomplice in murder! Actually, let’s dispense with the niceties of accomplice and call the devil what he is: a murderer!

Which brings me back to the last democratic debate and their lack of guts and imagination.

So what should the democrats running for president have done during the most recent debate?

They should have thrown out all the pomp and circumstance and gone rogue. They should have pulled a Howard Beale Network moment and taken over the airwaves and done some guerilla theater. It is time to take the narrative from this cruel-hearted, malignant narcissist and take it to him.

In my fantasy, the Democrats would stand by their podiums and when the first question about healthcare was asked they would have said: “We are pulling ‘a Trump and all negotiated rules are off.”

Each one would place a mask of The Don on their face and together say:

“Hi, I am Donald Trump. This is how I am making America great again:

Then one by one they would say:

I, Donald Trump, separate babies from their families creating life long PTSD for these children.

I, Donald Trump, find that putting people in cages is the American way.

I, Donald Trump, am causing brain damage in children by allowing poisonous pesticides to be reintroduced.

I, Donald Trump, am a racist.

I, Donald Trump, am a misogynist.

I, Donald Trump,  am a sexual predator.

I, Donald Trump, laugh at all of you as I enrich myself on the presidency.

I, Donald Trump, will work with Russians or any other foreign government to win reelection.

I, Donald Trump, am a criminal. See if you can catch me!

I, Ivanka Trump, have been bequeathed my father’s moral compass!

What do think would happen if the Democrats did that? I’m not sure, but I sure would like to find out. All I know is that as long as we let this sociopath control the narrative we are in deep trouble. It’s time he responded to us!