Last week was a new high for lies and absurdities from The Don.

With hurricane Dorian approaching Florida and the South Eastern coastline, hurricanes are definitely on the country’s mind. People are frightened and the potential for calamitous damage is ominous.

The Don is just so annoyed by these things. Like with so many of his simplistic and doltish ideas (trade wars are “easy to win”?), The Don didn’t disappoint. Evidence emerged that during a national security meeting, The Don floated the idea of nuking hurricanes to stop them in their tracks.

Rumor has it that he compared getting rid of hurricanes to killing flies. “You know, it’s kind of the same thing. These flies, like hurricanes are a tremendous, I mean tremendous annoyance. At Mara-a-Lago and my amazing Doral golf property in Miami, where Russia will return to remake G7 into G8, we have giant bug zappers. A mosquito or fly enters our properties and they are just obliterated. We can get rid of a fly infestation by just zapping them; so why can’t we just do that with hurricanes? All I can say is that this hurricane better not touch Mar-a-lago or my Doral property in Miami.

But what we actually know he said was:

“They start forming off the coast of Africa, as they’re moving across the Atlantic, we drop a bomb inside the eye of the hurricane and it disrupts it. Why can’t we do that?”

So I ask: Why can’t we do that? Just blow that motherfucking thing up. Maybe make it in to a new reality show called: “Eye of the Storm?” On second thought I like: “Let’s Blow That Motherfucking Thing Up.”

The Don, being a man of science, might have thought about what the National Oceanic and Atmospheric Administration stated:

“Detonating a nuclear weapon over a hurricane might not even alter the storm,” and the idea “neglects the problem that the released radioactive fallout would fairly quickly move with the tradewinds to affect land areas and cause devastating environmental problems.”

Well, that probably wouldn’t bother The Don, since maybe all those shit-hole countries responsible for the hurricane would get what they deserved.

So let’s move from hurricanes to phony phone calls. In his attempt to quell the jitters of financial markets, The Don stated that he had received many “high level” phone calls from the Chinese who stated that they wanted to “make a deal” on his easy to win trade wars.

Good news, right? Way to go, China. Finally caving to the big cheese. Got you cowering? Um, say what? Not so fast? What, you never spoke to The Don? This is a prevarication, a product of a delusional man who relies on imagined realities to make it seem he is in control and winning, winning, winning, until you get sick of winning?

And now, let’s move on from phony phone calls, to another imagined connection, the connection between Melania and Kim Jong-un

“The first lady has gotten to know Kim Jong-un and I think she’d agree with me, he is a man with a country that has tremendous potential.”

So the spin masters at The White House had to clarify:

“President Trump confides in his wife on many issues including the detailed elements of his strong relationship with Chairman Kim,” his press secretary, Stephanie Grisham, explained. “And while the first lady hasn’t met him, the president feels like she’s gotten to know him too.”

Who here thinks the president confides in his wife on many issues? Who thinks he confides on her on any issue? Who thinks he thinks that anything she has to say matters to him at all? And finally, who thinks Melania has spoken to The Don about anything? There are only two reasons that Melania is seen with the president: She is not really Melania but a body double and the real Melania is living in exile on Bali, or The Don pays her a million dollar fee for each appearance-  kind of like what the cast members of Friends or Seinfeld used to get for each show.

But for the moment, let’s pretend they did meet.

Kim: Ah, Princess Melania, it is so special to meet you. You are even more beautiful in person than on TV.

Melania: Mr. Kim, it is a pleasure as well. Mr. Kim is that a rocket in your pocket or are you just glad to see me?

Melania: You know who Mae West is?

Kim: Of course you silly goose. I own all the American classic movies. What do you think I do all day, build nuclear weapons? Ha!

Melania: Mr. Kim, now that is a dark sense of humor?

Kim: How about this one? What do you think I do all day, terrorize my people?

Melania: Oh Mr. Kim, you DO have a rocket in your pocket!

Kim: (Blushes again) You are charming Melania, but you will never disarm me. By the way, the dolt doesn’t know where you are, correct?

Melania: Of course not. He thinks I am on three day school trip with Baron. The secret service is covering for me.

Kim: Beautiful, and clever as well. So Melania, are you jealous of my love letters to your husband? Has he shared them with you?

Melania: He did share one- pretty corny, Mr. Kim.

Kim: Of course they are. They are just embellished Hallmark cards. (Kim goes in to a drawer and pulls out a bunch of greeting cards. 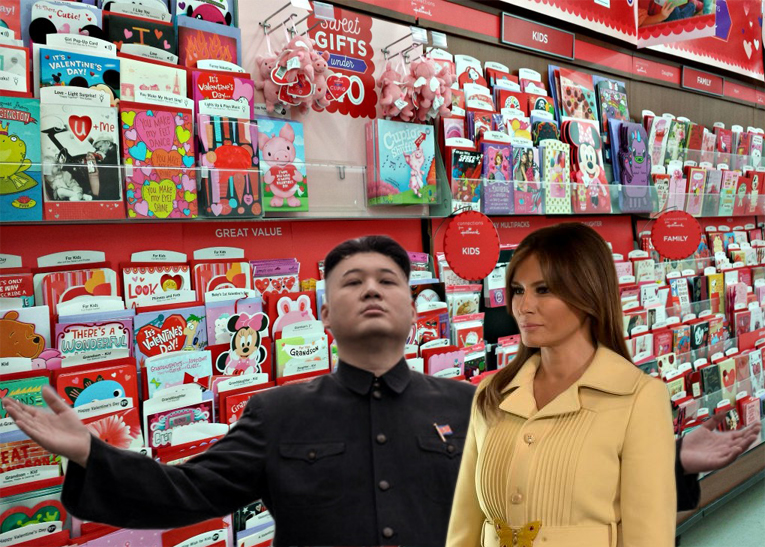 Melania: (laughing out loud) You’re a hoot Mr. Kim. A lot more fun than the dolt, oops, I mean Donald.

Kim: It’s getting pretty dark in America. I just read in your NY Times- I have an online subscription- that your husband is sending letters to immigrant families giving them 33 days to get out of the country and many of them are receiving medical treatment that they can only get in America. So your darling husband is sentencing them to die?

Melania: Tragic, but he is the president and he controls my money so…

Kim: I see that your hands are tied. You are sort of a prisoner yourself?

Melania: (With a vacant look shakes her head in acknowledgement.)

Kim: Oh Melania, don’t be sad. But I do have to say that is some pretty demented stuff. Even I wouldn’t do that kind of stuff. When I kill people it is because they are my enemy. But sentencing innocent children to die? That’s some cold stuff, even for a psycho like me.

Kim: Melania my dear, you didn’t travel all this way to be sad. I have an idea.

Melania: What is it?

Kim: One of my favorite American classic films is the King and I. You know that one?

Melania: I love that movie. And so apropos for this moment and so far it has been great fun “Getting to know you.”

Kim: “Getting to Know you“ is such a lovely song. So I have one question for you, princess Melania: Shall we dance?