“I alone can fix it,” The Don proclaimed during his campaign.

Follow me and I’ll set you free. (And if you don’t, I will smite you and bring a tweet upon you the world has never seen!)

The Don has heard the word. God has whispered in his ear and told him: “You are just only beginning to realize your greatness. Never forget what I told you at the burning bush: God is not about love, but about hate. Be petty and small-minded; shun generosity. Live by this credo and the world will bow to you.”

“And remember: Your hands may be small and your thoughts petty, but you have been touched by the hand of God.”

Rumor has it that The Don said: “Someone told me it’s like when ET heals the boy’s wound by touching it with his finger- that I have magical powers.”

Another someone told The Don that Michelangelo’s famous image on the ceiling of the Sistine Chapel, where God is reaching out to create Adam is really about him. 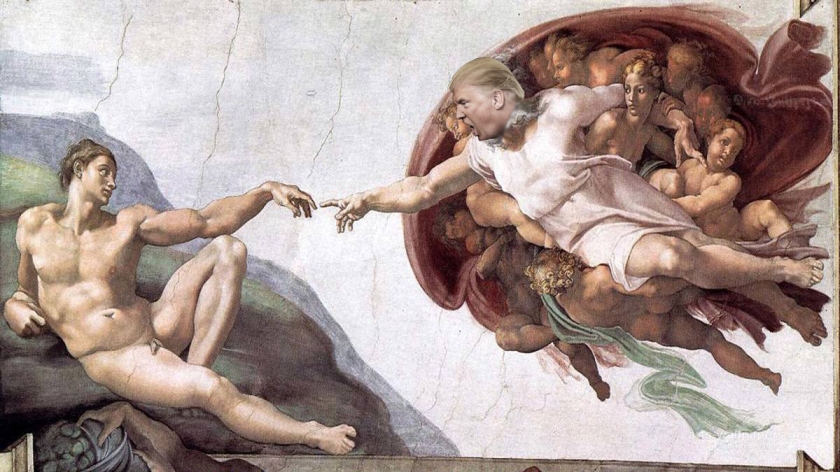 “The Chinese know this about me, and that’s why they are so afraid of me. “I am the chosen one” when it comes to bringing those rice eaters down. “Why does everything have to be eaten with rice? Rice, rice, rice.”

As far as stealing our intellectual property (which is a genuine concern), The Don, being the penultimate narcissist, was rumored to say: “They can’t really be stealing intellectual property because I have the greatest brain ever and my brain is still amazing, doing great things, so if they ever tried to steal it, I would know. Let me tell you, no one steals the intellect of the greatest brain in the world. It’s too smart to be stolen.”

The Chinese do not want to mess with The Don as he can totally outsmart them. He will show them. In a fit of rage, The Don responded to the Chinese increasing tariffs on American goods by proclaiming: “Our great American companies are hereby ordered to immediately start looking for an alternative to China.”

The Don’s great intellect imagines this act like one of his divorces. His great intellect doesn’t comprehend how impossible that would be given the inter-relatedness of the global economy. Can you imagine the chaos to follow if all American companies stopped doing business in China? How a bout a worldwide depression?

“But some Chinese love me! Just look at those people from Egg Foo Young (actually it is Falun Gong), you know those people love me and know I am their savior. I hear they carry pictures of me in their phones and like crazy Muslims will pray to me five times a day. It’s a beautiful thing, the praying and all that, as they appreciate me, and my ‘annointedness’, but the Muslims, who the hell are the praying to? What a waste of time.” 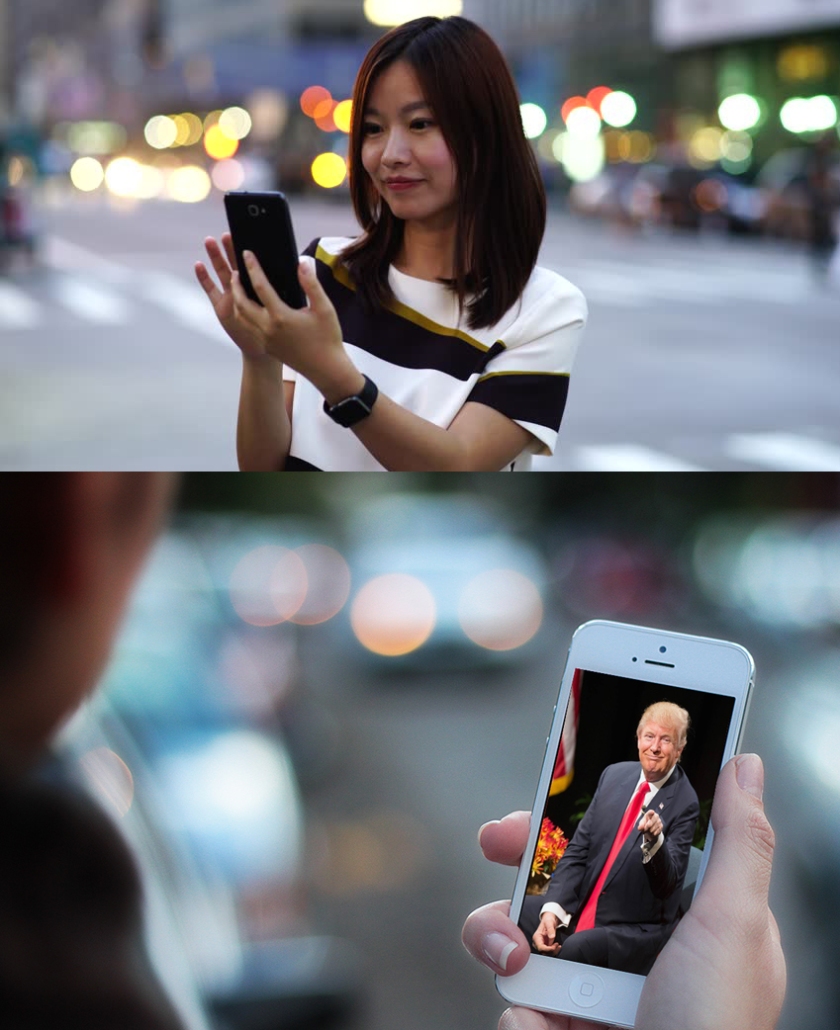 The Don has a point there as former practitioners of Falun Gong, a radical religious anti-communism group in China, have revealed that believers think the world is headed toward a judgment day, where those labeled “communists” will be sent to a kind of hell, and those sympathetic to the spiritual community will be spared. Trump is viewed as a key ally in the anti-communist fight.

And then there are the evangelicals.

“I think any Jewish people that vote for a Democrat, I think it shows either a total lack of knowledge or great disloyalty.”

Yes, and as our chosen one, with the greatest intellect, your knowledge should be our guide. How dumb can those Jews get? After all, 80% of Jewish voters vote Democrat. What I want to know is how any Jew can vote for someone who thinks it ok to lock people up in cages or as some have said “concentration camps!” Or for that matter (as a Jew myself), how does any Jew think it is ok to create an Apartheid state for the Palestinian people.

You see, it is all about the after-life. It doesn’t matter that babies are separated from their parents, or that the environment is being destroyed, or that The Don has been accused of rape and sexual assault-even admitted to it in the Access Hollywood video, or that he is a racist.

It doesn’t matter that his policies hurt the poor, that he is trying to take healthcare away from some of these very same people who believe in him and that he is a low life criminal who committed insurance and tax fraud and has already been indicted as a co-conspirator with Michael Cohen in breaking campaign finance laws. None of it matters because it is about the after-life; it’s about the rapture, silly! It’s about the ascension of all righteous believers to heaven. But, there’s a catch.

When the Rapture comes, the holy alliance between Christians and Jews will suddenly become unholy. Christians will rise and Jews will be left behind to deal with the Antichrist, plagues, sores, boils, frogs and locusts from the ”bottomless pit,” each with a human face, horse’s body, scorpion’s tail and a sting that torments for five months.

‘See you suckers!’ they will yell as they float up in to the kingdom of the Lord. In other words, the only reason the evangelicals are such supporters of Israel and the Jews is because ,according to their beliefs, the evangelicals will not be able to take the stairway to heaven without the annihilation of the Jews first. Pretty twisted loyalty, you think?

According to Leon Wieseltier, the Jewish scholar and literary editor of The New Republic, ”the evangelical Christians condescend to the Jews by offering their support before they convert or kill them.”

And what does evangelical Mike Pompeo, our beloved Secretary of State, think about The Don being touched by God?

In an interview in Jerusalem, the Christian Broadcast Network’s Chris Mitchell asked Pompeo, “could it be that President Trump right now has been sort of raised for such a time as this, just like Queen Esther, to help save the Jewish people from the Iranian menace?”

“As a Christian, I certainly believe that’s possible,” Pompeo said.

Pompeo added that he is “confident that the Lord is at work here” when he sees the “remarkable history of the faith in this place and the work that our administration’s done to make sure that this democracy in the Middle East, that this Jewish state, remains.”

Pompeo continues: “He (The Don) is a miracle sent straight from heaven to bring the nation back to the Lord. I have also learned that resistance to Mr. Trump is tantamount to resistance to God.”

Let’s repeat. The man who represents the U.S. in all matters of international diplomacy said: “resistance to Mr. Trump is tantamount to resistance to God?’

Heaven help us all!