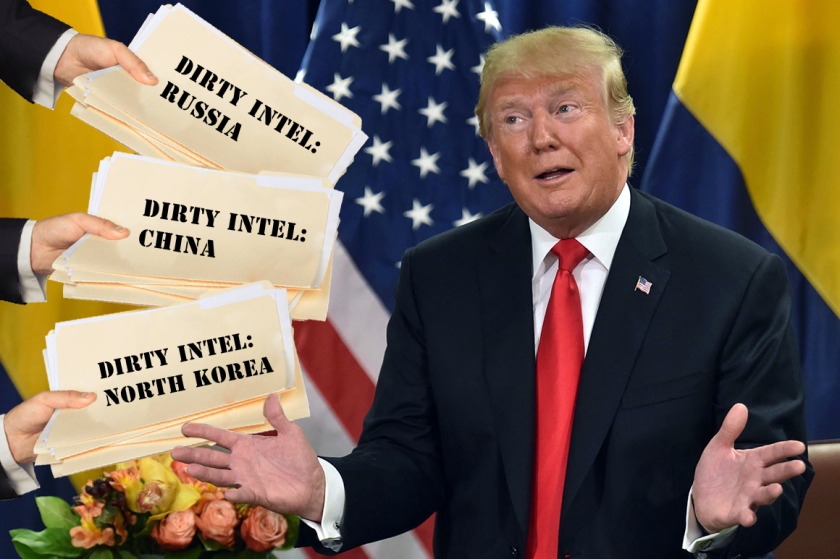 So the truth is finally out. Mr. Delusional “no collusion, no collusion” said he believes in collusion, cavorting with a foreign government to get “oppo research” on an opponent.

Mitch McConnell, who now refers to himself as “the grim reaper,” (every bill that comes before him dies) has declared that as far as collusion goes, the Mueller Report exonerates The Don and that the “case is closed.”

But The Don’s comments to George Stephanopoulos turn McConnell’s distorted fairy tale on its head, as The Don basically said: “Hey, what’s wrong with collusion?”

McConnell is so frustrated by The Don digging himself in to another hole, that it is rumored he has tugged his fleshy chin down to his stomach, a site that even a grim reaper would have to turn its eyes from! 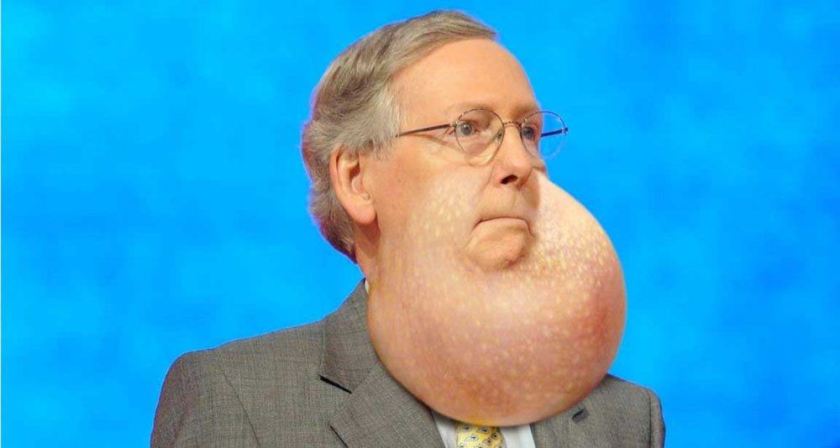 Don please, make up your mind? If collusion is cool then why all the heat about saying you didn’t collude?

I, for one, am excited that you actually said something true. It’s such a relief. Like certain species that are threatened with extinction, the world has run out of Pinocchios to give you. So hail to the chief for uttering an honest word. America is proud, as we didn’t know you had it in you!

In the interview with George Stephanopoulos, The Don was quite clear about how he feels about getting information from a foreign entity: “I think I’d take it.” And since The Don doesn’t actually think about anything, we should be impressed to hear him use the word think. (First honesty and then thinking. Hey, what’s going on here?) What Don said translates in to: “Shit yeah, you bet your ass I’d take it. What kind of fool would you have to be to turn that down? Turn it over to the F.B.I.? What world you living in?”

All that work by William “Lower The Barr” to create a false narrative exonerating the Don from the findings of the Muller Report, feels even more void of reality now.

Ellen Weintraub, the chair of the Federal Election Commission, said this about The Don’s comments: “I would not have thought that I needed to say this… “It is illegal for any person to solicit, accept, or receive anything of value from a foreign national in connection with a U.S. election. This is not a novel concept.”

Wasn’t it rich when The Don derided F.B.I. Director Wray who recently said: “I think my view is that if any public official or member of any campaign is contacted by any nation state or anybody acting on behalf of a nation state about influencing or interfering with our election, then that’s something that the F.B.I. would want to know about,”

The Don just flat out said that “The FB.I. is wrong!”

Even William “Lower the Barr” stated in front of congress that taking information from a foreign government that could influence an election would be a crime. That’s kind of crazy isn’t it? Even The Don’s personal attorney posing as Attorney General thought it was some kind of bad hanky-panky.

Everyone was so outraged that The Don would take a look-see and that he was willing to “take it.” The fact is, he had already taken plenty of it from the Russians during his campaign. The outrageous and very, very very stupid thing is that he said it out loud. He was just so casual about it, like he was deciding whether or not to take a package from Fed Ex that just appeared at his door unexpectedly.

None of this should surprise us at this point. This is an individual who has taken and taken and taken his whole life. His credo is and always has been: I don’t care whom I have to screw or whose life I have to ruin, as long as I get what I want. That greedy, narcissistic position informs everything he does from the moment he wakes to the moment the lights go out. It spans fucking the workers building his buildings to the country he presides over.

Perhaps he should change his slogan from ‘Make America Great Again” to “America I’m On The Take Again.” 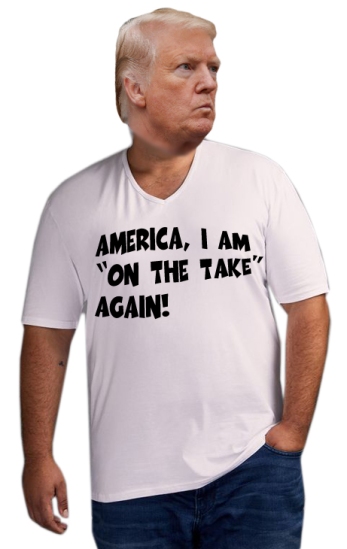 Though the Mueller report was unable to establish criminal conspiracy between The Don and his administration and Russia, it didn’t mean there wasn’t collusion. It is clear from the report that The Don and his gang were more than happy to embrace Russia’s support to help them win the election.

As we now know, The Don’s campaign had over a hundred contacts with Russians. There was the cyber back channel (Jared), Island Hopping channel (Eric Prince in the Seychelles), secret Trump Tower channel (Don Jr.’s famous “I love it” comment regarding getting dirt on Hillary), Houses of the Rich and Famous (Moscow Tower planning), The Inn Your Face channel (The Don’s meeting with Ambassador Kisliak in the oval office without anyone knowing it) and the Putin rules, the F.B.I. drools channel. So many channels: perhaps Spectrum TV or You Tube should have a special package –like one of those sports packages where you can watch every game of any sport simultaneously-called the Russian Channel?

When Stephanopoulos brought up the strange idea of turning over information to the F.B.I. and used the example of Al Gore’s campaign turning over documents the campaign received regarding Bush’s debate prep, The Don flippantly said: “That’s different, that was stolen.”

What he muttered under his breath was: What an idiot Gore was for not taking it. I mean, guess who lost? That’s what happens to goody-two-shoes. Reality isn’t like that. When opportunity strikes, you take advantage.

But Don, what about the stolen emails from the DNC and John Podesta?

Listen what kind of kumbaya, pansy world do you live in. Either you are a taker or you are a loser. If it gives you an advantage, stolen is good, too. Get real. Don’t tell me you never got some dirt on someone and spread a rumor so you could get ahead. I could just see that are such a suck up on the surface, but a real conniver, aren’t you?

And didn’t you just love The Don’s reference to Norway?

“There’s nothing wrong with listening. If somebody called from a country, Norway, ‘We have information on your opponent’ — oh, I think I’d want to hear it.”

But would The Don “take it” if the information was from “shithole” countries like from Nigeria or Haiti? Would you be surprised if he responded “That’s way too dirty, even for me!”