Even before The Don touched down in London, the fireworks had begun. It had all the makings of a reality TV show called “I Should Be King And Why Does Someone So Short Get To Be Queen?”.

We had the Meghan Markle flare-up where The Don responded to her calling him“divisive” and “misogynistic” by referring to her as nasty. This was then followed by a complete denial of having said she was nasty, despite it being heard by everyone in the world.

Taking a page out of his initial response to the infamous “Access Hollywood Tape”, when he claimed the person saying “grab her by the pussy” wasn’t his voice, it was rumored he said: “I would never call a black women nasty, or for that matter, anyone women nasty, unless of course, they were involved in doing the nasty with me. So couldn’t be me you are hearing. And God knows I’ve done a lot of nasty in my days. Just look at these hands.”

On Jeremy Corbin- “I think that he is, from where I come from, somewhat of a negative force. I think that people should look to do things correctly as opposed to criticize. I really don’t like critics as much as I like and respect people that get things done.”

That’s rich coming from the most negative force in the history of our country, from a man that criticizes everyone who doesn’t love, love, love him; and as far as doing things correctly, his greatest achievement was colluding with Russia to win the election.

As for the mayor of London, The Don called him a “stone cold loser” and said he was doing a terrible job of running Britain’s capital city.

Not to miss a beat, The Don tweeted that Mayor Khan was as bad as the “very dumb” New York Mayor Bill de Blasio, “only half his height.”

Rumor has it that The Don complained: “I don’t get it,”  I am sooo much bigger than Kahn and even bigger than the Queen, but I am not the King? Conspiracy? If I lived in England I would definitely be the King.”

The Don claimed that he had been greeted by “tremendous crowds of well-wishers” and that there was “great love all around.” It’s just not fair said the Orange Baby.

But The Don did seem to enjoy the pomp and circumstance of his visit with the Queen. The Queen took the opportunity for a Kumbaya moment and spoke of the partnership between the U.K and U.S.: “After the shared sacrifices of the Second World War, Britain and the United States worked with other allies to build an assembly of international institutions, to ensure that the horrors of conflict would never be repeated.”

“While the world has changed, we are forever mindful of the original purpose of these structures: nations working together to safeguard a hard-won peace,” she added.

Though it seemed The Don was smiling during the Queen’s little speech, he was biting his lip. But then suddenly he adjusted his ear and he heard:

“Donald my sweetheart, this is Vlad. You almost forgot to turn on the ear-piece you silly goose. Just Remember, everything that little old silly lady says is just the opposite for us. We are not interested in building ‘an assembly of international institutions’, but tearing them down. We don’t want to ‘safeguard a hard won peace’ but cause chaos and instability in the west. So keep smiling, because together, we will do great things. Let’s speak when you get back home. You are truly very special to me.”

The Queen also gifted The Don an abridged first edition version of the “Second World War” by Prime Minister Winston Churchill. The six-volume history of the war won Churchill the Nobel Prize in Literature in 1953 for its “for his mastery of historical and biographical description as well as for brilliant oratory in defending exalted human values.”

After the Queen handed The Don the book she supposedly turned to her husband and said: “since he doesn’t read, we created a very special abridged version. It’s just one page and says: ‘Together we saved the world!’”.

And what about Melania? Well, she received a beautiful tea set with a note form the Queen that said: “Anytime you want to talk, I’m here for you”. At the bottom of the card was something quite odd: “My favorite movie is Arsenic and Old Lace.”

But the highlight of The Don’s visit was when the Queen suggested that he play one of her favorite childhood games.

“Did you ever play “Pin the Tail on the Donkey, ”President Trump?”

“Nah, I didn’t play games as a child. Too busy learning the real estate business from my father. You know tricks of the trade. Even at five I was great at making deals, learning how to rip people off.”

“Oh but President Trump, this is such a fun game. You put on a blindfold, get twirled around, and have to pin a tail on a paper donkey. You get a prize if you do it!

“We will give you one of our precious King’s Crowns.”

“Now we are talking. Where’s the blindfold? I am sure I will be great at this. I have such great instincts.”

“You are famous for your instincts. You will be great. So here’s how we will play. Every time you exit from a building on your stay in England we will put a blindfold on you and then you will try to “Pin the Tail on the Donkey.”

“Why every time I go out? Seems weird. I want to see the millions of people cheering for me.”

“President Trump, this is how the game is played. You do want the crown?”

“Yes, the crown. I can’t wait to wear the crown. Maybe I will unveil at the July 4th celebration I am panning for myself this year. The crowd will go wild. Though I am a bit confused. How come we can’t play in-doors?”

“President Trump please trust me. I am a wise old lady and this is your best chance to get the crown. I am rooting for you.”

Quite a shrewd Queen as this was what they were protecting the “ass” from. Far from the imagined adoring crowds, this is what The Don would have seen were he take off the blindfold.

A group named Led By Donkeys produced some of the most memorable take-downs of The Don.

Hey @realDonaldTrump, you just endorsed your Brexit buddy @BorisJohnson but he said some VERY NASTY things about you and he doesn’t want you to know. So we projected his words onto Big Ben. Watch with the SOUND ON #TrumpUKVisit pic.twitter.com/etUb6tk9eX 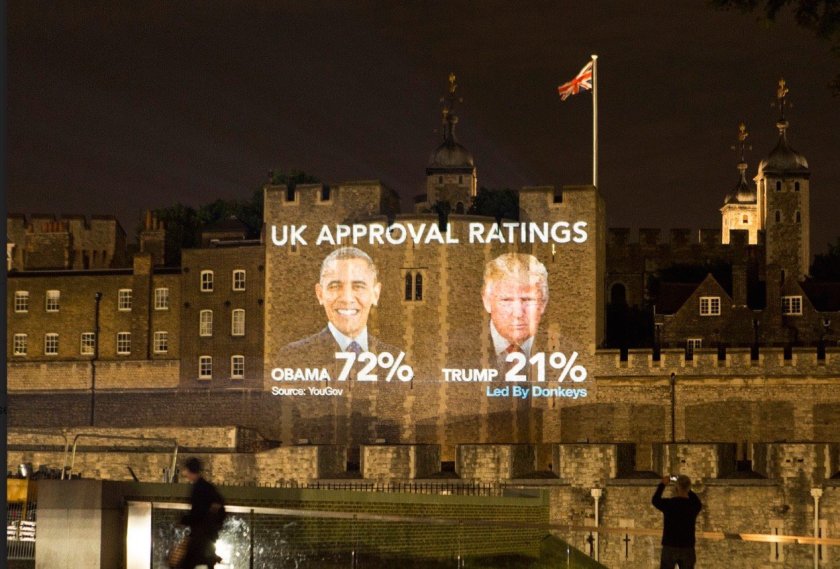 Then there was a giant statue of the president:

In addition, there was a plethora of placards with messages such as “Make America Great Again”, “Impeach Me”, “Climate change is real, your tan is not” and “Free Melania”.

And let’s not forget, the totally adorable giant orange balloon of Mr. Trump as a scowling baby wearing a diaper and clutching a cellphone.

“You are such an arse, I mean you look so dashing in that blindfold. And you are getting warmer, warmer and warmer. Just keep it up as that crown is just waiting to sit a top your head!”

*Led by Donkey is a campaign group whose main campaign consists of billboards containing past statements by pro-Brexit politicians which appear to undermine their political position. Initially run as a guerilla operation for the first few billboards[6], it was then expanded into a crowdfunded campaign that legitimately purchased the advertising space it used.