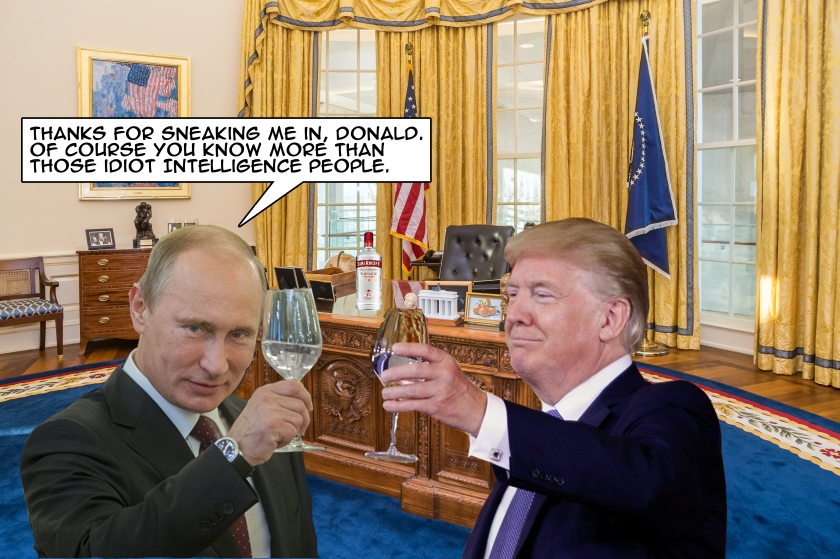 To watch the leaders of our national security team sit before the Senate and literally disavow mostly everything The Don espouses, was one of the most unnerving things we have seen during this presidency. Let’s go through the list:

No, Mr. President ISIS has not been defeated.

Despite your delusional belief that you and North Korean leader, Kim Jong-un, are having an international bromance, North Korea has no intention of denuclearization.

Despite your  insistence that Iran violated the Iran nuclear treaty, Iran is still in compliance with the treaty.

Despite your belief that Putin and Xi Jinping just love, love, love you, the two countries are working together to challenge U.S. leadership in the world, to undermine democratic governments and gain military and technological superiority over the United States. To quote Dan Coats, Director of National Intelligence: “Russia and China are more aligned than at any point since the mid-1950s.”

When a member of the Intelligence committee asked Dan Coats whether our current relationship with Russia represented a security risk, he basically said: “Umm, umm, umm, I’ll meet you in the bathroom behind closed doors to discuss this.“ Obviously, if he thought the answer was “no way José”, he would have just said it. I feel so safe, don’t you?

Let’s face it. The Don’s astonishing news conference in Helsinki back in July 2018, when he sided against his intelligence agencies in favor of Putin’s denial of Russia’s influence in our election, says it all. And I am willing to bet that if you asked The Don today if Russia infiltrated the 2016 election, he would obfuscate and somehow lead us back to the 400 lb. guy on the couch. Remember him?

Revelations that The Don confiscated the notes of the translator from private meetings with Putie and had a secret tryst in Venezuela after their meeting that was supposedly cancelled because of Russia’s actions in the Ukraine, is also astonishing.

According to my sources, the only thing anyone overheard in the meeting was something about “pee tape” and “400 lb. man.”

The only thing more astonishing than The Don’s actions is the inaction of shamefully spineless Republicans whose response is generally, meh?

Douglas H. Wise, a career C.I.A. official and former top deputy at the Defense Intelligence Agency had this to say: “The existential danger to the nation is when the policymaker corrupts the role of the intelligence agencies, which is to provide unbiased and political intelligence to inform policy.”

Not surprisingly, The Don didn’t even watch the hearings as he is way too busy tweeting and really has no patience for a bunch of people talking about the details of national security. So boring. Rumor has it that when asked if he was going to be watching he replied:’’

He probably heard some commentator say: Hey, they are dissing the president, saying stuff that is just wrong. Don’t you think the president should do something about this?

And right on schedule The Don took to Twitter to weigh in.

The Intelligence people seem to be extremely passive and naive when it comes to the dangers of Iran. They are wrong! When I became President Iran was making trouble all over the Middle East, and beyond. Since ending the terrible Iran Nuclear Deal, they are MUCH different, but….

Perhaps Intelligence should go back to school!

And yes, Don you should school them, as you know so much more than they do about what is going on and what represents a security risk to our country.

Day One of National Security School:

The Don: “I’ve summoned you here to talk about our national security. Seems you have a few whacky ideas about Iran, Russia ISIS and North Korea.”

Dan Coats: “Mr. President our intelligence is very detailed on these matters and…”

The Don: “I am glad you are acknowledging that you are wrong and your words were misunderstood.”

The Don: “So let’s talk about what our focus will be on Day One of National Security School.”

“Day one of school will be about “The Wall,” our greatest national security risk.”

“Day Two of school will about, you guessed it, “The Wall.”

“Thanks for coming. I am glad we are all on the same page. I will tweet about how great our meeting was and put everyone at ease. “

“And by the way, we still have some burgers and fries left from when the Clemson football team was here. I used my money to buy it, as I was alone in the White House. No cooks during the shutdown.”

And without missing a beat the Don tweeted:

Just concluded a great meeting with my Intel team in the Oval Office.” They told me that what they said on Tuesday at the Senate Hearing was mis-characterized by the media – and we are very much in agreement on Iran, ISIS, North Korea, etc.,” “Their testimony was distorted press….

I would suggest you read the COMPLETE testimony from Tuesday.” A false narrative is so bad for our Country. I value our intelligence community. Happily, we had a very good meeting, and we are all on the same page!

My favorite phrase of the tweet was “a false narrative is bad for our country.”

Remember that game you used to play when you were a child called the opposite game? You had to say everything that was the opposite of what was happening? Didn’t it make you crazy? And what happens to us when our president plays it with our national security? So my question is that if the National Intelligence people believe there are threats to our national security that the president doesn’t believe and they meet with him and the end result is a tweet from him telling us that “we are all on the same page,” WHAT THE FUCK ARE THEY DOING?

Why aren’t they calling a national emergency press conference to state unequivocally that the real national security risk to the nation is the person presiding in the oval office!

Here’ s the statement they should make:

We come before you today because we have been enlisted to protect the national security of this country. After considerable deliberation we have concluded that the greatest threat to this great country’s national security is The President of The United States and recommend that the congress take immediate action to impeach him before his false narratives and delusional beliefs about himself result in a real emergency that our country’s leader will have no idea how to deal with.

Below is a partial list of what I consider to be our real national security risks:

The undermining of our intelligence communities

Threats to take the U.S. out of NATO.

Cyber threats to the security of our elections and minor things like our electrical grids.

Gunmen in Synagogues and  the rise of Anti-Semitic Speech

Rise in hate rhetoric and embracing White Supremacy as exemplified in Charlottesville and recently evidenced in what happened to black actor Jussie Smollett when two people approached him yelling racial and homophobic slurs. The attackers scratched him up, doused him with bleach and placed a rope around his neck while proclaiming “This is MAGA country.”

Yes, indeed Mr. President we are all feeling so safe under your stewardship. Yes indeed!