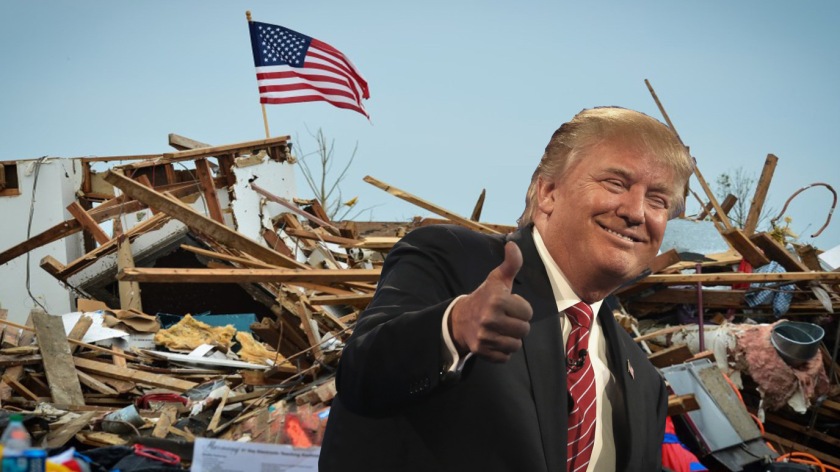 You Ain’t Seen Nothing Yet!

If you thought the first two years of The Don’s kleptocracy were scary and unhinged, hold on to your seats, because you ain’t seen nothing yet.

There is the Mueller investigation closing in (hopefully with an indictment of Don Jr. just around the corner!)

The Don was named person number 1 in the Michael Cohen case where campaign finance laws were broken.

The democratic majority House of Representatives is beginning numerous investigations, including The Don’s brazen violations of the Emoluments Clause.

No to mention the chaotic stock market with the possibility of a recession around the corner-partially due to those easy to win trade wars.

A childish government shutdown, which economically burdens 800,000 federal employees because the big baby in The White House wants his wall.

Are you exhausted yet? 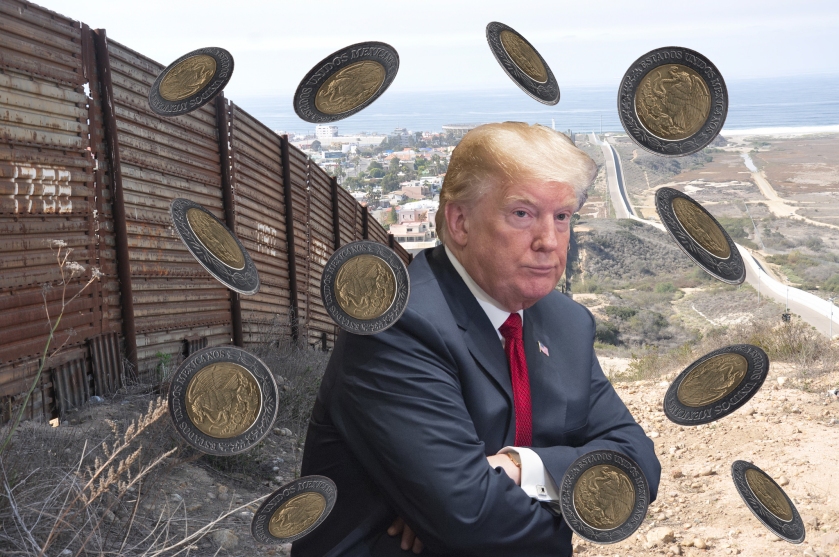 As a result, The Don’s grandiosity and belief that the “A plus” president never loses (aren’t we all so “tired of winning!”) will unleash a torrent of deflection, distraction and vitriol that will be more over the top than ever. As I have mentioned on a number of occasions, The Don’s Malignant Narcissism, which leads to disdain and disregard for anyone but himself, will create a scorched earth policy: he will do anything to survive. It will be crazy and it will be ugly. So hang on.

So what do we as involved citizens do to cope with all the despair and anxiety this will create?

My new year’s resolutions (besides eating less sugar!) are the following:

Do more dancing, singing, and laugh much more.

After seeing the remake of Mary Poppins, I went home and watched the real-deal original and delighted in Ed Wynn’s hysterical antics in “I Love to Laugh.”

In other words, find outlets for yourself in order to release the tension and anxiety. Find ways to get the poison The Don projects on to the world out of your system. Hug your loved ones more. Take up weaving. Run. Climb stairs. Do jumping jacks. Should I venture to say try Yoga, laughing Yoga? When the pressure gets too great just scream. Take pleasure in small things. Hang up pictures of the extraordinary new women and people of color carousing the walls of Congress, who bring energy, hope and inspiration.

Watching the Republican uproar over Alexandria Ocasio-Cortez dancing made me smile. Her response to their outrage of her rooftop dancing in college imitating a scene from the 1980’s movie “The Breakfast Club” was to dance in the hall in front of her congressional office to Edwin Starr’s antiwar anthem “War,” and taunt: “I hear the GOP thinks women dancing are scandalous. “Wait till they find out Congresswomen dance too!” You go girl, as they ain’t seen nothing yet!

Then there was Mike Pence swearing in the new bi-sexual female Senator from Arizona, Kyrsten Sinema. Sinema was very confused because during the swearing in Pence looked very uncomfortable and kept saying: “Mother, where are you?” 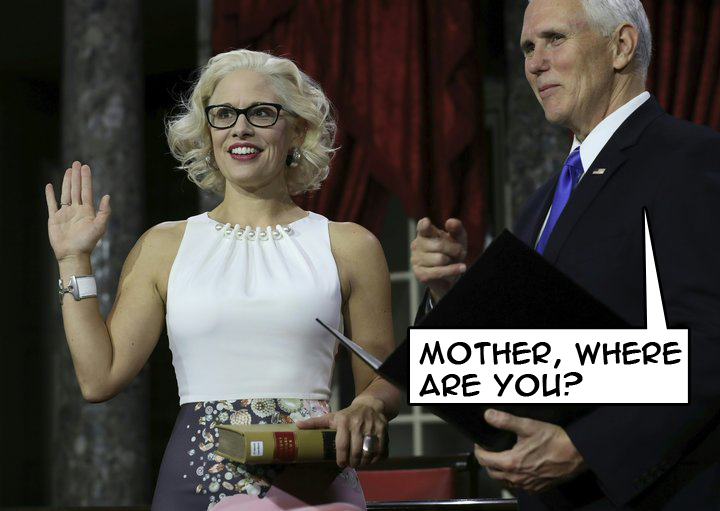 Now that we have a sense of what we need to do to deal with the toxicity, let’s return to the craziness.

In his first cabinet meeting, with his devoted group of sycophants surrounding him, we were ushered in to the new crazy by the presence of the Game of Throne’s-like poster of The Don which said “The Sanctions Are Coming.” This was a play on words from the “Game of Throne’s “The Winter is Coming.” 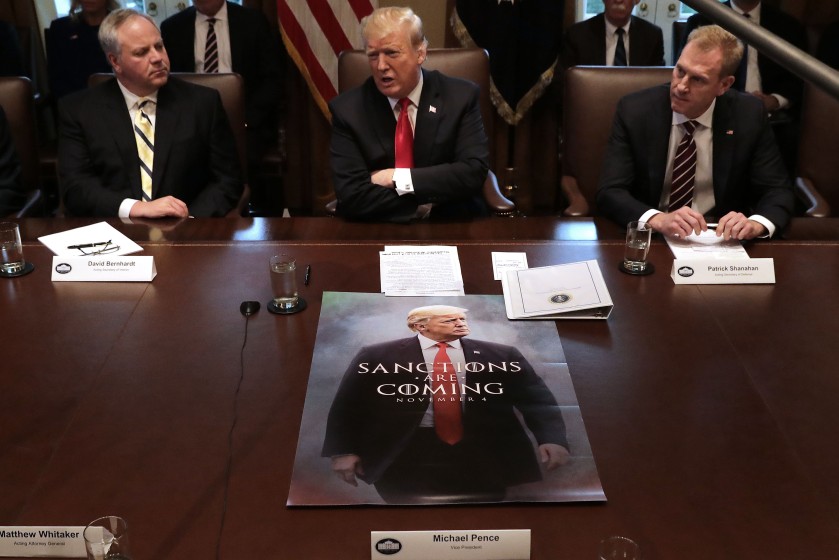 During a 90 minute free association ramble to his cabinet, The Don said some pretty whacky things, so much so, that MSNBC’s Joe Scarborough said The Don’s actions during the meeting were enough to invoke the 25th Amendment

Here are a few of the highlights:

When reflecting on our involvement in Afghanistan he devalued the President of India, Modi, by saying that India’s involvement was pretty much useless and mocked their involvement in building a library, which according to The Don “took about 5 hours.”

Rumor has it that he whispered the following to his new Acting Secretary of Defense.

“Why waste your time building a library. Reading is such a waste of time. Boring, so, so boring! I am sure I have read all those books anyway. I think I have read more books than all of the people in this room combined and frankly it was a total waste of time. Nothing in them I already didn’t know.”

Then he turned to Education Secretary Betsey Devos and said: “Maybe we should take the money we spend on libraries in this country and put it to the wall. Now that’s a brilliant idea, don’t you think?”

Trump went on to lie, lie, and lie by claiming there are more than 30 million undocumented immigrants.

That number is about three times greater than experts’ estimates. Pew Research Center estimated there were 10.7 million undocumented immigrants in the U.S. as of 2016.

In a brazen and craven attempt to create an imaginary crisis, The Don also lied about thousands of terrorists entering the U.S. through the southern border, when there is no evidence of this. Thank you Fox News’ Chris Wallace, for confronting  Sarah “Huckstabee” Sanders attempt to continue promulgate these lies.

He said that because terrorists from Afghanistan attacked Russia, the Russians went to war with Afghanistan. Actually, this is a pretty crazy one as it turns out that The Don is spouting Putin’s new revisionist history about The Soviet Union’s war in Afghanistan. It was Russia who went in to Afghanistan that brought terrorists to their country in reprisal for their invasion.

Then a little free association:

General Bone Spurs at your command.

The Don: “I had a meeting at the Pentagon with lots of generals. They were like from a movie. Better looking than Tom Cruise, & stronger. And I had more generals than I’ve ever seen, & we were at the bottom of this incredible room. I said, ‘this is greatest room I’ve ever seen.'”

Hope to the rescue.

The democrats, led by their fearless general, Nancy Pelosi, have hit the ground running and immediately passed resolutions to re-open the government. Then they plan on passing H.R. 1, known as “For The People Act,” a comprehensive package of revisions to current political practice that House Democrats are looking to introduce in the opening weeks of the next Congress. H.R. 1 will attempt to: establish nationwide automatic voter registration; promote early and online voting; end partisan gerrymandering; expand conflict-of-interest laws; increase oversight of lobbyists; require the disclosure of presidential tax returns; strengthen disclosure of campaign donations; set up a system of small-donor matching funds for congressional candidates; and revive the moribund matching-fund system for presidential campaigns. A plan for repairing the Voting Rights Act will move along a separate track.

Just promise through all the madness to come that you find time to laugh!