First, let me tell you about the gift I received. No, it’s not two tickets to The Don’s holiday party at Mar-a-lago. I would have had to refuse anyway, as I am not cool with the feng shui of Red Christmas trees.

Melania’s crimson conifers were referred to as set pieces for the movie “The Shining” and Hulu’s “The Handmaid’s Tale,” all which add up to a Tim Burton Sequel entitled “The Nightmare Before Christmas: Where Red Trees Dare to Tread.”

My gift was a coffee mug with Robert Mueller on it. The coolest part, is that not only does the outside of the mug have Mueller’s “mug.” but the inside has his “mug” as well. So when you are sipping your morning Joe, Mueller is looking right at you. With Mueller my companion, coffee has now become my elixir of morning sanity. Add that to my “It’s Mueller Time” t-shirt (which I sleep in every night) and I have my daily antidote to the kryptonite known as The Don. 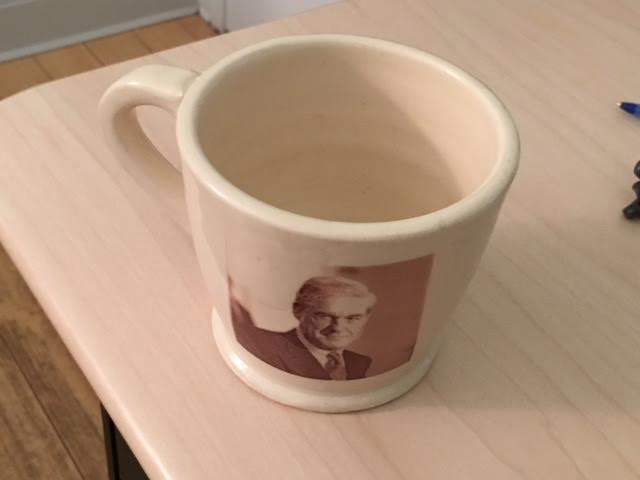 In the poetic parlance of N.Y. Knick Hall of Famer and rhyming master announcer, Walt Clyde Frazier, this week could be referred to as Mueller’s week of dealing and revealing.

In his delusional matrix, The Don’s response was that a big nothing-burger was revealed and was proof that he was exonerated.

Totally clears the President. Thank you!

But as the great Miles Davis has said: “In music, silence is more important than sound.”

First off, Mueller is quite happy with Flynn’s cooperation — happy enough to recommend that he serve no prison time. According to the court document Flynn’s reveal was ““substantial,” and that a “sentence that does not impose a term of incarceration” for him would be “appropriate and warranted.”

As Clyde Frazier might say: “His dealing and revealing did some serious hurting and deserting, slamming and jamming on The Don.”

On the other hand, The Don’s take was rumored to be “ I told you Flynn was a good guy. Even Mueller thinks so, as he isn’t even going to go to jail. And did you see that document: there is nothing in it but a bunch of black lines. There was so little written I even read some of the words. No collusion, illusion. Shame on that lazy idiot Tillerson for saying I don’t read!”

Three different investigations and no jail time! That’s a lot of revealing and dealing on Flynn’s part.

From The Don’s perspective: “They are so confused over there that they can’t decide what to investigate. Total chaos and a bunch of incompetents!”

19 interviews? That’s like three weeks worth of shit that Flynn had to discuss. Can you think of anything you would want to talk to anyone about for three weeks: Perhaps, if it could prevent you from going to prison for a long time?

The Don laughed at the number of interviews: “All I need is 5 seconds with someone and I know all I need to know. My gut tells all. These people are a bunch of idiots!”

Cohen’s documents were from two different sources: The Mueller probe and the Southern District of New York.

The Southern District of New York recommended considerable prison time for Cohen claiming that he, The Don, the Trump Organization and the campaign were all directly involved in an illegal scheme to silence two women (Stormy Daniels and Karen McDougal), who claimed they had affairs with The Don. Prosecutors stated that payments made by Cohen “with the intent to influence the 2016 presidential election” and pursued “in coordination with and at the direction of Individual 1” — that is, Mr. Trump.

The Trump Organization’s reimbursements to Mr. Cohen for payments were fraudulently disguised as legal fees and were approved by senior executives at the organization.  This is definitely a no, no and could lead to charges being brought against The Don and his organization.

The Don’s response to this was to compliment the prosecutors for referring him to as “individual one.” Finally, they got something right, as no doubt I am number 1.”

On the Mueller front, Mueller credited Mr. Cohen with providing “substantial and significant efforts” to assist the investigation. Mueller detailed evidence of collusion with Russia. This includes a previously unreported phone conversation in November 2015 between Mr. Cohen and an unnamed Russian who claimed to be a “trusted person” in Moscow. The Russian explained to Mr. Cohen how the Russian government could provide the Trump campaign with “political synergy” and “synergy on a government level,” and offered to set up a meeting between Mr. Trump, then a candidate for the Republican presidential nomination, and President Vladimir Putin of Russia.

To prove he read parts of the document, The Don extolled the virtues of Mueller for using words like “substantial” and “significant,” to describe him. “Synergy” was also a favorite, as he claimed the energy company had made contributions to his campaign.

The special counsel also focused on Cohen’s contacts with people connected to the White House in 2017 and 2018, implicating the president and others in a conspiracy to obstruct justice or to suborn perjury. Cohen provided invaluable insight into the “preparing and circulating” of his testimony to Congress — and if others, including the president, knew about the false testimony or encouraged it in any way, they would be at substantial legal risk.

Mr. Trump’s legal woes do not end there. The special counsel also advanced the president’s potential exposure under the Foreign Corrupt Practices Act for activities relating to a potential Trump Tower Moscow. The Moscow project was a lucrative business opportunity that actively sought Russian government approval, and that the unnamed Russian told Mr. Cohen that there was “no bigger warranty in any project than the consent” of Mr. Putin.

Also, Mr. Cohen floated the idea of giving Mr. Putin a $50 million luxury apartment in a future Trump Tower Moscow. If proved true, both the president and his company could face substantial jeopardy.

As for Manafort, some of the lies that the special counsel spells out in the redacted memorandum appear to implicate the president and those close to him in possible collusion and obstruction crimes. Notably, Mr. Manafort is accused of lying to the special counsel regarding his contacts with the Trump administration. It is possible the two were in contact about a possible pardon. In other words, you stay loyal to me and I’ll take care of you.

So now that we know what was not redacted, let’s turn to what was. The Mueller reveal was just an appetizer to show us that there is significant information implicating the president. Expect more indictments and more proof that debunks The Don’s no collusion, illusion.

In fact, I believe, when all is said and done, there will be conclusive evidence that The Don committed criminal campaign finance fraud, criminal money laundering with Russia (maybe Saudi Arabia as well), obstruction of justice, conspiracy to collude with Russia to impact the election and numerous violations of the Emoluments clause.

What the great unveil of the redacted material will ultimately reveal can be summarized very simply: Don, the jig is up and you are fucked!

Whether that will lead to his removal from office is doubtful, as the spineless Republicans will have to change their tune. We may have to wait for 2020 and let the people speak like they did during the midterms.

*Here are some of Frazier’s best to go along with our dealing and revealing: