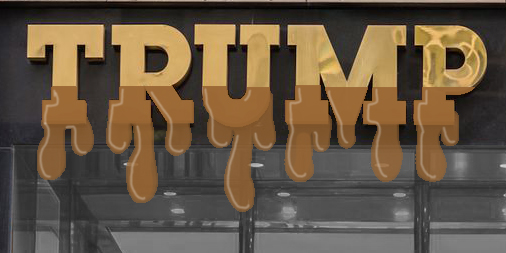 Let’s face it. The Don has had a bad few weeks since the midterms. The man, whose entire identity is defined by his brand, and who is a big ‘nothing burger’ without it, has been watching the luster of his name get more and more sullied- going from glittering gold to, let’s say, shit-stained brown.

As the results of the midterms continue to trickle in and more and more seats turn blue, The Don’s inane flouting of victory (only The Don would celebrate the prowess of his impact when the Republicans lost the House!) has turned to sulking and sour grapes. Of course, his inability to tolerate losing, had him reading off the names of the vanquished Republicans like he was reciting the list of the dead after a tragic shooting. If they had only hugged him more tightly, he would have, by sheer force of his personality, brought them home to the finish line. What he can’t comprehend is that because these candidates hugged him during the first two years, no matter how hard they tried to disentangle themselves from him, they couldn’t. His stained remained like a recalcitrant spill of olive oil on shirt. 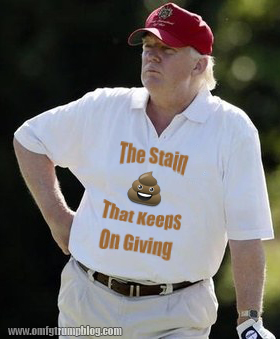 And when the Senate went Democrat in Arizona and the Florida race was heading for a recount, The Don did what he does best: he sowed discord and created a maelstrom of deceit by decrying voter fraud. He did his best to undermine and stain the democratic process once again.

His sulking continued in Paris where he was to commemorate the 100th anniversary of WWI with leaders from around the world. But something funny happened on the way to the cemetery: he didn’t show up. Supposedly, the weather was bad and the joke was he didn’t want to muss up his hair. Me thinks that beside Putin, who continues to spin him like a top, leaders have decided that flattery will ultimately get you nowhere and that his bluster and luster were no longer something of interest.

The worst thing you can do to a raging narcissist is to ignore, not adore them. My sense is that The Don felt slighted and blew off the event because he wasn’t feeling the love. His stain had crossed the Atlantic.

Rumor had it that he locked himself in his hotel room and watched Fox News all day replenishing the love bucket. That when The Don’s decision to miss the event was questioned by his staff, he quipped: “It’s ridiculous to honor dead soldiers. Remember when I said John McCain wasn’t a hero because he was captured? People loved that! Well I like my soldiers alive, not dead!”

With the Mueller investigation closing in and rumors of new indictments running wild, The Don’s choice for Attorney General, Mat Whitaker, has also been under increasing attack.

The Don’s choice of Mat Whitaker is a perfect example of the narcissistic delusional world he inhabits. How do you place a completely unqualified individual, bypassing constitutional protocol, who has made statements disavowing the very investigation he is required to protect, without imagining some would scream “obstruction of justice?” You can when you have gotten away with this sort of shenanigans all your life. You can when you have done so many illegal and awful things and never had to pay the price for your actions. When you believe that you are beyond reproach and being unfairly maligned because you are the greatest person to walk the face of the earth. You can when you are desperate to rid yourself from the growing stain enveloping you.

And what a lovely irony that the man you chose to remove the stains of your transgressions is a man who was on the board of a company that has been sued for $27 million dollars for defrauding customers and is under an FBI investigation for its actions. And that his man’s claim to fame in his work for “World Patent Marketing” who in November 2014 touted its new product the “MASCULINE TOILET,” which boasted a specially designed bowl to help “well-endowed men” avoid unwanted contact with porcelain or water. It’s revolutionary feature was framed like this: “The average male genitalia is between 5” and 6””, the firm’s press release said. “However, this invention is designed for those of us who measure longer than that.”

All I can say Don is that you have come a long way from your golden toilet bowl in Trump Towers. Seems now, no matter how many times you flush, the stain remains. And given your “small hands” and all that suggests, you wouldn’t need one of those Masculine toilets anyway! But really, You can’t make this shit up!