Now that the Kavanaugh debacle is done- and millions of Americans are traumatized by the confirmation process- we can turn our attention to the terror of the Midterm elections.

Let’s hope and pray that people come out to vote (I beg you, Millennials!) and the Democrats at least take back the House to provide a check on The Don. If you have been disturbed and frightened by the first two years: his assault on the F.B.I. and the rule of law, his meddling with the Federal Reserve Board, his denigration of people of color, his devaluing of women, his relentless attacks on the press, his complete disregard for the science of climate change, his belittling, antagonistic rhetoric toward our allies, his brazen support for brutal dictators and strong men, and his unabashed use of the presidency for financial gain, then wait till his second act if the Republicans sustain their hold on the House and the Senate.

If it isn’t clear to you yet that Republican legislators have completely abdicated their responsibility to provide a check on presidential power and live in fear of The Don, then you are living in a dream world.

With the taste of the red meat victory of the Kavanaugh confirmation still fresh, The Don has decided to take his show on the road in belief that he alone can bring a red wave home in the elections. As always, it is all about The Don: in his warped narcissistic world the candidates running for office are just extensions of him.

In a manic frenzy of self-indulgent media glory, The Don is pumping up the base and has them frothing at the mouth, leading them in nightly chants of “lock her up.”

No longer satisfied with using Hillary Clinton as their foil, it seems the mere mention of a women who The Don maligns gets the honor. Recently Christine Blasey Ford and Nancy Pelosi have been featured. Who’s next? My money is on Alexandria Ocasio-Cortez the dangerous socialist who wants to destroy our country. With her you get three in one: A woman, a person of color and an angry, dangerous socialist. The crowd will need to sing numerous verses to do justice to her many transgressions.

The Don’s rallies are part carnival, part rock concert. People flock from everywhere like “Deadheads,” looking to be transformed in to a hallucinogenic feel-good trance. There is great comfort there. Individual fragility is transcended and the participants are transported in to a malevolent mob where white supremacy rules.

The crowd is a sea of red. MAGA hats are everywhere. Those without hats buy them on site. About $15,000 worth was sold at the Springfield rally, one $25 MAGA hat at a time. That is money pumped back into the Trump campaign’s sizable coffers. 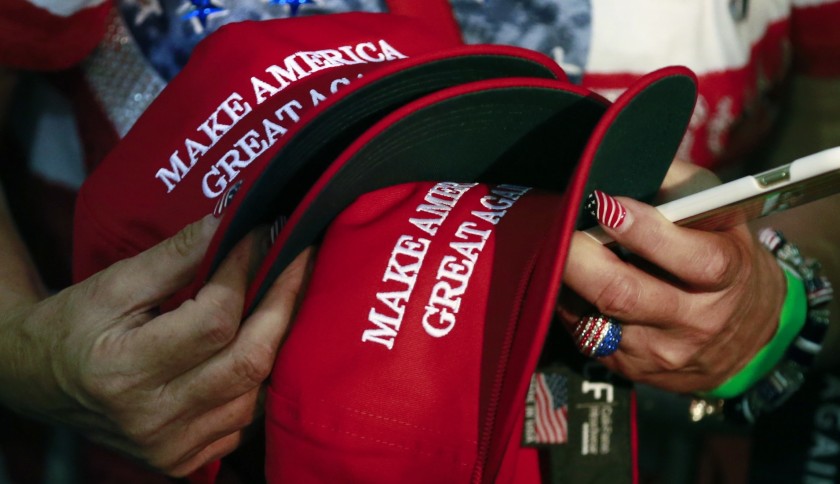 Lies are ubiquitous as The Don recycles his greatest hits to raucous applause. Here are a few of his favorite falsehoods about the Democrats:

“The Democrat agenda is radical socialism and open borders. The new platform of the Democrat Party is to abolish ICE.”

His comments on Medicare and pre-existing conditions are classic Don: project your beliefs on to the other guy with such fervor that the unquestioning Kool-Aide drinkers believe it.

His newest trope is to rant that the Democrats are a crazy angry mob, despite the fact that he has condoned and encouraged violence during his rallies.

When The Don shows up to a rally to support a candidate it is a platform for him to sing his own praises- the local candidate is like an extra in a B movie. He rambles extemporaneously working the crowd drawing them in to his orbit and feels the love. It wouldn’t be surprising to me if didn’t know the name of the candidate he is endorsing until someone whispers his name in his ear before he goes on stage.

There are rumors in the West Wing that The Don had a tantrum when his proposal to make him the candidate in every race was not endorsed. “Makes no sense to me as I’m all the people care about so I should be on all the ballots!” After all, he is the reason someone will emerge victoriously; and in races the Republican candidate is trailing, he will bring the party across the finish line.

The Don dons his “I can shoot someone on 5th Ave” moment as a badge of honor and his cozying up with strong men has now given us our first enactment by association. The Don and Jared’s admiration and love fest with the Saudi Arabian Prince has enabled this authoritarian to believe he could have 15 thugs waltz in to the Saudi Arabian Embassy in Turkey and torture and murder a reporter. His faux response of outrage is made ridiculous by his comment that he will not dispense with the weapons contracts he negotiated with the Saudis. Why should we be surprised?

And given The Don’s propensity for using the presidency as a money making opportunity to enrich himself, who knows what kind of personal deals he and Jared have made with the prince known as M.B.S.

And given this despot wannabe’s undermining of the press as Fake News and his distaste for the rule of law, would it be surprising to see him come out at a rally after a successful Republican Midterm election and after a chorus of “lock her up,” smile and say: “You really have to think about this. Everyone is so up in arms about the journalist killed by the Saudi’s but when you are writing Fake News you never know what can happen to you. Just saying, you never know.”

Go out and vote as we need a blue wave!