Who says you can’t get a man with gun? Well, at least, that was the sentiment in Irving Berlin’s “Annie Get Your Gun,” a broadway musical about Annie Oakley, the female sharpshooter, who was featured in “Buffalo Bill’s Wild West.” There were so many great songs in that show. It would be fun to morph some of them in to today’s insane world of The Don:

“There’s No Business Like Show Business,” or: “Entertaining The Base.”

“Doin What Comes Naturally,” or: “Lying All The Time.”

Which brings us to the protagonist of this piece, Maria Butina, a 29-year-old Russian national gun activist with long-running ties to the NRA, who worked for Alexander Torshin, a high-level Russian government and banking official from President Putin’s party.

According to the court documents, under Torshin’s direction, “the covert influence campaign involved substantial planning, international coordination, and preparation.” Evidence was also gathered by the FBI on Butina’s connections to a Russian intelligence agency and Russian oligarchs. One of those billionaire oligarchs, Konstantin Nikolaev, helped fund her exploits; coincidentally, his son, Andrey, volunteered on the The Don’s campaign. Umm?

Butina, who was a graduate student at American University (my guess she majored in international affairs!) until spring 2017, began traveling to the United States in 2014 and operated as a “covert Russian agent,” according to an FBI affidavit. She acted as an unregistered foreign agent and participated in a multiyear conspiracy to infiltrate conservative political groups including the NRA, in order to “advance the interests of the Russian Federation.”

For all of you who watched the acclaimed TV show “The Americans,” Butina comes right out of central casting. She would have been Kerri Russell’s bestest GF on the show. Can’t you just see the two of them meeting clandestinely in some abandoned warehouse, debriefing after a challenging day of spying, Butina wide eyed as Kerri described her most recent assassination. Like Butina, Kerri knew her way around a gun and was known to seduce a man or two to get what she needed for Mother Russia.

To be honest, until the 2016 election, “The Americans” was one of my favorite shows. But as the madness of the Russia investigation developed, my interest waned because it felt like I was watching the “real deal” on a daily basis. In other words, the fictionalized TV show was no match for the real drama unfolding.

Though the show has ended, (I did watch the last episode!), let’s pretend what follows is the storyboard for an episode in a contemporary remake.

Scene 2: In the oldest ploy in the book Butina gets Erickson to ‘help her with her homework.’ According to emails discovered by the F.B.I. Butina would routinely ask Erickson to help complete her academic assignments, by editing papers and answering exam questions, while she attending American University, her cover while she continued to work on behalf of the Russian Official.

Scene 3: Butina seduces Erickson by sexting photos of herself in alluring poses while sporting an AK 47 stating that the next time they meet she is going to “blow his mind.”

Scene 4: After finishing her assignment late one night, she speaks of her love, love, love for the NRA and the powerful place it plays in the Republican Party. She laments that in Russia, private citizens are nyet allowed to carry guns; she is so impressed that in the U.S the NRA is the largest sponsor of the elections to the US congress. Butina then slowly strips naked and Erikson moaning uncontrollably promises to get her access to the most important people. His exact words: “Baby, you are blowing my mind. I’ll do anything for you. I have access to power.”

How are we doing so far? Think the show’s creators are pleased, intrigued?

Scene 6: Enter Torshin, her Russian connection to high places in the Kremlin. They decide to go on a road trip together to an NRA convention in Nashville. (Road trips are just so much fun!) Butina is particularly excited about this convention (she has been to others) because her love of guns has made her a great fan of country music. There, Butina and Torshin meet the Governor of Wisconsin, Scott Walker. Between the high of the convention and hoe downing every evening at local music joints, Butina is having the time of her life. She posts photos of herself with Republican politicians, including former presidential candidates Scott Walker and Bobby Jindal, and former U.S. Sen. Rick Santorum on her Facebook page (true.) Her buddy Torshin, even has a friendly exchange with The Don (true!)

Scene 7: When the two return to Washington, they meet clandestinely with a high level Russian operative who praises their work and offers a personal message from Putin extolling her as a national hero.

Scene 8: Butina and Torshin attend the NRA convention in Louisville, Kentucky. Torshin meets Donald Trump Jr. during a private dinner (true). Butina is jealous and decides she is going to meet Don Jr. as well (true.) They do some small talk about their favorite guns. Butina turns on the charm and it is clear that Don Jr. is turned on. Butina, who in her time in America has become a huge fan of the iconic and bawdy Mae West uses one of her most famous lines: “Is that a gun in your pocket, or are you just glad to see me?”

Don Jr. can’t take the heat and excuses himself; he heads to the bathroom to protect himself from doing something he may regret. All he needs is his version of the “pee tape” to be used as blackmail. That’s one mistake his father made that he will not. It takes a while before the gun in his pocket has returned to safety position. After splashing his face with cold water, he looks in to the mirror and says: “I am not my father, I am not my father.”

When he returns to the table Butina is gone.

Scene 9: She is off to meet Jim Liberatore, CEO, of the “Outdoor Channel,” who slips her an envelope. With a big smile on her face, Butina opens it and counts out $5,000, which is her monthly allowance from the publisher.  One certainly wonders how she is “blowing his mind?”

Scene 10: Cut to a flashback of Liberatore and other NRA leaders at a meeting in Moscow with Butina by his side. While in Russia, the group, which included former Milwaukee County Sheriff David Clarke and top NRA donors and executives, meet with Dmitry Rogozin, the deputy prime minister, who had been sanctioned by the Obama administration after Russia’s invasion of Crimea. The delegation also visited the Orsis gun factory, which manufactures a high-end sniper rifle used by Russian troops that the Pentagon has expressed concerns about.

Coincidentally, turns out Mike Flynn, the former National Security Advisor, who has pleaded guilty in the Mueller investigation, was in Moscow at the same time. In fact, there are photos of him sitting next to Putin at a function honoring the 10th anniversary of RT (Russian TV), aka Putin TV. 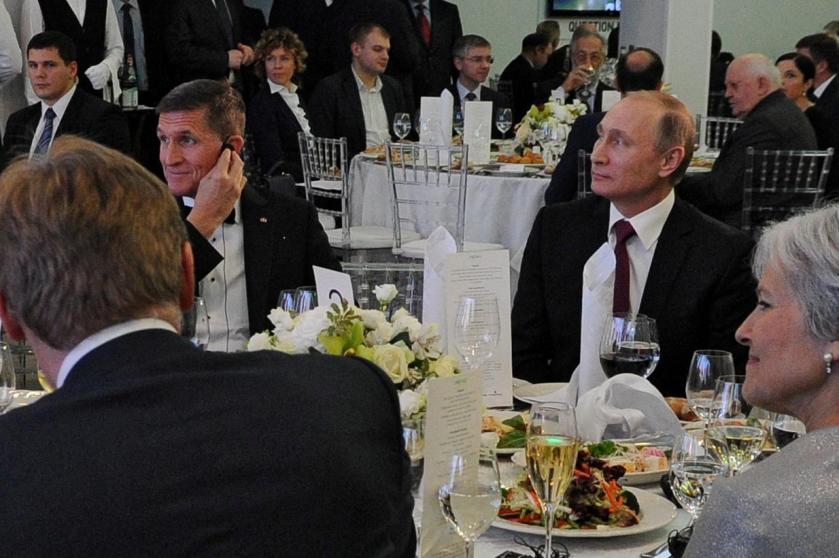 In true RT style, they claim Putin has no idea who Flynn is. What are the chances that Vlad is sitting at a table and doesn’t know someone? Probably just another one of The Don’s coffee boys.

Scene 11: Butina in Washington restaurant with George O’Neill Jr., an heir to the Rockefeller fortune and a conservative opinion writer. O’Neill is believed to have helped build a secret line of communication between the U.S. right wing behind The Don’s campaign, and the Russian government. Butina flirts with him and then uses that old ploy: “Can you come over tomorrow night and help me with my homework?” Another mind blowing international affair, in which she gets an A. (This is true except for the homework part!)

Scene 12: Erikson is calls her desperately from his cell phone at a local tavern in South Dakota. He hasn’t heard from Butina in a few days and wants to know if she wants help with her homework. Butina tells him she has another helper. Erickson takes out his homework helper pen and on a moist cocktail napkin scribbles. “She played me. She played me. She played me.”

Scene 13: Cut to offices of F.B.I. Camera zooms in on fat folder titled: Russia and the funneling of money through the NRA to the Trump campaign: The NRA’s effort to sabotage American democracy with the assistance of a foreign power. 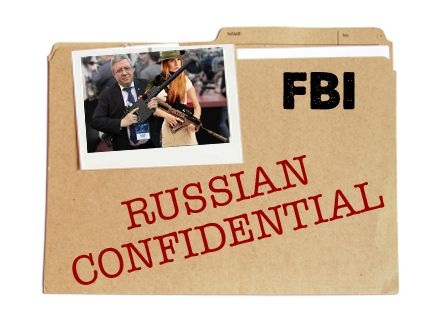 Final Scene: Long shot of White House and camera slowly moves in to find The Don in his bedroom. Phone rings. It is Butina. “I need some help with my homework.” Fade out.

P.S. Butina sits in jail and will not be released because she is a serious flight risk. Russia is using a social media campaign to free her.

Butina has offered to cooperate in a fraud investigation being mounted by federal prosecutors in South Dakota that appears to target Paul Erickson, according to a letter released by her lawyer. Ouch! Now that is one spurned homework helper!