Where to begin? This has been a bad few weeks for the idea of America–the idea that we protect all people equally and take care of those less fortunate. When America embraces these ideals (and we often fall short!), we lead the world by example–as Lincoln famously said: “We follow “‘the better angels of our nature’ “.

These days angels are scarce and The Don, like any effective devil, seduces his flock into believing he is their greatest champion, while he undermines the very foundation on which they stand. He dupes them in to believing he cares. He makes his followers laugh. He makes them feel special. He cajoles them in to following him, promising to deliver them to some imagined place of American exceptionalism. But in reality, he laughs at them behind their back, all the while stealing their soul.

We watch with incredulousness as The Don leads us further and further into dark spaces. Now with his choice of Brett Kavanaugh for the Supreme Court, he has created the opportunity to undo laws that protect voting rights, opening the floodgates to unlimited political spending, undermining women’s reproductive freedom and further destroying public-sector labor unions’ ability to stand up for the interests of workers. Who gets hurt in this new world order? Women, people of color and the working class. And who wins? The religious right (reproductive rights), a Republican party who more and more wears its racist ideology on its sleeve (undermining voting rights) and corporate greed.

Incredibly, in 2018, we are concerned that judges do not support Brown vs The Board of Education, the landmark ruling of the Supreme Court in 1954, which integrated schools, giving black children the same educational opportunities as whites.

Not only are reproductive rights and Roe vs. Wade under assault but The Don has looked America in the eye and laughed at the Me Too movement. At a recently rally in Montana, he ridiculed Elizabeth Warren, who he derisively refers to her as Pocahontas, suggesting he would toss a DNA test on stage in a debate to make her prove the validity of her claim that she is part Native American; but being the gentleman that he is, he would toss it gently because of the Me Too movement and all that ridiculous stuff.

What else should we expect from a shameless and brazen sexual predator who supported a child molester and defended a wife beater in his administration?

So we should not be surprised that he has appointed Bill Shine, former Fox News executive to head up his communication department, even though Shine was named in multiple lawsuits or allegations related to sexual harassment or racial discrimination at Fox News. An on-air contributor Julie Roginsky alleged that Shine retaliated against her for not backing Ailes in his battle against Gretchen Carlson, who sued Fox News. Shine was known as Ailes’s “fixer”.

Now that Michael Cohen is no longer The Don’s fixer (let’s hope and pray he fixes The Don this time!), someone had to take his place. After all, Gangsters and Mafia guys need other people to do their dirty work.

The man who has more respect for women than anyone, has basically said Fuck Off to women.

The Don has also said Fuck Off to children. Between the pernicious and heartbreaking separation of children from parents at the border, his budget that plans to cut the Children’s Health Insurance Program by at least 20% over the next two fiscal years and slash Medicaid, which covers millions more children, his wish to end or cut SNAP (formerly food stamp) benefits for a substantial number of households with children,

And as for the sucking, The Don (who once referred to a lawyer needing to breastfeed during a court hearing as “disgusting”) and his administration have also taken on breastfeeding. At a recent World Health Organization meeting, the American delegates wanted to ditch language that called on governments to “protect, promote, and support breastfeeding” and another passage that called on policymakers to restrict the promotion of unhealthy food products. When that didn’t work, they threatened Ecuador, the country that intended to introduce the breastfeeding measure, with punitive trade and aid measures. The bully administration threatens Ecuador and demands silence! Ultimately, it was Russia that agreed to introduce the breastfeeding resolution, and the U.S.’s efforts were thwarted. Thank you Russia! The world’s babies thank you!

What could prompt the U.S. to work against the promotion of breastfeeding when he American Academy of Pediatrics (AAP) and the American College of Obstetricians and Gynecologists, strongly recommend it exclusively for the first 6 months of an infant’s life?

Well, first why should this administration that doesn’t believe in climate change and generally is antagonistic to science, care what the AMA says.

Most importantly, this is about protecting the profits of companies that produce formula. Public health has no place in this administration as we can witness by deregulation of environmental policies and the egregious gutting of essential components of Obamacare, which leaves millions more Americans without health insurance.

Speaking of babies, the Brits know one when they see one. The now iconic Trump Baby Blimp, diapers and all, is a sensation in London and hovered over the city like an orange sumo wrestler during The Don’s visit. According to YouGov’s polling, 11 percent of Britons believe Trump is a great or good president. But 67 percent, a vast majority, believe he is a poor or terrible president. Unlike 40% of Americans, the Brits have it right as they realize that this is one baby to say Fuck Off to. 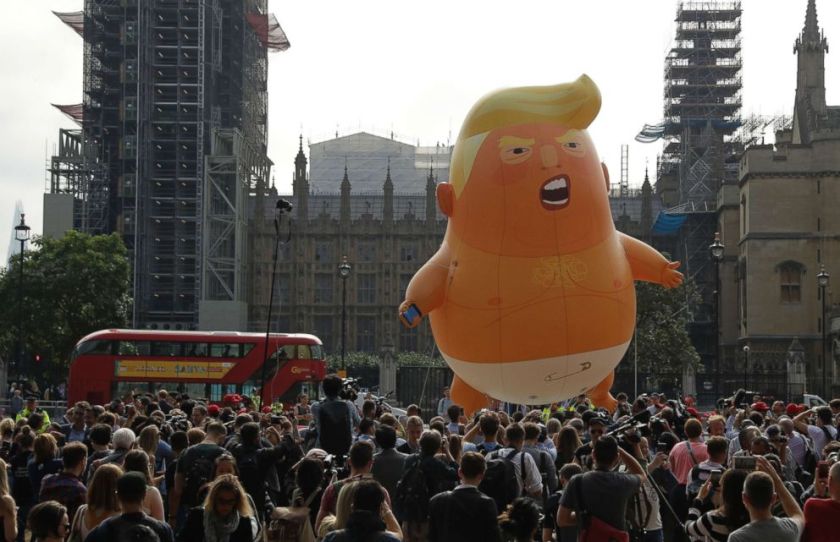