Yeah, the strong gets more
While the weak ones fade
Empty pockets don’t
Ever make the grade

Money, you’ve got lots of friends
Crowdin’ round the door
When its gone and
Spendin’ ends
They don’t come no more

crust of bread and such

You can help yourself

But don’t take too much

But God bless the child that’s got his own.

If you recall, Mr. Magoo, The Don’s term of endearment for Mr. Sessions, was the cartoon character that was practically blind and screwed things up because he couldn’t see straight. I take offense at The Don’s infantile name calling, but Mr. Magoo seems the perfect moniker for Sessions, as he recklessly plows through the norms of human morality and decency.

However, looked at through another lens, Session is seeing very clearly and is just carrying out the same racist policies he always has toward people of color. Yes, this is about immigration, but I wonder if they would be taking babies away from people seeking asylum from Norway, where The Don wishes more immigrants came from. The fact that Sessions has to defend comparisons between what former first Lady, Laura Bush, referred to as “internment camps” and what the nazis did to the the Jews, tells us how far away we are from normal.

The despicable irony of it all, is Sessions use of Romans 13 to defend “law and order,” when his boss has committed so many criminal acts  throughout his life and has consistently showed no concern for the ‘rule of law.” (The most recent discovery of his transgressions, his use of funds form his “so called charity” for personal use!)

To quote Peter Navarro, The Don’s economic advisor: “There should be a special place in hell for” Sessions. (This comment was made about Canadian Prime Minister Justin Trudeau.)

Let’s look at Sessions comment about Roman’s 13 and see how it justifies tearing children away from their parents.

“I would cite you to the Apostle Paul and his clear and wise command in Romans 13, to obey the laws of the government because God has ordained the government for his purposes,” Sessions said during a speech to law enforcement officers in Fort Wayne, Ind. “Orderly and lawful processes are good in themselves. Consistent and fair application of the law is in itself a good and moral thing, and that protects the weak and protects the lawful.”

Romans 13 has been invoked at other times, most notably in the 1840s and 1850s, when it was used by defenders of the South or defenders of slavery to ward off abolitionists. This is the same argument that Southern slaveholders and the advocates of a Southern way of life made.

The Migrant and Refugees section of Vatican responded with:

“The Bible teaches that God ‘loves the foreigner residing among you, giving them food and clothing. And you are to love those who are foreigners, for you yourselves were foreigners in Egypt’ (Deuteronomy 10:18-19).” Pope Francis.

The U.S. Conference of Catholic Bishops strongly condemned the administration’s immigration policies as immoral, with one bishop stating that Catholics who help carry out the Justice Department’s policies are violating their faith and perhaps should be denied Communion.

And where do the Evangelicals stand on this moral atrocity? In general, 75% of Evangelical women and 81% of men have prayed to the alter of The Don. After all, many of these people backed Roy Moore, a known pedophile. So once again, these people who claim Jesus as their savior, are  faced with another gut check: How far astray from Jesus’s teachings will your flock go? Does your hypocrisy know no bounds? Judgment day waits!

No mention of hypocrisy would be complete without Mike Pence, the highest profile Evangelical. Standing side by side with The Don, the empty soulless smile of a programed puppet. Jesus would be proud!

And then we have the evil sisters commentators,  Laura Ingraham and Ann Coulter comparing the detention centers to”summer camp” and creating craven lies that photographs of distressed children are child actors. Coulter is the same one who claimed the students speaking about about the Parkland shooters were actors as well. As Peter Navarro said: “There is a special place in hell”  for people like you.

Of course, we can always count on Sarah “Huckster” Huckabee for her ethics and morality. Here’s what she said to a reporter who confronted her about what was going on:

“I can say that it is very biblical to enforce the law. That is actually repeated a number of times throughout the Bible,” she said. “It’s a moral policy to follow and enforce the law.”

As Peter Navarro said: “There is a special place in hell” for people who have lost their soul to the devil.

And speaking of the devil, there is The Don once again smugly lying and saying that he had no choice but to enact this policy as he was just enforcing the laws the democrats created. Total hogwash!

The fact is that separating children from families (more than 2,000 from mid-April through May alone) has nothing to do with a law and everything to do with a wall. The Don is a craven man with no soul. He has no empathy for children, as they can’t give him anything; the smile or a hug from a child leaves him cold. The fact that abruptly separating a child from his family causes deep psychological trauma is of no concern to him.* For The Don everything is transactional and about what he can get from someone. And now, The Don has finally figured out what he can get out of children, how he can use them to his benefit. He can extort their pain to get money for his wall. He can use their tears to mix the cement. As Peter Navarro said: “There is a special place in hell” for him.

Parents are traumatized too:

A Honduran father separated from his wife and child suffered a breakdown at a Texas jail and killed himself in a padded cell last month.

I wonder how these parents and their children would feel? 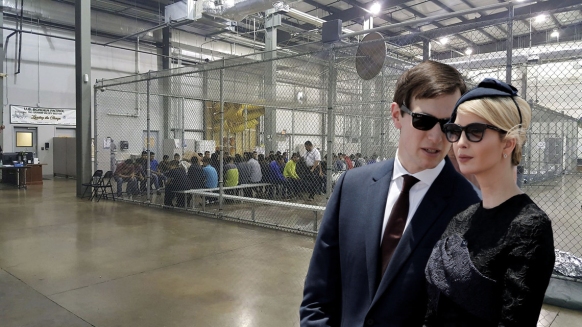