I never thought I would get to talk basketball in my writings about The Don. Golf, of course, hoops, nah. With the N.B.A. playoffs in full swing it seems like the perfect moment. Will we see a rematch between Lebron James (and some other people) and the high octane Golden State Warriors?

On at least one occasion, I have been able to weave in baseball, recalling The Don’s claim that when he was in high school, he was the best baseball player in New York. In his inimitable grandiosity, he was touting himself as someone Mickey Mantle and Yogi Berra, two Hall of Famers and iconic baseball superstars, should envy.

But let’s get back to basketball. I grew up in New York City playing B Ball, also referred to as hoops. Depending on how many of us showed up to the local playground, we either ran full-court, or played three on three half-court. We had those of us who shaked and baked, took bank shots and slam dunked, who were one on one players, looking to put the ball in the hole and then we had the more egalitarian types, who were looking to pass the pill and let others score. I was more of the latter. Anyone could score, but to me, there was nothing like a great pass. One of the classic ways to do this was with the Pick and Roll. Simply put, in a pick and roll you create interference for your teammate, which allows them to be freed up to get an open, easy shot. There is also behind the back and deceptive no-look passes that dazzle: numerous ways to create scoring opportunities for teammates.

So where am I going with this, you ask? Bear with me, as I try to summarize a complex web of political intrigue and money exchange or in the parlance of hoops: pick and rolls, behind the back channel and deceptive no look passes in an international hoops game of dreams.

And our round ball game includes some of our favorite players: Jared Kushner, Carter Page, Mike Flynn, Steve Bannon, Russian Ambassador Kysliak and even the Steele Dossier.

It begins with a basketball league, called Big 3. It’s a three-on-three league featuring a number of former NBA stars that begins its second season next month. The rapper and film star Ice Cube is co-CEO of the league, along with his longtime business partner Jeff Kwatinetz.

Recently, Ice Cube and Kwatinetz filed a law suit because Ahmed Al Rumaihi, who runs a billion dollar Qatari investment firm reneged on an investment in the league, promising near 20 million and only delivering 7 million.

Besides suing for the money, Ice Cube and Kwatinetz filed a separate affidavit claiming the investment was an attempt to procure influence in the U.S. for the Qatari government. An international “pick and roll.”

Prior to working with Big3, Kwatinetz ran a business with Steve Bannon as the CFO.

The affidavit states that Al-Rumaihi asked Kwatinetz to “tell Steve Bannon that Qatar would underwrite all of his political efforts in return for his support.”

Kwatinetz refused and said Bannon would never be part of his behind the back (channel) ‘underwriting” activity.

According to the affidavit “Mr. Al-Rumaihi told Kwatinetz that he “shouldn’t be naive, that so many Washington politicians take our money, and stated ‘do you think [Michael] Flynn turned down our money?’”

Back-tracking to May of 2017, tensions in the Persian Gulf spiked as Qatar was blockaded by Saudi Arabia and The Emirates. President Trump weighed in against Qatar in tweets shortly after the blockade began. He tweeted:

“During my recent trip to the Middle East I stated that there can no longer be funding of Radical Ideology. Leaders pointed to Qatar – look!”

Coincidently, The Don’s railing against Qatar began one month after a Qatari fund declined a 500 million dollar investment in Jared Kushner’s family real estate business. Think Kushner was mad? Some suggest that he may have orchestrated a foreign policy crisis to bail him out from defaulting on a billion dollar payment due on his 666 Manhattan building. And guess what, months later a firm linked to Qatar gave him a $184 million loan, triple the size of the average property loan made by the firm. Not too long after this back channel pass, The Don softened his approach to Qatar. What a pick and roll followed by a bank shot.

Now on to the Russia/Qatar connection, as it seems all roads lead to Russia.

Russia’s sale of Rosneft Gas is the key event in the Steele Dossier’s quid pro quo allegation. The Steele dossier alleges that Russians made a deal with Carter Page in the summer of 2016 to sell 19 percent of fossil fuel giant Rosneft, and secretly transfer (no-look pass) benefits to Trump officials.

Weeks after the election and just eight days before this oil megadeal on December 9, 2016, Flynn and Kushner met Russian Ambassador Sergey Kislyak at Trump Tower, and Kushner proposed a secret communication link with the Kremlin through the Russian embassy. Also, just before the sale, Kushner had a meeting with Putin’s banker and confidant Gorkov.

Immediately after the deal, a Qatari diplomat allegedly met with Cohen and Flynn at Trump Tower. And what a coincidence, as eventually it was revealed that Russia’s oil deal was with, you guessed it, Qatar!

All of these events suggest how Russia might have delivered a possible quid—a potential payment from a huge oil sale through behind the back channels—in return for a Trump administration quo—a reported promise of reduced sanctions.

So let’s run a couple of plays.

Qatar passes to the Big3 who claim they were fouled by Qatar.

Saudi Arabia and Kushner set a pick and roll on Qatar because Qatar didn’t pass (500 million) to Jared.

Qatar then runs a new no-look play that gets Kushner $180 million.

Kushner tries to throw a behind the back channel pass to Kislyak who wants to use profits of the sale of 19% of Roseneft to get the U.S. to drop sanctions on Russia.

If you have ever had the pleasure of watching the Harlem Globetrotters play hoops, you are delighted by the trickery and deception they bring to the game.

But our fab five: Flynn, Kushner, Page, Cohen and maybe The Don himself, will hopefully delight us all by playing their crooked, deceptive brand of hoops in prison. On the positive side, they have a lot of experiencing playing together and know how to pass and create opportunities to score. 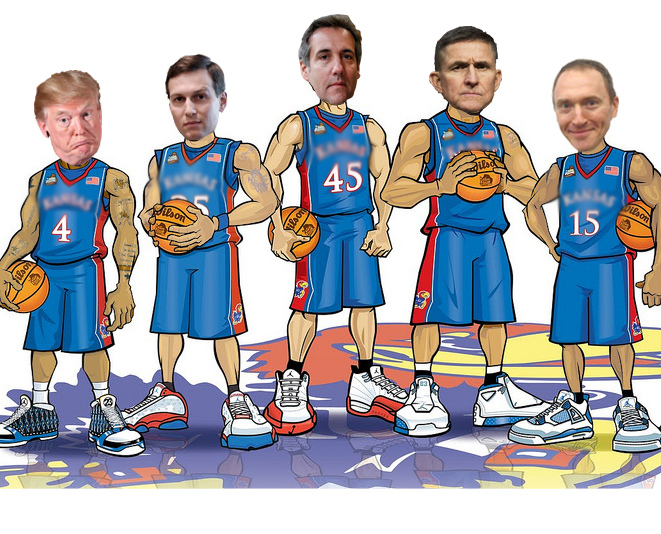