Before and then after he became president, Mr. Trump attacked tech firms, military contractors, carmakers, cellphone companies, financial firms, drug companies, air-conditioner makers, sports leagues, and many Wall Street giants. Some of his favorite targets have been media companies, which he has labeled “shameful,” “dishonest,” “true garbage,” “really dumb,” “phony,” and “failing.”

He recently claimed that Verizon was making a “stupid deal” for AOL. In a Tweet, he disparaged the Coca Cola Company as “garbage” but said he would keep drinking it.

“The Coca Cola company is not happy with me–that’s okay, I’ll still keep drinking that garbage.”

He called H&R Block and Nordstrom “terrible.” He said Sony had ‘terrible leadership” and described executives at S&P Global, a financial firm, as “losers.”

And then there is the recent hullaballoo about Jeff Bezos and Amazon, where once again, the greatest liar on earth, makes up facts (tweet about post office losing money), this absurd canard being that Amazon loses the U.S. Postal Service money, when in fact, it makes money, helping to subsidize it:

“While we are on the subject, it is reported that the U.S. Post Office will lose $1.50 on average for each package it delivers for Amazon. That amounts to Billions of Dollars.”

This attack of Amazon is just another ploy to express his personal grievances against the Washington Post-another fake news organization, which is owned by Bezos. I am sure The Don got tremendous pleasure out of watching Amazon’s stock value go down because of his tweet. 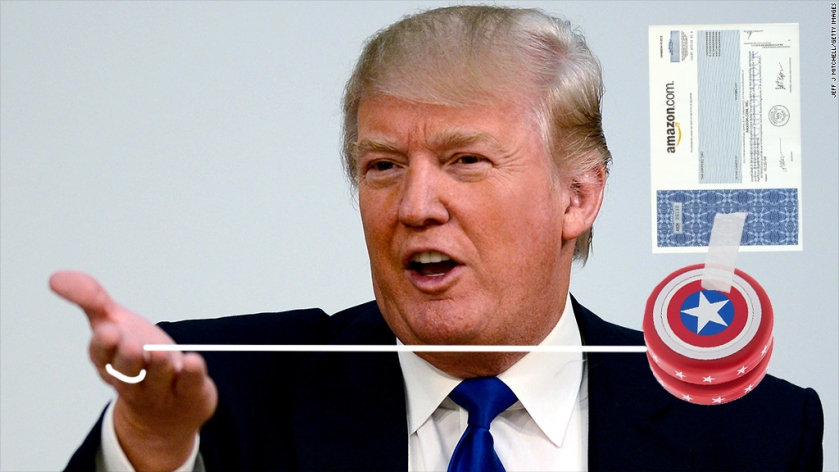 The Don just loves to devalue other businesses, but what about The Don’s heralded business success?

One of the consequences of his remarkable business acumen was that by 2008 no American Bank would lend him any money for his real estate ventures; oddly enough, Deutsche Bank was happy to open its coffers to him. The Don then reneged on his payments to Deutsche Bank, who sued him. In classic form, The Don counter sued and then blamed Deutsche Bank for contributing to the creation of the financial crisis, which he blamed for his difficulty for paying back his loan. And then oddly enough, Deutsche Bank decided to lend him more money, which is something a bank would certainly do for someone who didn’t pay his loans back and sued them?

Turns out that Deutsche Bank has known ties to Russia and is under investigation by the Department of Justice. The bank holds hundreds of millions in personally guaranteed debt for the president. Russia, Russia, Russia. The Don has no dealings with Russia, right?

Whatever success The Don has had has been tainted with all kinds of improprieties-from stiffing workers, to suckering people in to signing up for the scam and false promises of Trump University, to potential money laundering schemes. When it comes to his business ventures, there are no rules he won’t break, no one he wouldn’t betray or cheat to get what he wants. And up until now, he is gotten away with it all. His business success-what he is greatest at is beating the system. This gives him a perverse pride.

Remember the iconic moment in the debate with Hillary when his response to her accusation that he didn’t pay taxes and he responded: “that makes me smart!” I don’t know about you, but at that moment he brazenly announced to America that if elected, he would continue to rip off the system and do whatever he wanted to get what he wanted.

Being in his administration seems to intoxicate by association, producing an elixir for immorality, graft and greed. It’s like a Yoda mind game. “May the force be with you” to cheat with impunity.

So while The Don screams “loser” at successful American businesses, who are the real winners?

Before he became the head of H.U.D. Ben Carson probably had little interest in furniture. But something just came over him when he was in the presence of The Don. Now that he has spent $31,000 on a dining room set, he is shaking his head and been heard saying: it was as if I had no control; I just had to have that furniture.

Perhaps soon to be another casualty of The Don’s firing squad by Tweet, Carson’s focus has turned to how he can keep the furniture.

Adding insult to injury, Carson’s removal of the words “inclusive and “free from discrimination” from the HUD Mission statement, has come back to haunt him: as a black man he may not be allowed to move back in to his affluent neighborhood.

Then there was our buddy Tom Price, Chief of Health and Human Services, who had to skedaddle from the administration because of improprieties related to money he spent on more than two dozen flights. And Price was so generous. He was ready to make amends by offering to pay back $52,000 of a total cost of $1,000,000. Now that’s the kind of deal The Don would have endorsed.

Secretary of Treasury Steve Mnuchin is another one who has gone flight happy spending nearly one million dollars of tax payer money on military flights.

Ryan Zinke, Secretary of the Interior has also abused his flying privileges costing the tax payers money. My favorite junket was a flight to Las Vegas where he gave a motivational pep talk to the newest NHL franchise, the “Golden Knights.” What on earth did he say? I want you guys to go out there and tear up the league like I am tearing up our national monuments?

Now we come to my favorite: Scott Pruitt, who is on the hot seat for so many dubious things that you could create a reality TV show called “Swampland.” Or how about, in the spirit of the recent celebration of Passover, substituting Pruitt’s transgressions on the American people for the Ten Plagues brought upon the Egyptians. First, the actual plagues:

2. Millions of dollars of unnecessary security costs. Rumor has it that he has 4                 bodyguards standing around his bed while he sleeps.

3. Rented a luxury apartment in D.C. for $50/day owned by the principle lobbyist for Cheniere Energy. Guess who is a principal owner of Cheniere energy? Carl Icahn! Guess who pushed Scott Pruitt as EPA director? Carl Icahn. Matter of fact, Pruitt, as head of the EPA, took a trip to Morocco on the tax payers dime to lobby for Cheniere Energy. I wonder how many more millions Icahn just made. I wonder what kind of bonus Pruitt received?

4. Gave large raises to staff under the guise of the Safe Drinking Water Act. The salaries of Sarah Greenwalt and Millan Hupp — who had both come to Washington with Pruitt from Oklahoma — were raised from $107,435 to $164,200, and from $86,460 to $114,590, respectively. The Safe Drinking Water Act allows the EPA administrator to appoint up to 30 staffers without White House or Senate confirmation. It is normally used to hire experts and other specialists into custom-made roles in the agency. Gee, do you think those staffers were deployed to Flint, Michigan to help deal with their drinking water crisis?

5. A caravan of cars with sirens escorting Pruitt to one of his favorite restaurants. Heard the place has escargot you can die for!

6. Requested two desks (one bullet proof) for $70,000. It turns out his request wasn’t honored, but he did manage to get a desk that equals the one in the oval office.

While The Don and his cronies rip off the country, the real losers turn out to be the American people.
Oh well.