The Shootout at the O.K. Corral between lawmen and outlaws is generally considered the most famous shootout in the American Wild West. On the law and order side, it featured three Earp brothers (Wyatt being the most famous) and Doc Holliday. Billy Claiborne, Ike and Billy Clanton and Frank McCleary, were the “wrong doers” and were pissed at the Earps for interfering in their illegal activities.

In the wake of the Parkland High School shooting and the protests against gun violence taking place all over the country, I am aware that the use of a shootout could feel a little tone deaf; but the “law and order” president’s vitriol and relentless attack of the F.B.I., which he amped up with the firing of Andrew McCabe and attack on Special Prosecutor, Robert Mueller, makes it an apt analogy.

At the same time as he attempts to denigrate and sow seeds of doubt in to the Russia investigation and challenges the rule of law, he defies the advice of his National Security team and congratulates Putin on his pre-ordained victory. The briefing declared in all caps: DO NOT CONGRATULATE the Russian President on his re-election. So how do we understand this?

Whatever the reason for his actions, it is like Wyatt Earp turning on his fellow lawmen and revealing himself to be one of the criminals. Talk about traitors! As for The Don, he has always been a thug and been involved in shady, criminal activities, but he has outdone himself by what seems like traitorous actions with Russia.

While Putin poisons people on British soil, The Don says nothing and tries to poison the F.B.I. and the Russia investigation with rapid-fire tweets, or what is The Don’s social media version of the AR-15.

That being said, I thought it would be interesting to present, in the parlance of jazz, a “call and response” through Tweets. What follows is The Don’s call to end the Mueller investigation and responses to it. (The italics are my words.)

The Don: “Why does the Mueller team have 13 hardened Democrats, some big Crooked Hillary supporters, and Zero Republicans… Another Dem recently added…does anyone think this is fair? And yet, there is NO COLLUSION!”

Lindsey Graham: “If he tried to do that (fire Mueller), that would be the beginning of the end of his presidency, because we’re a rule-of-law nation…When it comes to Mr. Mueller, he is following the evidence where it takes him, and I think it’s very important he be allowed to do his job without interference, and there are many Republicans who share my view.”

The Don: “The Mueller probe should never have been started in that there was no collusion and there was no crime… It was based on fraudulent activities and a Fake Dossier paid for by Crooked Hillary and the DNC, and improperly used in FISA COURT for surveillance of my campaign.”

Trey Gowdy: ‘If the president was innocent, he should “act like it” and leave Mr. Mueller alone… Let it play out its course. If you’ve done nothing wrong, you should want the investigation to be as fulsome and thorough as possible.”

The Don: “As the House Intelligence Committee has concluded, there was no collusion between Russia and the Trump Campaign. As many are now finding out, however, there was tremendous leaking, lying and corruption at the highest levels of the FBI, Justice & State.”

Jeff Flake: “People see that (firing Mueller) as a massive red line that can’t be crossed… We have confidence in Mueller.”

Mitch McConnell: This is all so silly. There is no need for legislation to protect Mueller. Why is everyone having a tizzy fit over this?

The Don: “The Fake News is beside themselves that McCabe was caught, called out and fired. How many hundreds of thousands of dollars was given to wife’s campaign by Crooked H friend, Terry M, who was also under investigation?” he tweeted. “How many lies? How many leaks? Comey knew it all, and much more!”

James Comey: “Mr. President, the American people will hear my story very soon. And they can judge for themselves who is honorable and who is not.”

The Don: “Spent very little time with Andrew McCabe, but he never took notes when he was with me I don’t believe he made memos except to help his own agenda, probably at a later date. Same with lying James Comey. Can we call them Fake Memos?”

Marco Rubio: “I don’t like the way it happened… He (McCabe) should’ve been allowed to finish through the weekend… “Obviously he (The Don) doesn’t like McCabe and he’s made that pretty clear now for over a year. We need to be very careful about taking these very important entities and smearing everybody in them with a broad stroke.”

Andrew McCabe: “Here is the reality: I am being singled out and treated this way because of the role I played, the actions I took, and the events I witnessed in the aftermath of the firing of James Comey,”

Andrew McCabe: “The whole truth will come out in due course.”

Mitch McConnell: Such a shame that poor sucker lost his pension, ain’t it?

John Dowd (not a tweet): I pray that Acting Attorney General Rosenstein will follow the brilliant and courageous example of the F.B.I. Office of Professional Responsibility and Attorney General Jeff Sessions and bring an end to alleged Russia collusion investigation manufactured by McCabe’s boss James Comey based upon a fraudulent and corrupt dossier.”

John McCain: “It is critical that Robert Mueller be allowed to complete a thorough investigation into Russia’s interference in the 2016 election unimpeded.”

John Brennan (former C.I.A Director): “When the full extent of your venality, moral turpitude, and political corruption becomes known, you will take your rightful place as a disgraced demagogue in the dustbin of history… “You may scapegoat Andy McCabe, but you will not destroy America. America will triumph over you.”

General Barry McCaffrey: “Reluctantly I have concluded that President Trump is a serious threat to US national security. He is refusing to protect vital US interests from active Russian attacks. It is apparent that he is for some unknown reason under the sway of Mr Putin.”

Mitch McConnell: I still don’t see what the hubbub is all about? Putin “wouldn’t be high on my list” of people to call. Can somebody tell me why people call me an invertebrate? 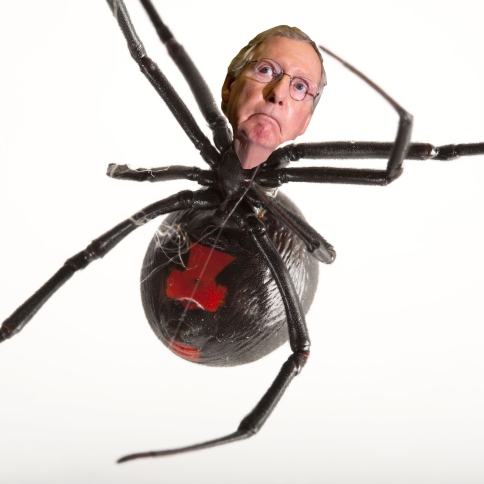 And what about the majority of the Republicans? Where are their voices? Seems they are more concerned about The Don tweeting about them and their reelection than they are with Russia messing with our democracy.

My Tweet: New species of invertebrates spawned. They have been classified as Moralas Turpitudous Republicanas.