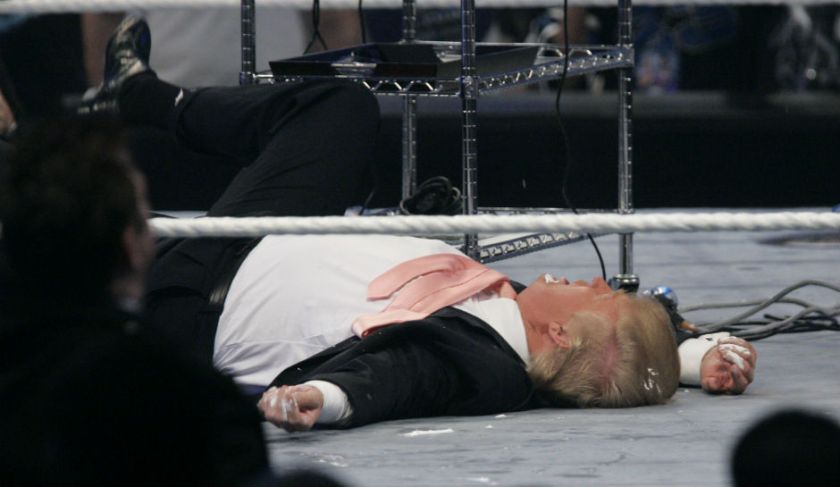 The Don’s vanity and need for perfection is as well known as his orange hair. But now we have another telling detail to further elucidate how far he will go to hide any blemishes and as well, finally, solve the enigma of that strange orange bouffant.

According to Princess Ivanka (who reported this to Michael Wolfe, author of the just released blockbuster tell all, “Fire and Fury”), The Don has undergone painful cosmetic surgery, called Alopecia reduction, which entails having the bald spot cut out of the scalp, and the remaining skin pulled in and sewn shut to cover it up.

Here’s Ivanka from “Fire and Fury: ‘‘She often described the mechanics behind it to friends: an absolutely clean pate—a contained island after scalp-reduction ­surgery—surrounded by a furry circle of hair around the sides and front, from which all ends are drawn up to meet in the center and then swept back and secured by a stiffening spray.”

But Princess Ivanka, from where doth the orange derive? It seems daddy’s unusual orange shade is the result of impatience- that he can’t keep the product on long enough to achieve its intended shade! 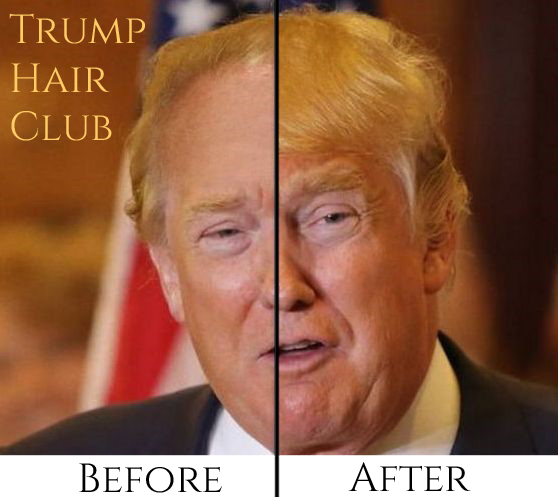 Trump has long maintained his hair is natural, although, it was previously claimed, he attacked first wife Ivana while recovering from a 1989 scalp reduction operation performed by plastic surgeon Dr. Steven Hoefflin. To paraphrase the famous Clairol Shampoo commercial: only The Don’s hairdresser knows for sure.

So what have we learned from the above?

If it is true that Ivanka revealed this to Michael Wolfe, she may be cut out of the will or better yet, surgically extracted from it. Lucky for her, between her own assets and Jared’s, she already has gobs of money- though their personal involvement in money laundering may create a major bald spot in their bank accounts.

A man who can’t keep hair product on long enough for the proper color to emerge is not a man you can trust with the nuclear code.

News flash: The Don insists his hair is all -natural and denies it all–liar, liar, orange hair on fire. Prediction: To distract from the buzz about his hair, The Don will have the F.B.I. investigate whether Hillary Clinton’s hair is real and there will be chants of “lock her up, she wears loser wigs”. Sad. So sad!

A man who can attack his wife, while recovering from scalp reduction surgery, should definitely not have access to the nuclear codes.

Burning questions I have:

So now that we solved the riddle of The Don’s mysterious comb-over, let’s talk about C.O.M.A., which is my acronym for the life support situation The Don and many of his cronies find themselves in.

C is for Collusion

The question here is simple: Did The Don and members of his campaign collude with the Russians to impact the 2016 election?

So what do we know up to this point?

Jeff Sessions, Carter Page, Paul Manafort, Jared Kushner, Don Jr., Sesame Street star Papadopolous, Mike Flynn and more, have all had contact with the Russians. To date there have been 19 Russians known to have contact with members of the Don’s campaign. You do the math.

Flynn and Pap have already pleaded guilty and are spilling the beans. Flynn, the man The Don defended as a “good man,” after he was forced to let him go, has of course, been disavowed and branded a liar. (Remember, The Don still appointed Flynn Director of the NSA despite warnings by Obama and others that they had evidence that Flynn had been compromised by the Russians!)

Flynn was tweeting  “rip it up” and good to go” during the inauguration ( regarding undoing sanctions.)

Remember the Republican National Convention? A strange thing happened with their platform: the only thing that was changed (allegedly with Paul Manafort’s urging and blessing) was to remove the section that supported the U.S. sending military support to the Ukraine if the Russians meddled in their affairs.

Don Jr., Manafort and Jarod, met with an assembly of Russians in Trump Towers on the premise of getting dirt on Clinton. I like to refer to this meeting as the “I love it” meeting in honor of Don Jr.’s email response to Russian’s offer to tarnish Hillary. The now beleaguered Steve Bannon called their meeting “treasonous” and “unpatriotic.” Bannon also speculated (as reported in Michael Wolfe’s “Fire and Fury”) that “The chance that Don Jr. did not walk those jumps up to his father’s office on the 26th floor is zero.” Not sure what all the fire and fury is all about, as they were just talking about adoption, right? And will someone tell me what a jumo is?

Jared was in conversations with Russians to open a back channel line of communication.

Sesame Street star Papadopolous, a.k.a., the “coffee boy,” informed an Australian diplomat that he was getting dirt on the Clintons.

And there is more but my patience, like my hair is disappearing by the second and I am growing bored with C so let’s go on to O.

The question here is did the Don’s administration and the Don himself do things intentionally to block the investigation into Russia’s interference in our election?

So what do we know about this?

Though Jeff Sessions actually did the proper thing by recusing himself from the investigation (of course, only after he was exposed for lying to the Senate Intelligence Committee about contact with the Russians), he tried to get dirt on James Comey published on a daily basis. Perhaps this was his way of mitigating The Don’s fury over his recusal- a back channel attempt to discredit Comey? After all, as The Don recently stated, he expected Sessions to be loyal and do his bidding by running interference on the Russia investigation. Recently, The Don bemoaned needing a Roy Cohn in his corner. Roy Cohn, a nefarious man, worked for The Don, but is most known for working  as lead counsel for Joe McCarthy’s red scare witch hunt in the 1950’s and was eventually disbarred Cohn for unethical and professional conduct.

After James Comey did not swear undying loyalty and refused to “see his way” to let the investigation in to Mike Flynn go, the Don fired Comey. You don’t need to be a hairdresser to see that the comb over of Comey was an attempt to obstruct justice. In fact, when interviewed by Lester Holt, of NBC news, The Don stated his firing of Comey was due to the fact that he was such a pest regarding Russia. I thought it was because Comey had looked in to the origin of The Don’s comb over. Man was I on the wrong trail!

Then there are the recent revelations found in former Chief of Staff Reince Priebus’ hand written notes that indicate that The Don asked Don McGann, the White House Counsel, to pressure Sessions not to recuse himself. It seems, under our constitution, The Don is not supposed to meddle in this way in Justice Department decisions, nor is the white House lawyer allowed to do this. Constitution, eh?

Then there is the sudden resignation of Mark Corallo, a spokesperson for The Don’s legal team, who told Michael Wolfe that he feared the Air Force One meeting, where the Don and a number of staffers discussed the strategy to defend Don Jr.’s meeting at Trump Towers with the Russians, amounted to obstruction of justice.

The question here: was The Don or members of his staff involved in the concealment of the origins of illegally obtained money, typically by means of transfers involving foreign banks or legitimate businesses?

So what are some of things being investigated?

The old adage, that if you want to get to the truth in an investigation, you need to follow the money, is something Robert Meuller is well aware of and pursing doggedly.

He has already indicted Paul Manafort and his assistant Paul Gates on conspiracy to launder money.

It is clear that Meuller and his team are focused on unraveling The Don’s family tangled financial and real estate empire in an attempt to trace illegal transfer of money originating from Russian Oligarchs and organized crime figures.

One example of this (not officially proven to this point), is that The Don made tens of millions of dollars in profits by allowing Colombian drug cartels and other groups to launder money through a Trump-affiliated hotel in Panama.

In Michael Wolfe’s book, Steve Bannon had this to say:

“This is all about money laundering,” Wolff quotes Bannon saying. “Their path to [expletive] Trump goes right through Paul Manafort, Don Jr. and Jared Kushner.” For good measure he added, “It’s as plain as a hair on your face.”

Bannon knows that Donald Jr. and Kushner are potential liabilities for the president, especially in the context of a sophisticated money-laundering probe.

Also, The Don’s dealings with Deutsche Bank the past 20 years, has the smell of dead fish. 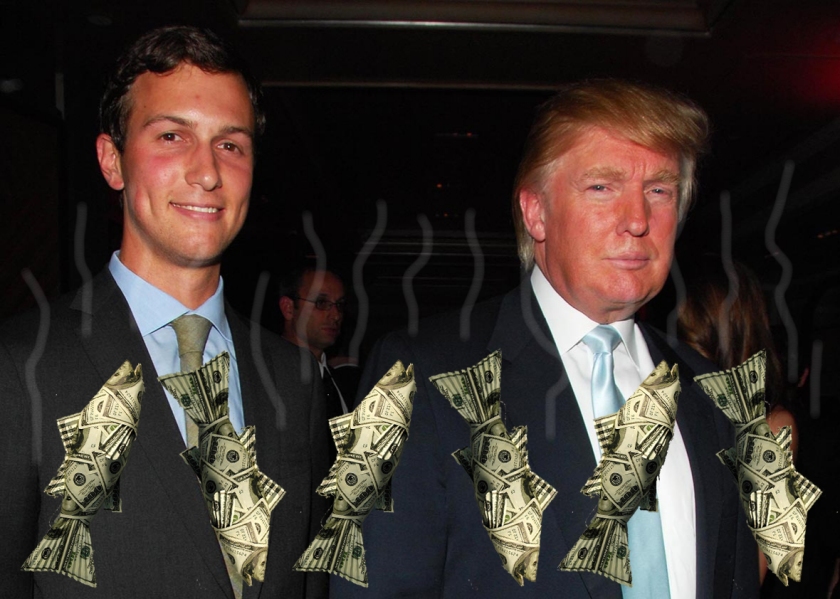 Talk about exercising the 25th Amendment has been as rampant as the Don’s tweeting. Chances are highly unlikely this will occur, as it would take the entranced sycophantic cabinet members, led by Mikey Pence, to activate this process. However:

In December lawmakers from both parties brought in a psychiatrist from Yale University to discuss The Don’s mental state. Professor Bandy X. Lee, supposedly told legislators that The Don is ‘falling apart under stress,” is “going to get worse” and will eventually “become uncontainable with the pressures of the presidency.”

Many other mental health professionals as well as political pundits have raised the prospects of the invocation of the 25th Amendment.

The Don’s well observed impulsiveness, erratic and childish behavior is a scary thing when you think about nuclear buttons. His incompetence, as evidenced by his lack of knowledge, is well documented and a serious concern to many of the people who work with him. His recent response to the Michael Wolfe book was to state that he was a “stable genius.” That’s reassuring. I guess only his hair dresser knows for sure.

P.S. Republican legislators response to all the above has been to obstruct, obfuscate, hail diversionary law suits and frankly unpatriotic, considering we are talking about evil Russia interfering in our elections and the possibility that the president of the U.S. and others may have committed, to use Bannon’s words, “treason.” I guess you could say that the Republicans are involved in one of the greatest comb overs ever!

*For more on The Don’s hair, see my earlier piece, OMFG, Doesn’t It Just Blow Your Mind!