One of my favorite things about a campfire is that moment you slide a marshmallow on to a stick and place it into to the flame. You take that fire-roasted marshmallow and place it between two graham crackers layered with chocolate. Then you wait for the marshmallow to melt the chocolate, and voila, you have one of the great inventions of human kind: S’mores.

I am assuming that right now you are craving one of these delectable treats, but probably wondering where I am going with this.

This country has yet to truly face the great stain of slavery and the institutional racism it has fostered; our divisiveness- our fear of the other, which manifests in Islamophobia , Anti-Semitism, Homophobia and Transphobia- is sadly what makes America un-great!

Our president is fanning the flames of this divisiveness by attacking black players in the NFL, banning Muslims from certain countries, banning Transgender individuals from the military, empowering White Supremacists during the riot in Charlottesville and claiming a Mexican American judge was not fit to oversee a lawsuit against him.

In Puerto Rico, The Don’s lack of empathy to the plight of its citizens was astounding. According to him, Puerto Rico is a pain in the butt, a financial burden to the U.S. His response was void of humanity; it had the tone deaf sound of someone being told that they had to fork over extra money to complete a business transaction; the fact that the money was for brown skinned people, well, was more than he could stomach.

Watching him toss rolls of paper towels in to a crowded room, like some “moronic” mascot at a sporting event shooting t-shirts out of an air gun, turned his visit in to a carnival act. Frankly, if I had the choice, I would take any mascot over him. Chances are great that the hard working person inside the costume has a more highly developed capacity for empathy, probably knows more about history, won’t continuously lie to advance an agenda that only benefits his bank account and isn’t a role model for White Supremacists. 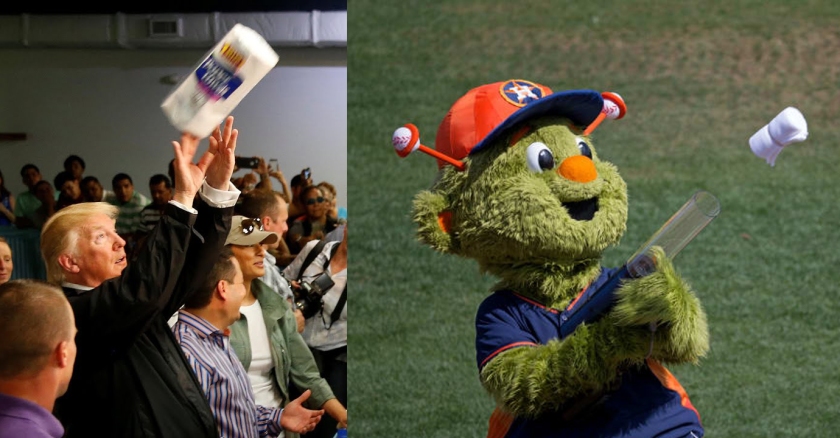 And now we have Ray Moore, winner of the Republican primary election in Alabama, who may very well replace Jeff Sessions, the racist, anti-immigration Attorney General. And we also have Lindsey Graham, who created the cruel and heartless health care plan, which would have devastating Medicaid (read that as minorities, though, to be fair, it would have effected many poor white folks as well.)

With Moore and Sessions, sandwiched between “cracker”Graham, what do you get: S’Moores: America’s White Supremacist Treat! Though, in the AWS version, you substitute white chocolate for milk chocolate.

Here’s what Graham had to say in 2014 during his campaign: “White-men-only clubs are ” going to do great in my presidency.” 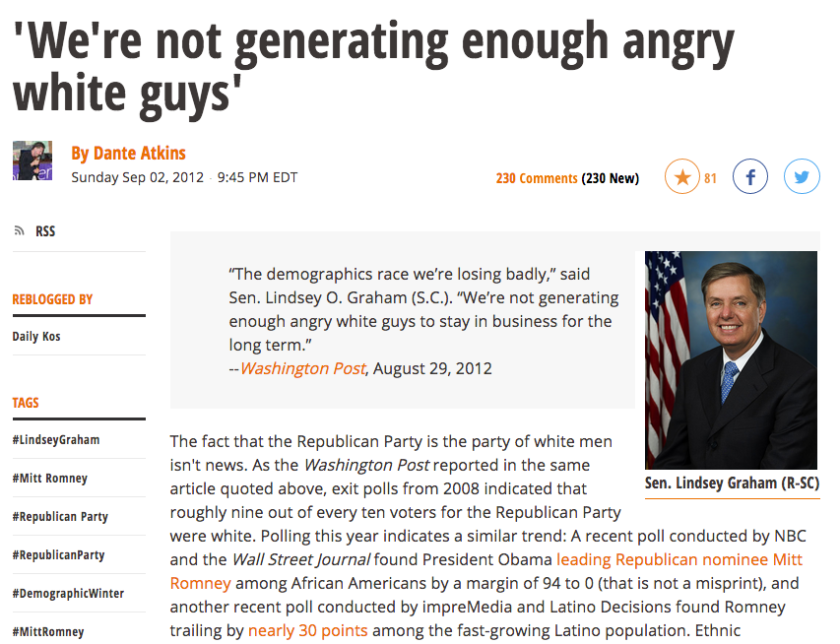 And for Sessions, his racist views are well known. Let us not forget that in 1986, Sessions was denied a Federal Judgeship because his views were considered too racist. Yes, that was a long time ago and people can change but not Sessions. All you have to do is look at his activities as Attorney General. His confirmation was a smack in the face to people of color and immigrants and an affirmation to White Supremacists. Every single Republican senator voted for him and slept like a baby that night.

And now to Roy Moore, the inspiration for S’Moores, the new White Supremacist Treat. When Moore won the primary, not one Republican came out to decry this man’s despicable bigotry and extreme views. Every Republican slept like a baby that night as well.

In 2001, when Moore was Chief justice of the Alabama Supreme Court, he was removed from office for refusing to remove a monument of the Ten Commandments commissioned by him for the Alabama Judicial Building despite orders from federal court.

In 2013, he was elected Chief Justice again (Alabama just really loves its law breakers!) but was suspended in May 2016 for directing judges to continue to enforce the state’s ban on same-sex marriages despite being unconstitutional. After losing an appeal, he resigned and thought: Hey, I live in Alabama, Trump is president, Steve Bannon is my friend and I love Jeff Sessions and he got to be Attorney General, so maybe I should run for his seat.

Moore was a vocal supporter of the Birther movement, the movement that The Don rode all the way to the White House.

He has declared that Islam is a false religion and stated that Ellison, our first Muslim congressman, shouldn’t be allowed to serve in Congress.

He has promulgated falsehoods and sowed seeds of anxiety by claiming ‘There are some communities under Sharia law in our country.” When pushed to define where these communities are he stated: “Illinois, Indiana-up there. I don’t know. Well let me just put it this way- if they are, they are; if they’re not, they’re not.”

He has referred to Asian American and Native Americans as “Reds and Yellows.

When asked about his position on the Dreamer Program, he stated he wasn’t aware of it. To quote Rex Tillerson’s favorite term of endearment for The Don, Moore is a “Mooreon.”

He has made unconscionable comments about the tragedies of 9/11 and Newton stating that they occurred because of “a lack of faith in God” and that God was “upset because we legitimize sodomy and abortion.”

Below is a statement he made as Supreme Court Justice of Alabama regarding a controversial custody case, in which Moore overturned a lower court decision awarding custody to a lesbian mother over an abusive father claiming a gay individual wasn’t fit to be a parent:

“Homosexual conduct is, and has been, considered abhorrent, immoral, detestable, a crime against nature, and a violation of the laws of nature and of nature’s God upon which this nation and our laws are predicated,” wrote Moore. He added, “The state carries the power of the sword, that is, the power to prohibit conduct with physical penalties, such as confinement and even execution. It must use that power to prevent the subversion of children toward this lifestyle, to not encourage a criminal lifestyle.”

It is extraordinary that in 2017, there may very well be a senator who has these beliefs. Like The Don, Moore’s success is the result of a cancerous Republican Party. They said nothing when The Don and Moore promulgated the myth of the Birther movement, which was nothing less than an attempt to delegitimize the existence of a black president. And their complicity in this racist rhetoric has now brought us The White Supremacist’s treat called S’Moores.

I don’t know about you, but for me, dark chocolate is the only kind of chocolate; frankly, white chocolate makes me want to barf!