It all started on a Friday night in the Deep South, Alabama to be exact. The Don was in his element doing a campaign appearance for a man named Strange. And boy was it strange. The event had all the trimmings of a University of Alabama, aka “Crimson Tide” pre-game pep rally. It could have been part of an episode of the TV show “Friday Night Lights,” when before the start of each game, Coach Taylor turns to his team and leads them in their battle cry: “Clear eyes, full heart, can’t lose.”

But what we heard from The Don was: Blind eyes, black heart, you are losers.

As one has come to expect of The Don, when he is serving up red meat to his base, the love-fest gets The Don’s juices flowing and all bets are off. It is rather remarkable to watch his people swoon in ecstasy as he dissembles in to insults and provocations about anything that comes to mind. You begin to feel you are at a mega church service led by a fire and brimstone preacher. The Don’s word is gospel. All those who are not on his side, who slight him are heathens and targets of his anger. John McCain, for not supporting an unconscionable health care plan and of course, a rousing rendition of “Lock her up, Lock her up.”

He even went after Stephen Curry, the star of the NBA champion Golden State Warriors, who had stated that the Warriors could make a statement by choosing not to go to the White House.

When The Don got the news that Steph took him to the hoop and finger rolled him, the Don struck back on Twitter ”Going to the White House is considered a great honor for a championship team. Stephen Curry hesitating, therefore invitation is withdrawn! “ He who hesitates is lost!

Here is my fantasy of Curry’s response back: “Being the president of the United states is an honor and your race-baiting behavior, divisiveness and lack of leadership is an embarrassment to our country. Your invitation to lead this country is formally withdrawn!”

U bum @StephenCurry30 already said he ain’t going! So therefore ain’t no invite. Going to White House was a great honor until you showed up!

Then it was Colin Kaepernick’s turn to get his comeuppance. Kaepernick was the first to take a knee during the national anthem last year. This was what he said back then:

“I am not going to stand up to show pride in a flag for a country that oppresses black people and people of color.” He continued, “To me, this is bigger than football and it would be selfish on my part to look the other way. There are bodies in the street and people getting paid leave and getting away with murder.”

Here is our honorable president’s response:

If a player wants the privilege of making millions of dollars in the NFL,or other leagues, he or she should not be allowed to disrespect….

…our Great American Flag (or Country) and should stand for the National Anthem. If not, YOU’RE FIRED. Find something else to do!

Trump said owners should respond by saying: “Get that son of a bitch off the field right now, out, he’s fired. Fired!”

In America, now you can get “fired” for expressing your opinion if it doesn’t fall in line with The Don’s. Too bad we can’t fire him for his, as despite his cry for patriotism The Don doesn’t have a patriotic bone in his body, as all he cares about is himself. And then there is a little thing called collusion with the Russians.

Here’s what I wish the NFL should say to the president:

If a person that has used his privilege to rip off thousands, is a racist, sexual predator and somebody who is only interested in himself and perhaps compromised our democracy by colluding with the Russians, he should be fired! Oh yeah, and he should go to jail, too!

Thankfully the NFL owners stood in solidarity with their players. Even Patriot owner, Robert Kraft, a vociferous supporter of The Don, linked arms with the players. Dallas Cowboy’s owner Jerry Jones took a knee with the entire team. What choice did the owners have? If they fire all their black players that have no NFL and then they don’t make any money!

Sense some cynicism over their sudden found solidarity?

Where was their support when Kaepernick made his statement last year? Is it a coincidence that Kaepernick, who once led his team to the Super Bowl just a few years back, and still is skilled enough to play in the NFL, was not picked up by any team? Many who know football believe he certainly still has the ability to help a team, even if it is as a backup Quarterback. I heard Carl Banks, a former N.Y. Giant star, state unequivocally that Kaepernick was definitely ready for prime time.

After all, the NFL let Michael Vick back in to the league and he killed dogs! Others have been allowed to play despite sexually assaulting women. But taking a knee during the National Anthem, protesting our country’s history of brutality toward blacks and institutional racism that’s going too far.

No matter that the anthem was authored by a white supremacist, Francis Scott Key, who was a proponent of African colonization — exporting free blacks back to Africa — and an opponent of the anti-slavery movement.

Here is a stanza from the third verse of our national anthem, words written by Key about slaves who fought with the British in the War of 1812 because the British promised them freedom.

Their blood has washed out their foul footsteps’ pollution.

No refuge could save the hireling and slave,

From the terror of flight, or the gloom of the grave.

Institutional racism in The “Land of the free and home of the brave,” is a deep wound in the America psyche that challenges the very notion of what America imagines itself to be. Stoking the flames of divisiveness is a tried and true strategy. The Don has done what other presidents have done before: used it as a wedge issue for political advantage. Nixon and Reagan were prime examples of this. The fact that he has set his sites on the football players, wrapping himself in the flag, is just the ploy of the moment.

And since football is the lightening rod of the moment, let’s talk about another kind of football: the nuclear one! In the vernacular of the game, The Don, as our quarterback, is talking about: going deep, throwing the down and out, chucking the bomb.

His speech at the U.N. last week, where he went ballistic on North Korea, declaring with his small handed bravado that the U.S. would totally annihilate North Korea if the “little rocket,” Kim Jong Un, crossed the line. It was quite a shocking moment in the annals of the U.N., but we have by now learned that The Don lives for shocking moments when he is on the world stage. His statement sent shivers down my spine. A reckless, infantile, revenge seeking quarterback with his hand on the nuclear football! What’s so scary about this last statement is that I could have used the same exact statement to describe Kim Jong Un. 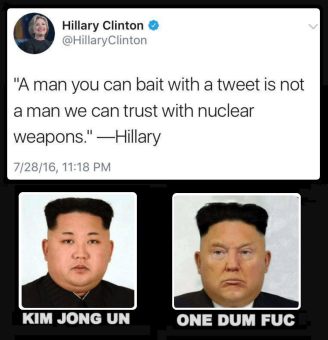 To quote Hillary Clinton “A man you can bait with a tweet is not a man we can trust with nuclear weapons.”

In a game of life and death, with “the little rocket” and “the dotard” (Kim’s name for The Don) squared off, nose to nose, at the line of scrimmage, the world holds its collective breath.

It harkens me back to the Nixon days, when the Watergate investigation was boring down on him and he was becoming increasingly unstable and drinking.

During that time Nixon created great concern. At one point he told congress, “I can go in my office and pick up a telephone, and in 25 minutes, millions of people will be dead.” At the time, Senator Alan Cranston had phoned Schlesinger, warning about “the need for keeping a berserk president from plunging us into a holocaust.” As a result, Secretary of Defense James Schlesinger issued an unprecedented order that if the president gave such an order military commanders should check with either him or Secretary of State Henry Kissinger before executing them. Schlesinger feared that the president, who seemed depressed and was drinking heavily and might take the football and go for the end zone.

All I can say is that I hope James Mattis and Rex Tillerson know their history and have had that talk with the military commanders and the handlers of the football because with an erratic, vengeful, infantile man at quarterback we have to prevent a fumble!