For the record, those famous words said by Tom Hanks in the film Apollo 13, are not accurate and were said by Hanks for dramatic effect in the movie. What was said was “Ok Houston, we’ve had a problem here.” However, in the case of the devastation of Hurricane Harvey, it is fair to say: “Houston we have a problem.” Can you just imagine The Don in that situation? Perhaps primping his hair, the other astronauts working feverishly to solve the problem and him remarking: guys, can you imagine how many people are watching-the ratings must be off the charts? As they say: once a narcissist always a narcissist!

So it was not surprising that the Don’s narcissism was on full display during his photo-op in Corpus Christie. An historic and devastating storm forced him to put his golf game on hold in order to make an appearance.

The Twitter storm that erupted over Melania wearing her signature stilettos for the trip to Texas seems like it caused some self-reflection on the flight, as she emerged from Air Force One with white sneakers. (I was really rooting for yellow rain boots.)

On the other hand, The Don, a man incapable of self-reflection, descended the stairs of Air Force One, waving to the crowd like the conquering hero arriving to check out the spoils of war, all smiles, wearing a white cap with USA on it. “Hail to the Chief.”

The white cap was one of two Official USA 45th Presidential Hats unveiled a few days before his arrival in Corpus Christie and is actually for sale for $40 on his Trump campaign website. Crass? Unpresidential? Unethical? Add those all together and what do you get: Donald Trump!

Who knows, maybe he will capitalize further on his amazing performance and produce a special edition of the hat for $100 that celebrates his historic trip to Corpus Christie with the inscription: Harvey makes me even greater. And people of Texas and Louisiana, if you call right now, you can get the very, very, very, limited edition hat that has a flotation device built in to the brim for only $150. Just dial: 1-800-URA-TOOL.

Proceeds from the sale of the hats will be used for paying for all the lawyers he has employed to defend him in: the Russia investigation, obstruction of justice, tax evasion?, money laundering?, being a despicable human? and the interest he owes on his loans from the Russians and Chinese. Wouldn’t it be cool if donated all the money  from the sales to the victims of the disaster? There were victims?

Actually, the cashing in on the storm started a few days before his Texas arrival, when he proudly proclaimed, that he released his twitter pardoning the great American Sheriff Joe during the storm coverage because he had a captive TV audience. Craven? Yes! Shameful? Absolutely! Expect nothing less from The Don, who has to be the center of attention regardless of what is going on.

Let’s review: The president of The U.S., during the most devastating storm in our history, where there was of loss of life and property and decimation of entire communities, decides to take advantage of high TV viewership to an announce the pardoning of a man who defied the constitution through racist policing? Pardons a man who used the words “concentration camp” to describe his Tent City; made men where pink underwear to humiliate them and whose facility is under investigation for dozens of sexual crimes?

If there is a God of Moral Bankruptcy (I think Evangelicals call that the Devil), he or she has rarely seen a better day. Add to that Sheriff Joe’s statement, that if asked, by his best buddy Don, to run against Arizona Senator Jeff Flake (who wrote a critical book about The Don), he would seriously consider it. Rumor has it that Sheriff Joe is in conversation with an advertising group and they have suggested “Round’ em up” as his campaign slogan.

Republicans is there anyone home? The answer to that is a definite no! They are in a foot race with The Don, sacrificing any sense of decency to the God of Moral Bankruptcy. After all, this thing in Houston is so annoying, as now they have to go in to the federal coffers and give billions to needy people. And they need to get on to the tax plan-one that gives more money to the rich. “Houston we have a problem.” 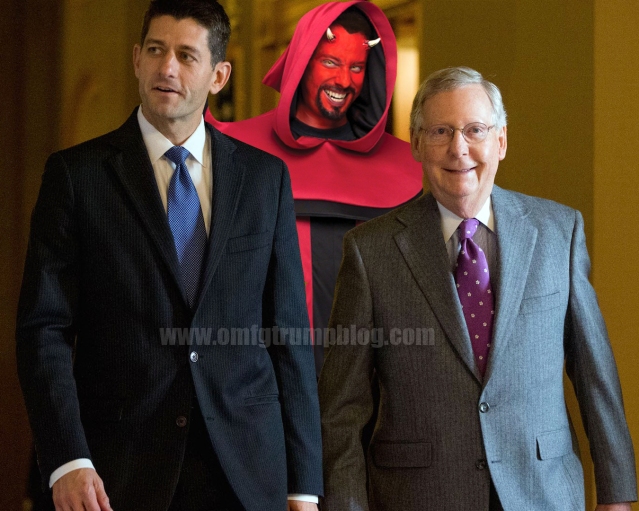 Can’t you imagine The Don gloating on about how amazing it is that he is president during the most historic storm ever! Well, you don’t need to imagine this, as true to form, here are some of the things he actually said: (italics his actual words, the rest mine.)

“Even experts have said they haven’t seen one like this.” Makes him historical, right?

“Historic rainfall in Houston; and the unprecedented flooding.” Makes him historical, right?

“Experts are calling #Harvey a once-in-a-500-hundred-year flood.” Disappointed that #Noah had a bigger one, but still it makes me historical, right?

“Epic!” Actually this one sounds like the review of the movie Ben Hur or better yet, Water World.

“What a crowd. What a turnout,” he remarked upon exiting the Corpus Christie firehouse. “Thank you for coming.” I just love uneducated people who have lost everything and see me as their savior.

“Houston, we have a problem!”

P.S. True to form, Ann Coulter, in an abhorrent and cynical nod to her devotees on the right, decided to take a page out of The Don’s playbook and capitalize on a captive audience by tweeting that it was more credible that Hurricane Harvey was caused by Houston electing a lesbian mayor, than climate change. The God of Moral Bankruptcy, aka the devil, had a great few days.

A selection of disasters caused by The Gays:

Cindy Jacobs, an anti gay activist claimed that the 5,000 dead birds discovered in Arkansas in 2011 was the result of Obama rescinding Don’t Ask Don’t Tell policy for the military.

Pat Robertson declared that if Disney World kept allowing gay tourists there would be hurricanes, tornadoes, “possibly even a meteor.” 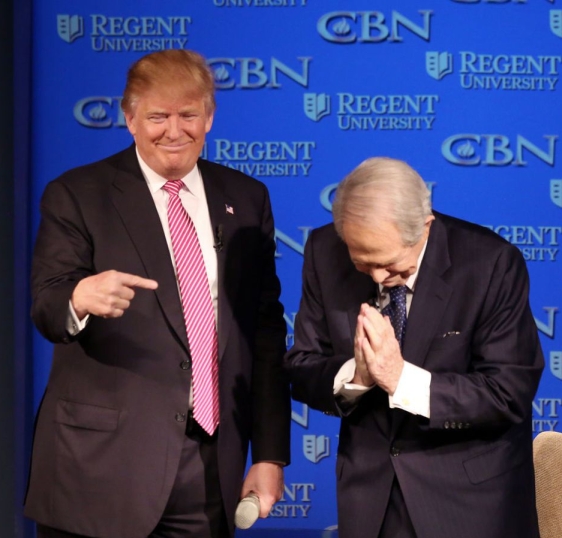