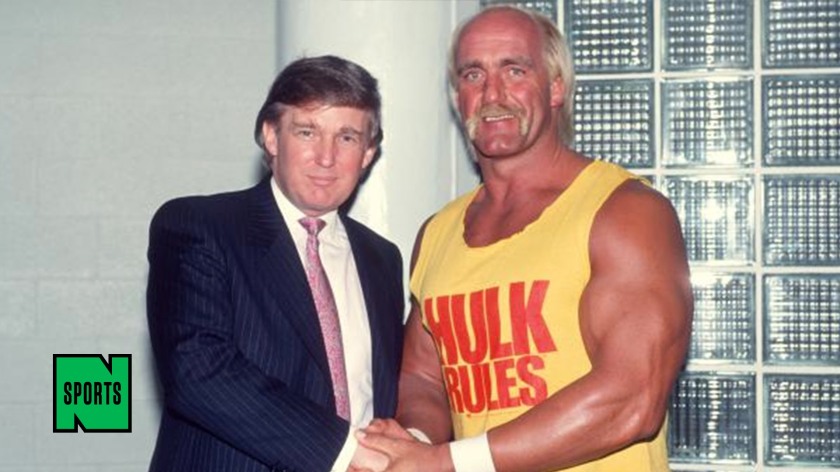 I knew there was a reason The Don chose Linda McMahon, former President of World Wrestling Entertainment, Inc. to head up the Small Business Administration.

To give McMahon her due, she has had extraordinary success as a businesswoman and knows something about the position she was appointed to, unlike some of The Don’s other cabinet picks, like Rick Perry, Department of Energy Chief, who didn’t even know what the agency did or Betsy Devos, Head of Education, who advocated for guns in schools to protect students from grizzly Bears.

It all came in to focus when The Don re-tweeted Reddit’s video of him smacking down someone sporting a CNN logo as their head. That Han Asshole Solo of Reditt (that’s really the video makers name!) produced the video is no surprise, being that it caters to the far right; but for The Don to re-tweet it is another story. To quote The Don on the North Korean president’s most recent missile firing: “Doesn’t he have any thing better to do with his time?”

Thomas Beset, Homeland Security advisor addressed The Don’s actions by stating: ”He’s a genuine president expressing himself genuinely.” Me thinks that Mr. Beset made an honest mistake and forgot the in in genuine.

And there is incredulous Tom Price, who as Secretary of Poor Health and Inhuman Services, stating to Chuck Todd of Meet The Press: “This is remarkable. Your program-a program with incredible history and that’s what you want to talk about?” I don’t know Tom, perhaps The Don’s assault on the free press might be something someone anchoring a show called Meet The Press might find relevant?

Let’s go to Sarah Huckabee Sanders (poor Sean Spicer we miss you so) and see what she had to say: “The president in no way, form or fashion has ever promoted or encouraged violence. If anything quite the contrary.”

Let’s see how Huckabee Sanders’s comment stands up to scrutiny by reviewing some of The Don and friends greatest hits:

The Don’s butler of over 30 years, Anthony Senecal, was investigated by the Secret Service after saying Obama should be dragged from the “white mosque and hanged from the portico.” The White House did disavow this, but as they say, the apple doesn’t fall far from the tree and Senecal spent 30 years serving him apple pie.

Al Baldasaro, a New Hamphshire state representative and an informal Trump advisor, had this to say about Hillary Clinton: “She should be put in a firing line and shot for treason.” Though there was repudiation of the statement by The White House, The Don didn’t sever ties with good ole Al as evidenced by his yelling out at a rally in New Hampshire: ”Al has been so great…Where’s Al, where’s my vet?”

Roger Stone, long time supporter and one time closest political advisor, who is thought by some to be the person responsible for getting The Don elected, had this to say about Clinton: “Clinton must be brought to justice-arrested, tried and executed for murder.” Still waiting for The Don to weigh in on that!

Then there are The Don’s own words:

“I wish I could hit you in the face. If not, why don’t you do it and I will pay your legal fees,” said at a rally. And believe it or not, The Don actually looked in to paying the legal fees of a supporter who sucker punched a protester at a rally.

Then there are the chants of “hang the bitch” and “kill the bitch,” heard at The Don’s rallies without any attempt to temper or admonish the crowd.

Then there is fire breathing Alex Jones’ and Breitbart News that spit out anti-immigrant, anti-semitic and Islamophobic vituperative that has lead to violence against these groups. 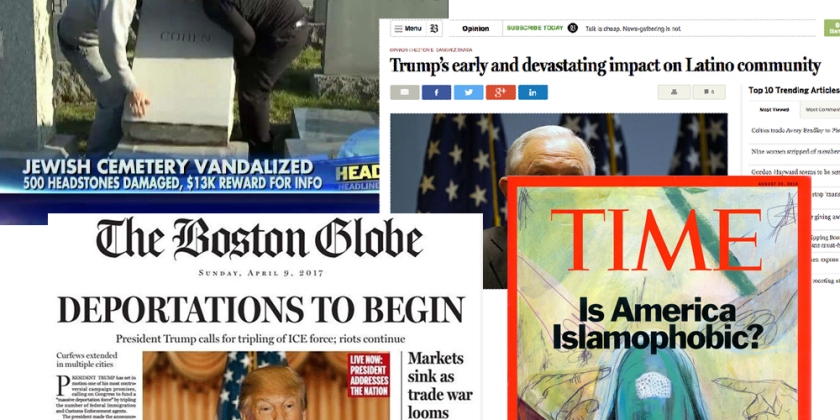 And of course, don’t forget The Don’s thinly veiled statement to defenders of the second amendment that alluded to taking matters in to their own hands because Clinton wanted to take away their guns.

So does this smack down video fade in to the daily maelstrom of The Don’s presidency like so many inappropriate and inane things or does it have legs?

The battle to sustain a free press against a deluge of attacks will remain unrelenting against cries of Fake News, but I think there is something else going on.

There is rumor on the street that as soon as the video appeared, renowned wrestler, Hulk Hogan, who actually threw his name in the ring to be a vice presidential candidate for The Don, got on the horn to Linda McMahon, to promote a new business idea. Hogan proposed it be called American Smack Down. He first had the idea when Greg Gianforte smacked down reporter, Ben Jacobs, during the special election in Montana. But it wasn’t until after the CNN video went viral, that his imagination went into overdrive and the idea came to fruition. And with the G-20 beginning time was of the essence.

“It’s important that Trump show strength and American dominance at these meetings,” said Hogan. “And as we have seen. the Fake News twists and distorts our Prez’s words so why don’t we give these asshole a piece of ole American Apple pie.”

McMahon was pumped and was jealous that she hadn’t come up with the idea herself. She mobilized her staff, as well as her promotional people from the heady days of WWE, Inc., and went to work, contacting Fox, Breitbart, Reditt, Alex Jones, Roger Stone and others to spread the word.

Hogan then informed McMahon that he had devised devastating take down moves for the Prez to use on each foreign leader. No more “Brainbusters”, “Chokeslams” “Facebusters” or “Tombstone Piledrivers.” Here are the new moves:

Trudeau sock stuffer: In this move, The Don takes the socks Justin wore in solidarity for both Gay Pride and Ramadan and stuffs them in his Trudeau’s mouth while holding his nose.

Methane Gas Mask Attack: This one is for Macron, the French guy. Trump shakes his hand with a power grip, pulls Macron over his knee and applies the Methane mask while laughing in his face saying: What Paris Climate Accord?

The Merkel Maneuver: This one is tricky-her being a lady and all. The Prez flatters her, tries to seduce her with talk about building a tower with both his and her name on it and when her guard is down, leans in to whisper something in her ear and applies the famous “Spock” power pressure point move, then catches her and puts her down gently.

The Siberian: This one will be tough. Putin will insist that they get bare-chested before their meeting, which will make the Prez very uncomfortable, so the Prez needs to act fast. As Putin is taking his shirt over his head, the Prez grabs Putin from behind and ties the sleeves of his shirt behind his back, locking up his arms, and with the shirt over Putin’s head, shoves a bottle of Stoli down his throat until he is out cold. But between me and you Linda, I am afraid the Prez might be outwitted by Putin and wind up being pinned. And when he is down Putin will make him say “uncle, uncle” and then repeat: “It was the 400 pound kid in his bedroom who hacked the election; it was the 400 pound kid.” 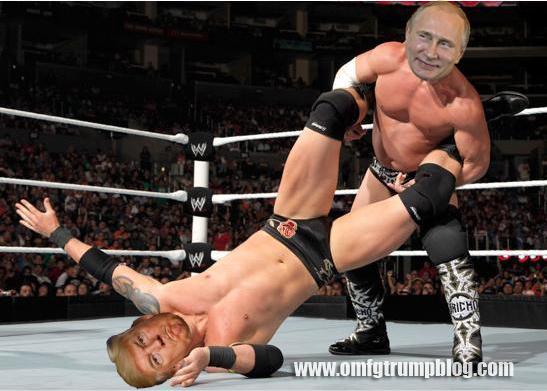 McMahon is so pumped by the idea that she immediately calls the president. Before you can say American Smackdown, Tillerson is sent off to Macedonia and Hogan is inserted as the lead international diplomat. As Hogan is boarding the airplanehe turns to McMahon and says: “and you should see the move I have for the Korean president. It’s called “Goose Step Down.”