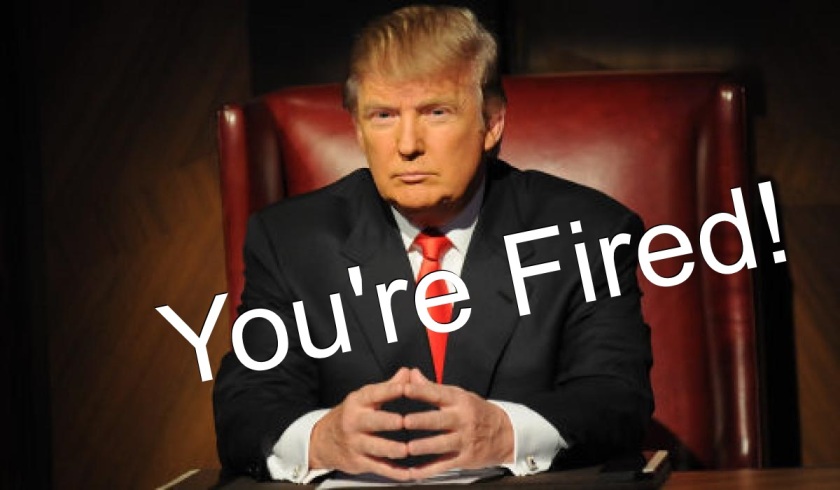 On the Apprentice, The Don took great pride and joy in saying “You’re Fired”. These words, like Clint Eastwood’s “Go ahead, make my day,” or Arnold Schwarzenegger’s “hasta la vista baby,” became iconic and synonymous with the men who said them. And now that The Don has told FBI director James Comey to “hasta la vista, baby,” I am hoping that soon The Don will be “making my day” when the truth of his dalliance with Russia is revealed and “You’re Fired” is something the American people get to say to him.

Let’s face it: The Don should have never become president. He is intellectually and temperamentally unsuited. On a daily basis he exhibits a level of incompetence unimaginable for someone who is the leader of the free world. His lack of curiosity, impulsiveness, sociopathic lying, tendency toward blithering hyperbole and astonishing dearth of knowledge on almost everything, from thinking Frederick Douglass is alive, to wondering why the civil war had to be fought, is a national embarrassment.

Internationally, he is seen as a know-nothing, erratic bully and a buffoon; in financial terms (the only one he has any interest in) his poor performance has forced Moody’s to downgrade the U.S. rating in the world to the equivalency of junk bonds.

In recent years, Republican presidents seem to specialize in people who lack intellectual gravitas. (Think George W. or Reagan), but at least they had the sense to surround themselves with people who understood how government worked. There were consistent principles they governed with. They realized they needed smart, experienced people around them to run the country. They needed people who could disagree with them without the fear of reprisal.

What we have in this administration are mostly a bunch of yokels who can only say, “yes”, as loyalty is everything to The Don. When I started this blog I chose to refer to him as The Don because when you see through the showboating entertainer, he is just a wannabe mafia thug who will whack you if you do not do his bidding. So when Comey refused to get down on his knees and swear his allegiance, The Don gave him the boot.

I have said this before and want to reiterate it now: The Don’s ascendancy was driven by his disturbing grandiosity and his fall will be driven by it as well.

As a candidate, the strong man played beautifully to the “uneducated” that were looking for a savior; his portrayal of America as a dystopian world, which was framed in his “Make America Great Again” slogan, was a clarion call to the good old days where white supremacy ruled. To his supporters he sold himself as a maverick, a man beholden to no one that could smash a corrupt and dysfunctional Washington. He was the the great deal maker and promulgated the grandiose and false prophecy that he alone was the only one who could return America to its proper stature in the world. And because of his pathological lying, his ability to say whatever he needed to get the applause he desperately needs, he promised anything and everything.

The gullibility of millions of people to believe in someone who is all bluster and no substance, an emperor without clothes, saddens, but doesn’t surprise. Many in this country vote with their gut, not their mind; and their belief that he was going to take care of them in a way that no one has ever cared for them before, served as a powerful palliative for their concerns.

His divisive, race-baiting, fear mongering bluster was a powerful elixir that worked as a candidate. The pundits asked us to “give him a chance” but the belief that he could change was wishful thinking, fools gold. If you understand what drives this man and how his narcissism defines everything about him, you would have seen this coming, as with The Don: what you see is what you get! He is the sexual predator; he is the man capable of cruelly parodying a disabled reporter; he is the man who professes to care about you when he doesn’t give a shit about anyone but himself; he is a man of no principles, no core beliefs who lacks the capacity for genuine empathy and has never had a regret in his life! His shameless and brazen misuse of his power to make money for himself, his family members and his cronies attests to this.

As president, The Don has made no adjustments. Frankly, he is emotionally and psychologically incapable of it! He has no desire to really learn anything; his grandiosity is so malignant and delusional that he doesn’t think he needs to. He has “great instincts,” knows more than the generals; he is the great swamp drainer.

He really believed that he could come to The White House and run it like his real estate business, where he has total control, does whatever he wants-legal or not-is above the law and can just make bad stuff disappear. The man who would be king has done this is entire adult life without any consequences.

This grandiose sense of entitlement and false belief that the world revolves around him has led him to devalue anyone who disagrees with him. Anyone critical of him risks being attacked through his inane, infantile tweets. His attempt to de-legitimize the press by insisting it is “Fake News” and the court system because he can’t get his way on his Muslim ban, are perfect examples. He is pissed that he can’t go in to his board room/oval office and make it all happen; if everyone would just get out of his way he would take care of everything.

And he has told lies, lies and more lies and like a king, demands blind obedience from his loyalists. People like Spicer, Kellyanne, sycophantic Mike (Pence) and the rest of his foolish minions, have to get out of bed every day and find ways to deflect, obfuscate, deny or outright lie to cover for The Don’s statements.

The White House has become a House of Cards, created by a House of Lies, because the Joker in the deck is in charge. How much more absurd does it get than Sean Spicer hiding in a bush because he doesn’t want to be seen by the press.

As many have said, firing Comey could be his Watergate moment and perhaps his undoing. The Don was steaming mad that he couldn’t make this Russia thing go away. This stupid Comey guy wasn’t playing by his rules. He was disloyal to the king. In the days of yore, Don The King would have simply said “Off with his head” but he had to settle for “You’re Fired.”

That he could fire him, blame it on Comey’s handling of the Hillary email thing and believe that everyone would just say “that makes sense” is proof of the grandiose, delusional world he lives in.

There are rumblings in the White House. This is a man who has never paid the price for any of his transgressions, a man who has never felt regret about anything, a man who believes the world revolves around him, a man who said that he could shoot someone dead on 5th Avenue and his people would still love him, a man who believes he is so special and great that he has an endless amount of “get out of jail free” cards at his disposal. He is also a man who lives inside a bubble of his own imagined greatness that is slowly deflating. And as he confronts the fact that he is not the beloved savior he believes himself to be, he will become increasingly erratic, tempestuous and isolated in his own world.

This  great man will start feeling smaller and smaller and will finally start building his wall, but the irony is that he will build the wall around him. And as his isolation grows he will pathetically search for validation of his greatness by looking over color coded electoral maps, seeking solace by watching recordings of his beloved masses screaming for him at rallies. And one of these days, when he turns on CNN, he will finally get his comeuppance and hear the very words he loves to utter: “You’re fired.”