When I think about the Republican Party’s stance on science it makes my blood boil, which by the way boils at pretty much the same temperature as water (100 C or 212 F), though the salts in it may raise it slightly.

That people need to demonstrate all over the country and the world to support the efficacy of science strikes me as astonishing. The absurdity and cynicism of the Trump Administration, and Republicans in general, makes my blood boil. Oh, did I say that already?

So what’s the premise for Trump, his cabinet cronies and the rest of the Republican legislators for this science denial?  Umm, let me think. Is it money? I hear there is a new slogan being bandied about in Republican circles: “Keeping it Green and I don’t mean clean!”

On a daily basis The Don has proven that he is not a particularly intelligent person,  Most recently he wowed us when he wondered why it was necessary to have the Civil War.

However, most of the people in congress are relatively intelligent people-all have college degrees, 41% are lawyers, all have been exposed to science, yet their silence and denial of the irrefutable evidence about climate change is repugnant and an insult to decency. They all know it is real and a threat to the future of our planet; frankly, it is more of a long- term threat than terrorism.

In response to the recent March of Science The Don said: “My administration is committed to advancing scientific research that leads to a better understanding of our environment and of environmental risks. As we do so we should remember that rigorous science depends not on ideology, but on a spirit of honest and robust debate.”

This is unadulterated malarkey or in Trump world Mar-a-larkey. This cynical hogwash has the same veracity of The Don’s claim that more people were at his inauguration than Obama’s and that millions of people voted illegally so he really won the popular vote!

Another thing that strikes me about The Don’s statement is that it actually contains two grammatically coherent sentences, which means The Don was not part of their construction and odds are he was unsure of its meaning, as there were some pretty big words like rigorous, robust and ideology. Trump and rigor appearing in the same sentence is the definition of oxymoron; the only ideology The Don aspires to is increasing his self-worth and the only thing robust about him is his capacity for self-aggrandizement and lying  Also, the appearance of the word honest in his statement stimulates my gag reflex.

Speaking of gag reflexes, in late January, The Don and his science guys placed a gag order, a media blackout on people who work at The EPA and U.S. Department of Agriculture. The administration immediately tried to dial it back but just the announcement was chilling. However, they have taken down information on the government’s EPA site regarding climate change.

If the administration supports rigorous debate about science why are thousands of people in this country and around the world out on the streets? Why is he, with complete complicity of his fellow republican cronies, defunding N.I.H, the agency that does vital research on silly matters like the Zika virus, by almost 20%. What about reducing the budget of the EPA by 30%** and appointing a man like Scott Pruitt, who as attorney general of Oklahoma, sued the government on behalf of oil companies and was so deep up their ass that he was affectionately referred to as Crude? The EPA just announced the dismissal of five members of the scientific review board and is considering replacing them with business men from the very industries they are supposed to regulate!

Let’s face it: The only motive for any of this is pure and simple: greed! What other reason can you give for removing the ban on Chlorpyrifos, a pesticide that Dow Chemical makes that has been proven to reduce IQ’s in children? Repeal regulations that stop coal mining waste from running off in to waterways? ((Did you know that the president of Dow chemical gave a million dollars to fund The Don’s inauguration? That Bob Murray, a big coal guy, gave $300,000?)

Is thereAt the March for Science, William Harrison, a nine year old, held up a sign he made of a shark pleading with humanity to save him from global warming. He said “science is important because without it we basically won’t exist.”

Is there anyone in the Republican Party with a conscience? What about Mr. smiling Paul Ryan, the party’s designated family values boy wonder? I would like someone to make a sign, or better yet, develop a national ad campaign that has him holding up a smut faced child from all the coal run off that says: Paul Ryan Supports Family Values? Nah, He Doesn’t Give A Fuck About Your Children!  Or how about a sign that is the equivalent of the anti-abortionists whom he supports: Denying Climate Change Is Murder! 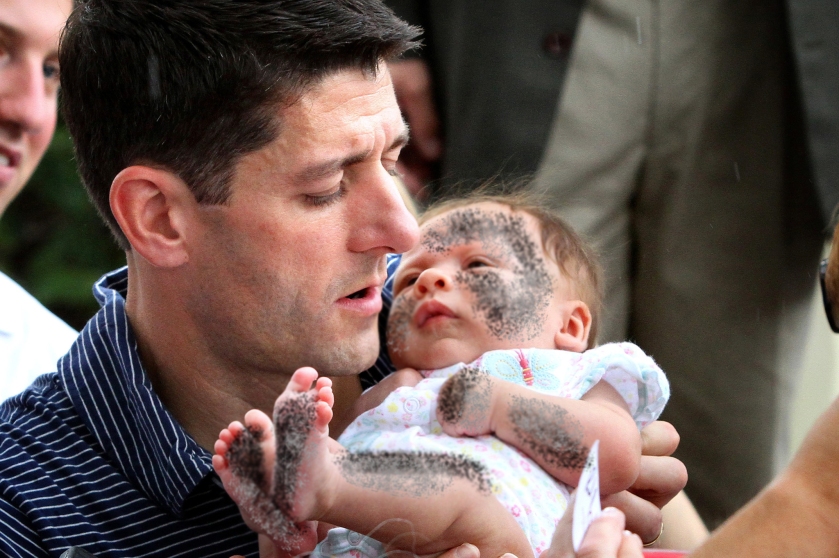 But my favorite sign from the march had a diagram that stated “Before you dismiss science Mr. President, here is the molecular formula for hairspray.” Did you know hairspray contains carcinogenic polyvinylpyrrolidine and other chemicals that can cause low blood pressure, breathing difficulty, coma and who knows what else. Maybe something in the chemicals explain Trump’s craven indifference to the future of the planet. Only The Don’s hairdresser knows for sure.**

*Turns out that in order to prevent a government shutdown congress dialed back these cuts for now. However, I wouldn’t be surprised if they revisit them in the future at a more opportunistic moment.