If you observed The Don during the campaign, you would have noticed he wasn’t prone to the googoo gaga thing that most politicians engage in- even if they hate babies- as the photo-op is just too precious and softens their image with skeptical female voters.

Maybe this has to do with the fact that The Don is an admitted Germaphobe* and would freak out if a baby drooled on him, but it is much more than that: this is a man to whom babies make no sense. They are like aliens. There is nothing in the man’s make-up that would give him a clue about how to relate to an infant or any child. The Don is a transactional animal:  the interaction with a smiling baby has no value for him. The Don needs to protect himself from being vulnerable at all costs as vulnerability diminishes him (think small hands.) Frankly, I think Mr. Bigly might even be frightened of babies!

I would love to have the opportunity to query the Trump children to ask them how many times their father cuddled with them, played “This Little Piggy Went to Market,” or just held them in his arms long enough to breath in the sweet fragrance that we wish we could bottle and take out every once in a while to diminish the impact of a stinky day. When Baron has stood by his side at public events the lack of human connection is palpable.

For The Don there is no there, there. There is no genuine connection to others, no empathy. His beliefs, his emotional responses, his (pseudo) connections to people are like cloud formations, ephemeral-the atmosphere changes and what or who he claims matters to him shifts to gratify him in the moment.

His response was to make a statement by bombing a Syrian airstrip to show that he would not stand for such an inhuman act: a Trump tweet with explosives attached to it! (Rumor has it that Ivanka whispered in his ear and prodded him to feel something.)

We can debate the value of the response, the flip-flopping of foreign policy, the lack of any plan going forward, but this response on The Don’s part is not about his caring about babies-a distraction from the Russia probe, a flexing of muscle, maybe, but babies? Who talks about finishing the greatest piece of chocolate cake in the same sentence as dropping 58 missiles? If you recall, The Don was eating a fabulous meal with his main squeeze Jared when he ordered the failed special -ops mission in Yemen. Something about some good food brings out the military man in him! 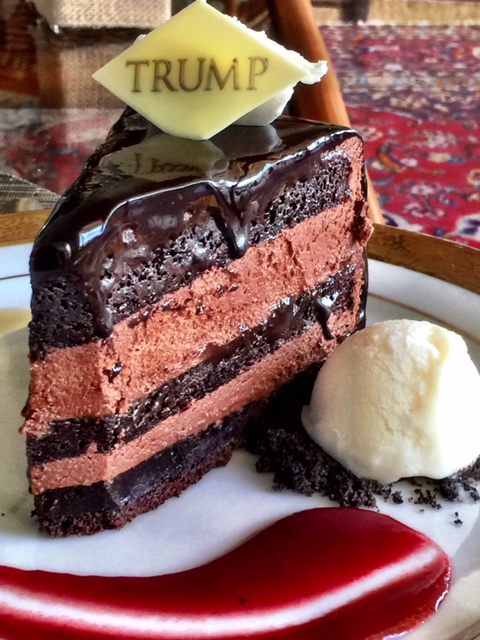 So what about the babies? If Trump were so concerned about them why doesn’t he let Syrian families with small children come to our country? This is a man who cut off health care benefits to his nephew’s chronically ill son over a dispute over The Don’s father’s will; a man who promotes a health care plan that will deprive millions of children of coverage while giving bigly tax breaks to the wealthy. What of his draconian immigration stance that separates children from their parents, causing profound psychological damage? Abolishing after school programs for children, eh? Allowing Dow Chemical to run hog wild with the use of the pesticide Chlorpyrifos which studies have shown to lower IQ’s in children. The Don is so concerned about children that he is systematically deregulating many of the protections that have been set in place to slow the pace of global warming** putting all children at risk, so more oil and gas companies can make more money. Maybe if The Don could manage to spend even an hour with a baby then he might get what he is doing to children as his policies are in their own way as poisonous as Assad’s.

*Check out my piece: “The Greatest Germaphobe on Earth.”

**Children fight back: In Juliana vs U.S. government, a group of children, ages 9-20 have sued the federal government on the premise that it has the duty to preserve core natural resources to provide for well-being and survival of our citizens. Bravo!