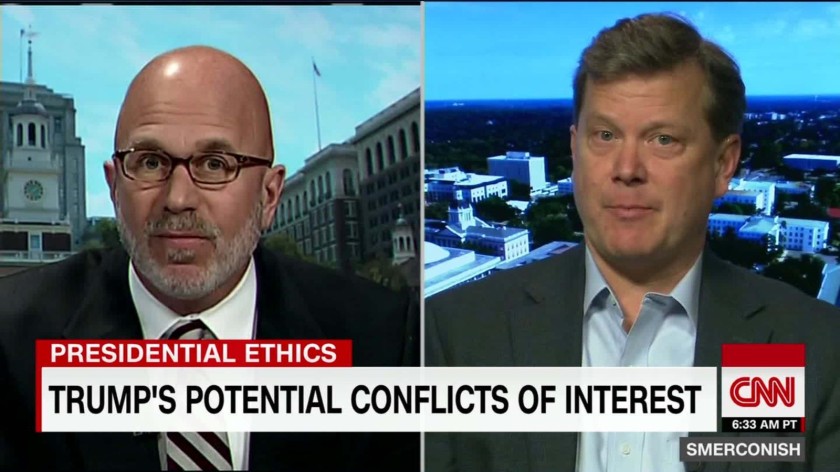 So now that Kellyanne is promoting shopping at Nordstrom to take advantage of the Ivanka fire sale, and ”The Don” is tweeting (according to some during a security briefing no less!) to take down Nordstrom for ending their relationship with Ivanka, maybe it’s time to fire up the conflict of interest ethics issue again.

Remember before the inauguration when “The Don” stepped in to chastise the Republicans in the House who had decided to clandestinely meet to vote to dismantle the only committee that could independently oversee their actions?

Weighing in as the “Great Ethicist” that he is, “The Don” tweeted back then: “I am a follower of Aerosmith Stottlemeyer’s ethical teachings. He’s a really smart guy or else I wouldn’t be mentioning him. Spinelli is good too. They would not approve of shutting down the ethics committee. Get your act together!”

After that tweet, an undisclosed report stated that Kellyanne came running down the hall in a panic with makeup on only one side of her face to do damage control. “The Don” immediately re-tweeted: “What I meant to say about the ethics thing is that I am a fan of Aristotle. Aerosmith is just a favorite band of mine and Mel Stottlemeyer was a great Yankee pitcher. Spinelli, well I meant Spinoza. LOL! “

Some said “The Don’s” tweet, where he took his fellow Republican’s to task, righted the ship. I have another theory. Maybe he just set the whole thing up? Maybe he called the orchestrator of the shutdown, congressman Bob Goodlatte, (boy, could I use a good latte about now!) and said: “Look, Bob, I want you to vote to repeal this congressional ethics thing and then I will swoop in to stop it in its tracks. I will be seen as the Great Ethicist. And when I tweet my followers that my actions restored the ethics committee, the people will adore me even more. By the way, have you seen my moral compass? All gold. It’s a beaut.”

Well, holy Spinelli, it turns out that the “Great Ethicist” is not swooping in this time as attack dog, Jason Chaffetz, went after Walter Schaub, The Director of the Independent Office of Government Ethics Committee that oversees the executive branch. According to Chaffetz, Mr. Schaub was “blurring the line between public relations and official ethics guidance” when he questioned “The Don’s” willingness to confront his potential financial conflict of interests. As this ethics office monitors the executive branch itself, the “Great Ethicist” has been eerily silent.

“The Don,” hoping to put a stop to any investigation into his financial conflicts, reached out to have a little chat with Chaffetz.

“Hey, Jason, what’s with that loser Schaub? Getting a little drunk with his power. Think it’s time he and his idiotic office went the way of the Titanic.”

“Don’t you think it will look suspicious, Mr. President?”

“Don’t worry about that Jason. We will create so many distractions–perhaps something like an attack on a judge, or call for a ban on Muslims–that no one will even know what happened to Mr. Schaub until his silly ethics office is history. And Jason, you can be assured you will be rewarded bigly for your efforts.”

“What do you have in mind, Mr. President?”

“Well, my hotel and golf course in Indonesia are moving forward and the women in Bali are amazing.” As a Mormon you people are always looking for more wives, right?”

“Speaking of Indonesia, I brought Carl Icahn aboard as a financial advisor, and he just happens to be the largest stockholder in Freeport McMoran, the mining company that leases the mine. So what about a few bouillon cubes of gold?”

“And then there’s Tillerson-so there’s black crude. Once we remove the sanctions on Russia and Exxon starts drilling, the money will be flowing.”

“Congressman, don’t be so nosey. And anyway, did you see how I handled Trump University?  It was a total piece of cake! I will win that case bigly!”

“I would have expected nothing less. By the way, I didn’t get to say hello to you at your New Year’s party and just want to say I had a great time. And it was so cool to see Joey ‘No Socks’ there. He is quite a character.”

“Greatest party ever. And Joey and me go way back. He’s been coming to Mar-a-Lago for years. He was one of the first to refer to me as “The Don.” We had some fun times, and he knew some people that paved the way for some huge deals.”

“Kind of a coincidence that he heads up the American Academy of Hospitality and Sciences and your properties have won Diamond Awards for excellence more than a dozen times?”

“Heard he had a criminal record?”

“So what. If a guy is going to give you an award you take it; you don’t tend to look up his whole life story.”

“I also hear Mike Tyson is a real fan of yours. Didn’t see him at the party.”

“Me and Mike go way back, too. I was always fond of Mike, but after he bit off Evander Holyfield’s ear, that sealed the deal. Winning is all that matters.”

“Yeah, but look at the publicity he got.”

”Speaking of Tyson, I saw you with Don King. He was wrapped in the American Flag. It was such a patriotic sight, Mr. President. Sounds like he and Tyson had their problems. Didn’t they?”

“Well, you could say that.”

“Didn’t Tyson once call King a ‘wretched, slimy reptilian motherfucker?’ And that he would ‘kill his own mother for a dollar?’”

“Yes, those were his exact words. Tyson sued King for a $100 million because he shortchanged him big time while he was promoting his fights. I also heard that King was convicted of murder. He stomped one of his employees to death because he owed him $600. That’s pretty brutal Mr. President…. By the way, are you ever worried about the optics of being seen with all these guys?”

“Listen, Chaffetz, like I said, don’t be so nosey. Everyone fucks up sometimes. Now do me a favor and get up to Capitol Hill and get going on this Schaub thing. And Jason, if you have any resistance tell me and we will get Joey ‘No Socks’ involved; if he is not available, let me know and I will give Don King a call.”

“I serve at the pleasure of the President.”