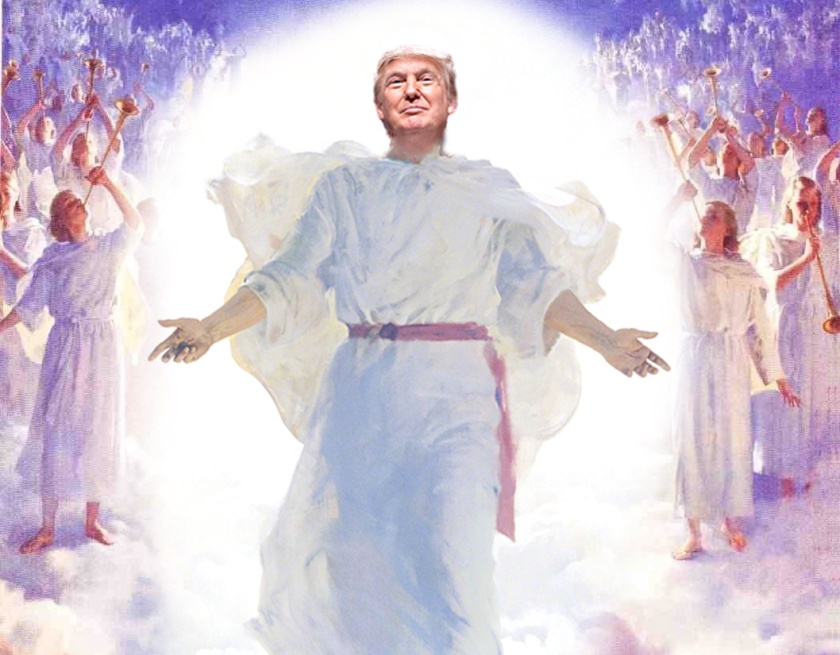 “Hey Bannie, could Christmas get any better? 2016: The culmination of my greatness.”

“Did I kick some ass or what?”

“What’s a few letters? Words have no meaning anyway. Isn’t that what I proved? It’s all in the presentation. I would never have even used that phrase, but it was in Putie’s lovely Christmas card to me.”

“Must have been a real thrill to get a card from Putie.”

“Just the cherry on top.”

“Bannie, you know the other day I looked in the mirror and I seemed to be glowing. Look, don’t you see there is an aura?”

“After all, it is Christmas.”

“Hear me out, Bannie. So I am without equal, the greatest most powerful man in the world and now there is this mystical aura around me and I have been reading the Bible….”

“In the beginning and?”

“No, just ‘In the beginning. Got distracted. Had to tweet some asshole that he was worthless.”

“So do you think it is possible?”

“What, that you will read more than “In the beginning?”

“What are we talking about here, Bannie? I’m always first.”

“Totally, always first. So who’s this him you are alluding to?”

“Yeah, Bannie! Don’t you see it? It all lines up. Becoming President was a miracle, now the aura, now Christmas, and Putie even mentioned in his card that I was the new savior.”

“So you are the second coming?”

“You know I hate coming in second.”

“Maybe I am more like the new and improved version.”

“And after all, he was a pauper, and he was a sorry-ass, inclusive, PC type. Not my style. Bannie, I am going to save this country and perform miracles. “Doesn’t J.C. do something with water?”

“Yeah, turning it into wine.”

“Well, in my reign I will make water undrinkable, so that only those who can afford wine will have something to drink.”

“There is another miracle I remember — something about catching a fish with a coin in its mouth? I remember that one from my childhood because it was about money. Do you remember it, Bannie?”

“The story goes that the tax collector was demanding Peter pay his taxes on the temple. He didn’t have the money, so Jesus told him to catch a fish and the first one he caught would have the money in his mouth for the taxes, and it did.”

“That is so awesome. Guess I don’t need to catch any fish since I don’t pay taxes. Ha!”

“Clever, D.T. That’s why the masses voted for you.”

“As the new and improved Jesus, the miracle I am going to perform is to make sure rich people pay so little in taxes that they won’t need to catch any fish.”

“Clever. That’s why the masses voted for you. Too clever! The New Improved Jesus Christ.”

“And what’s with that saying ‘The meek will inherent the earth’.”

“It’s a very funny thing to say. Hey Bannie, isn’t that in the section of the Bible called ‘Jokes by Jesus’? Comes right after the section on ‘Miracles,’ right?”